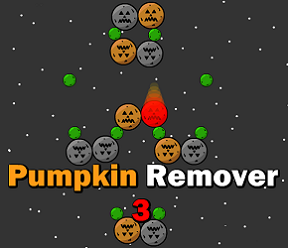 It's Halloween again, time for ghosties, ghoulies, goblins, and lots and lots of jack-o-lanterns. Somewhere in those multitudes of pumpkins that are needed for the season some have gone rotten; and like zombies those bad pumpkins can infect the good ones so they must be eliminated, preferably without harming the happy, ripe pumpkins. And no, you can't just build a giant machine to chuck them somewhere, lest they spread their deadly infection further afield. Hey, that's as good an explanation as any for the physics puzzler, Pumpkin Remover 3.

Play all the Pumpkin Remover games:

This is the third Halloween in a row that we've seen the deadly pumpkins arrive and once again the objective remains to simply remove them with a click of the mouse. Well, sort of. Pumpkins can fall in different directions, and you still need to clear all of the bad pumpkins without losing the good ones. Just watch out for the black pumpkins, which can't be exploded with a click, and the flaming ones which wreak their own kind of havoc. With only 20 levels of pumpkin removing madness this is a quick and easy seasonal delight, spiced up with some really bad jokes every five levels. So be a mensch and take a few minutes to make the world safe for all the good, ripe pumpkins out there.

I think the pre-game ads on this one are a bit skewed...the game loaded up about 99%, then the "buffering" screen for them popped up and froze. :[

Windows 7, Google Chrome if that has any relevance.

[I also ran into a problem, but the problem is intermittent and doesn't always happen. I tried several versions of the game from a variety of sources, and the problem occurred no matter where I tried. Reloading fixes it... eventually. =/ -Jay]

I love those nice and easy puzzles for just in between. And had no problem at all with loading it on winxp and firefox.

But what I really stopped in to say about this game was about the sound effects. I miss the shouted 'YAY' after successful pumpkin removal.Although I appreciate the more muted farting noise after a failed attempt :)

Lovely, as always. This one seemed a little easier, but I'm hardly going to complain about that !

And 6th time was the charm, time to play.

[I'll contact Gaz about it. Maybe there's something he can fix on his end with it. Sorry for the nuisance. =/ -Jay]

Good news is, game play took longer than the refreshes/load times getting it to work....but just barely. Fun but short game, I'm a fan though, I even have the Red Remover app on my phone.

Hey guys. I just read Jays email saying there's been some problems with the game. I've emailed him an ad-free version now which should fix it. If it's still not working trying coming back later after he's had a chance to upload the new version.

UPDATE: A new version is up now that fixes the issue reported earlier.

ok, so i got under par on

I love these games, but I feel like my favorite part is the jokes. They remind me of the jokes I'd get on popsicle sticks when I was a kid.

Level 19 can also be done under par.