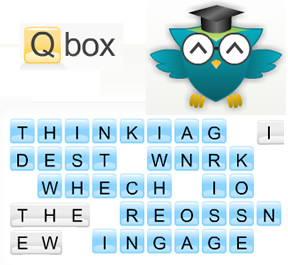 Owls are the arrogant scholars of the animal world. They mock humans with their little glasses and mortarboards; always flying around thinking they're smarter than us. We cannot let this continue!

Show those smug little owls what's what by playing Qbox, a word game from Qwizzly. Qbox is a neat little variation of a Jumble or a cryptogram, in which you try to decipher famous quotes from one of three historical eras. These quotes are laid out in a grid, and the letters have been scrambled within their respective columns only. Swap letters in the same column and when the correct word is formed it will lock into place.

Solve a level quickly and you'll be rewarded with a time bonus. Flashing tiles also represent bonus points, and in the later levels, columns will be locked until you unscramble a word elsewhere in the grid. Click on the smarty-pants owl for a hint if you're stuck.

QBox is quite satisfying as a coffee break game. The difficulty ramps up nicely in later levels and your progress is automatically saved, so you don't need to indulge in a word puzzle marathon if you don't want to. In a pleasant intellectual feature, after completing a level, click on the author of the quote, and you're taken to the Wikipedia article on said author. It's a perfect game for a lazy Sunday morning, and even that smarmy little owl can't spoil your fun.

Reminds me a lot of Cryptograms in Games Magazine...always one of my favorites.
Cute review, too...drat those owls!

There is an option for having the sound on, but I haven't yet heard anything. My speakers work, and I can hear sounds from all other games. Is anyone else having this problem, or is there just very little sound to the game?

@Dooreatoe - The only sounds are when you move letters. It's a slight popping sound kind of like a cartoon bubble. Once you finish a quote there is a bit of a slot machine style jingle/melody/riff that plays as well.

Pretty fun game even if some of the "modern" quotes are just warmed-over old quotes.

I liked the game, but came across a glitch that makes it impossible to continue. When I had a letter placed correctly to complete a word, I quickly (but accidentally!) moved the letter to another word where it became frozen in the wrong spot, thus making it impossible to finish the level I was on... Otherwise a good thinking game!

Try rebooting your computer Dooreatoe - some other app has hijacked your sound driver. Happens to me all the time.

I really need a graphics card. :(

It would be nice if the last quote in a series would tell you the source and let you read it. Instead, once you get the answer it jumps you to the "you win" screen. Um. Yay.

That's a minor nitpick though, this is a good game. Wasn't a fan of the locked columns, felt too much like they were adding "gameplay" for the sake of gameplay. The puzzle is fine as it is. More quotes please.

Like JIGuest said, it's annoying that you don't get a chance to read the last quote. Hopefully, that will be fixed.

The flashing letters for the bonus words are really distracting. I think a less obtrusive highlight would be better.

Also, there's an error in the first Middle Ages quote - a "that" that should be "than".

But anyway, it's a fun game!

This game is addicting. Decent bank of quotes too, only had a a couple repeats on two play-throughs.

My only gripe is that the mouse interface gets kind of clunky at later levels when the letters get smaller.

This game is kind of fun but needs some serious tweaking.

When did Thomas Paine get transported back to the middle ages???

And why won't it let me read the last puzzle of each level and see who the quote is from?

Seems like the game creator just found some random quotes and threw them together arbitrarily.

Annoying to have to move the mouse all the way across the screen (vertically, anyway) each time, especially with a trackpad (and particularly on the later levels, where the letters get smaller)... I wish there was some way of controlling it through the keyboard. It gets a bit boring once you get to huge quotes and aren't sure where to start (after you've already done several in a row). As such, I didn't actually finish any of the three categories. Nice quotes, yay for wikilinks (one linked to "The Dhammapada", where I created a redirect to the actual page (no "the")).

I'm kinda tired, so I guess that might be detracting from my ability to play... Now then, time for homework.

Several typos in these quotes.

And what's the deal with the time limit on the later levels? Heck, even if you had the words written out for you above each line there would be no way to arrange the tiles in order in the time given.

More tweaking and fixing dangit! This has potential! :)

Either I'm being especially dense, or the time runs out much too fast to get the bonus points.

Also, most of those "middle ages" quotes are not from the middle ages at all.

Very nice game. Still working my way through Old quotes. Only minor gripe is that when I get a flash of insight and 'see' the words, the game can't keep up with my clicks, and I get the "letters have only been shuffled vertically!" help/reminder screen... or if I've turned that off, the letters just don't swap.

Because, as noted above, the last quote is not displayed in the way the others are, I have collected them.
The final quotes in each category are as follows:

- In comparing various authors with one another, I have discovered that some of the gravest and latest writers have transcribed, word for word, from former works, without making acknowledgment. (Pliny)

- All truly wise thoughts have been thought already thousands of times; but to make them really ours we must think them over again honestly till they take root in our personal expression. (Goethe)

- I have learned, that if one advances confidently in the direction of his dreams, and endeavors to live the life he has imagined, he will meet with a success unexpected in common hours. (Thoreau)

Those are not the same final passages that I got.

If you press options and then navigate away from the page and then go back and return to the game it pauses the timer and also stops the flashing letters from running out so you can take as long as you want. Definitely a bug but it can be helpful to get the extra hints.

After the first couple-four levels on each range, the time bonus becomes rather useless.

I also noted that even though it took me 15 minutes to get a quote (yeah? got a problem with that?) the timer still showed it took 2:01 to complete.

Thanks for the vote of confidence, but I know I'm not that fast. Good game, loved it!

I'm no fan at all of cryptograms but this game is super addictive. I finished it after several hours. Great design.

Personally I find that feeling pressured by a timer takes away from the experience. Word puzzles like this should be peaceful and contemplative. It's not so bad in the first one or two levels (each era), but the longer, harder levels are awful to speed-complete.

If I want speed and reflexes, I'll play Canabalt.

the game does not end when you finish the three levels. There are a lot quotes in the data base. you can play again and again. The bug at the end of each level has been fixed