The world needs a QuestLord, and you're just the lucky person to do it! In QuestLord by Eric Kinkead, you play the only hero in a retro-styled, turn-based, first person RPG. Also, it's your job to save the Shattered Realm from destruction! You start with little more than a basic set of adventuring equipment and head into the wilderness ready to face skeletons, giant rats, living trees, and most frightening of all, greedy shopkeepers! 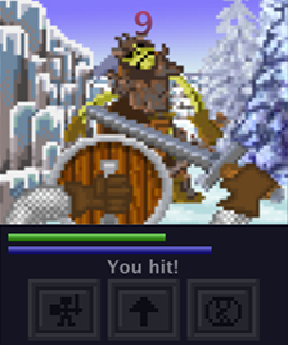 QuestLord will remind you of games like Dragon Wars, Eye of the Beholder, and more recently, Legend of Grimrock. This is a good thing, as the genre is sorely underrepresented on mobile devices, so QuestLord has some very hungry appetites to appease. Move forwards and backwards by tapping the up and down arrows on the screen. The rounded arrows let you turn left or right, while the other large buttons open the inventory and map screens. Attacking is accomplished by swiping the top part of the screen, and commands such as talking, casting spells or blocking appear as small icons by your health bar when applicable.

Start the game by choosing between a human, elf and dwarf player character, each with unique strengths, weaknesses, equipment and abilities. As you explore the terrain you'll encounter your fair share of enemies to defeat and secret areas to explore, including plenty of treasure to pick up and sort through (gold! delicious gold!). Best of all, you're not trapped indoors and will trek through snowy mountains and pristine forest glens, which look fantastic in their pixel art glory. Everything is filled with enemies and twisted maze-like passageways, of course, but when you've got a handful of quests to work on and the fate of the world is in your hands, you can put up with a few minor inconveniences from time to time. 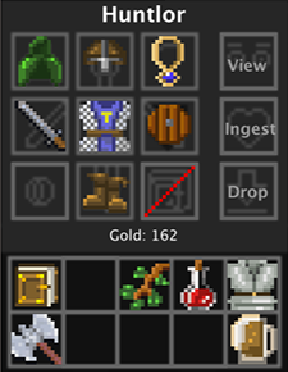 Analysis: QuestLord scores really high on a little something called "replayability". Not only is the game non-linear in nature, but each character class starts in a different part of the world, giving you three slightly different adventures to play right from the start. To top it off, there are over 160 (rather massive) maps to explore, spanning over half a dozen unique terrains. And if you're short on time, dive in for a quick match instead of the full story, which sends you to a randomly generated dungeon to quest around and loot until you die. Hooray!

Perhaps the game's only drawback is that it doesn't always cater to the same central audience. Take one look at it and you'll think "retro RPG for nostalgic gamers", but play it and you'll see it's much more streamlined than games of old. Reassessing your original judgement, your next thought will be "casual mobile RPG", but once again, not quite right. QuestLord is surprisingly difficult and requires some planning, cunning, and maybe even some grinding to stay alive. It's much closer to a casual game than a hardcore RPG, however, so don't be afraid to try it out!

QuestLord is great. There, we said it. It may not be the end-all RPG to satisfy every mobile gamer's dreams, but it's definitely a well-made experience that does a great job at appealing to a wide crowd without alienating anyone. A lot of attention went into making the game something special, and once you start questing, you won't want to stop.

NOTE: This game was played and reviewed on the Nexus 4, iPad 3. Game was available in the North American market at the time of publication, but may not be available in other territories. Please see individual app market pages for purchasing info.

Anyone know what to do in the quad chamber? Been trying get for hours :D

Did you ever figure out what to do in the quad chamber ? I have been stuck there for a month now and I am ready to call it quits and put this game in my Kindle Fires storage. Cant defeat the minotar guy he knocks my shield down, cant get any more health or earn gold enemies dont give me reward points anymore to level up. I have the best armor I can get, tried using magic also but to no avail. HELP ????