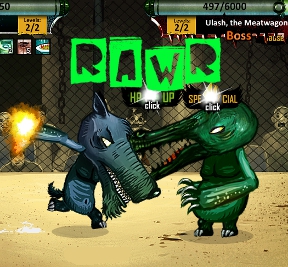 Okay, so the plot of the mean ol' businessman trying to destroy a forest and being stood up to by plucky kids is a tale as old as direct-to-video, but how often do you hear about those same plucky kids using ancient, unspeakable beasts to do the job? Shadem's fighting simulation Rawr puts you in charge of training and directing the titular beasts to become powerful enough to stand against the black-hearted champions who want to destroy the forest. Sort of like Captain Planet, but with fangs and a gaze that induces madness. And bloody cage brawling. And gross genetic manipulation.

Choose and name your Rawr, then spend your time clicking around the map to assign skills, buy items, take part in events, or simply have your Rawr duke it out against other beasties. Combat is automatic, though you can help your little killer out by clicking two icons of the same type as they appear to gain power-ups or healing, and following the onscreen prompts to get more damage. The damage your Rawr takes can be healed by chowing down, which advances the time by a day, but more importantly, can also give you big bonuses. Purchase special ingredients at the shop to craft recipes (earn more by spending chef coupons) that can can temporarily grant you more strength and health on top of healing you up, and even grant you permanent stat increases through their own leveling track. Eventually, you'll also be able to visit a trainer who can teach new abilities... for the right price. Be warned that abilities can only be equipped if you have the appropriate number of coloured crystals available, earned through leveling up. If you defeat bosses, you may even get the opportunity to modify your Rawr at a lab, inducing mutations that will change your monster's appearance and its skills. You know. Provided the concept of injecting your li'l buddy with genetic gloop and warping their very being doesn't creep you out or anything. Wasn't that an episode of Pokemon?

Rawr is more than a little odd, weirdly hilarious in a twisted way at times, and suffers somewhat from some awkwardly phrased directions and explanations, but is still enjoyable and addictive. The art style is fantastic, and even if the creatures animate in a clunky "little wooden puppet" sort of way, the design is creative and great. You can't really call the gameplay particularly in-depth, since the whole thing winds up feeling repetitive after a while, but there's just something compulsively playable about it. The gameplay is simple and fun, the story is silly but interesting, and it's a welcome spin on the "train a thing to do a thing" genre, which has probably only rarely had so much ichor and weirdness in it before. The copious amount of blood and frankly mildly disturbing monster design, both of which are at odds with the strangely light-hearted and feel-good backstory, means this isn't one for the kids or those of you who prefer less gross gaming. But if you're a little twisted and looking for something to fill a coffee break with surreal style to spare, give Rawr a look. Just... don't maintain too much eye contact when you do it.

Been playing this game for a couple of days over on brand X (sorry, JIG). Its fun in spurts, but tends to get repetitive. Also, I don't really feel like I have a whole lot of control over the combat, or even the RPG part.

I like the game, but the bosses seem a bit over powered. I had a lv 8 rawr, but could beat a lv 6 boss because it had double my health. Something seemed a bit off by that.

Hi bluegriffin18! Are you making sure to eat food before battles? Remember that different dishes and ingredients can give MASSIVE stat/HP bonuses, and I think the game expects you to do that.

When I try to equip some combinations of skills, the game won't let me! If I have hypnosphere selected, classic fireball has a black diamond over the center of it. But I have enough slots. :$