Despite the fact that I can't play a flute and I don't enjoy Earl Grey, I like to call my husband "Number One" a lot, but one thing I'd never call him is Redshirt, since according to the laws of the universe, that's basically a death sentence. So it might not seem like a great omen that that's both the title of this indie science-fiction sim from Positech Games and The Tiniest Shark and the title of the position you start out in on the great big space station you work on. But hey, when life hands you lemons, you make lemonade, as long as you aren't vaporized, imploded, or dissolved into goo on an away mission. 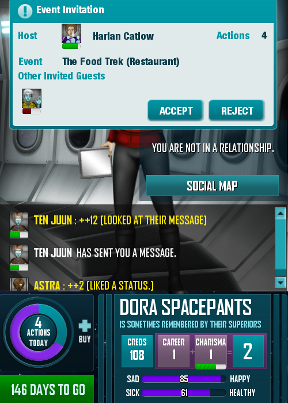 Gameplay takes place entirely through"Spacebook", the starship's social media network that all employees use, and revolves around both making the right connections and relationships with the rest of the staff, as well as grow your character enough to rise through the ranks of the various jobs on staff. You start off on the very bottom rung of the ladder, and if you want to make something more of yourself, you have to not only increase your skills by taking part in various activities, but get to know the right people. You can check out all the various jobs, as well as their requirements, by opening the career panel and hovering over a job to help you plan ahead. Of course, some things you can't plan for, like the mandatory away missions that are often fatal (and depressing) for your fellow team members... or the mysterious countdown timer nobody seems to want to talk about...

Since the game takes place entirely within social media, everything you do from posting song lyrics, to complaining about work, tagging friends, and much, much more impacts your relationship with other people. Each person has their own different likes and dislikes, and their own relationships with other people as well, which is something you'll want to keep an eye on to make sure you're not making anyone jealous or inviting two people who hate each other over for drinks. Events, which cost Creds earned from work, can be anything from using the Virtuo-Augmento-Deck to a seminar or just a night out for dinner, give you various benefits and skill increases while also changing your relationships with whoever you invited... provided everyone gets along and is interested in whatever activity you set up. Don't worry, it's not a one-way street... once you start making friends, they'll start chatting you up and inviting you out too! Each day you'll have a certain number of actions available to you, and once those are spent, you'll either have to spend Creds for more, or sleep until tomorrow. 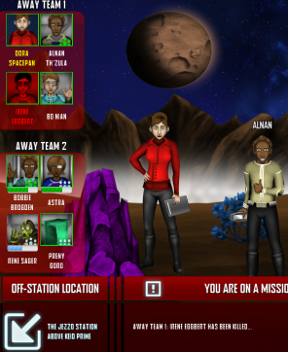 Analysis: Though initially Redshirt seems like a terrifyingly labyrinthine interface of menus, submenus, and sub-submenus that would make, say, simply figuring out how to raise a certain skill a nightmare, a lot has been done to streamline the process. Simply clicking on a skill, for instance, will tell you not only all the jobs it's required for, but all the events that can raise it... and allow you to click on that event and instantly be taken then instead of navigating to it through the events menu. It makes for a game that plays a lot more smoothly than it looks at first glance once you learn the shortcuts. Still, the game is unique and distinct enough that not having a demo seems like a mistake.

Perhaps unsurprisingly, you'll most likely grow to hate away missions since the sheer amount of unavoidable deaths that happen on them will immediately tank your character's mood. You'll get bonus pay for them, and there's always the chance you can get promoted to a new position if the old occupant dies, but they're still just largely a huge annoyance. What's interesting, however, is that while I complained that in the beta version NPCs largely felt interchangeable and dull, in this full release that seems to have changed. Characters are still randomly generated, but they still manage to wind up feeling distinct from one another thanks to a wider pool of dialogue possibilities and the tendency to stick to certain tones that develop a personality. It's surprising the way you'll wind up developing opinions about and attachments to people... so just cross your fingers that your new bestie doesn't wind up on an away mission.

Redshirt itself has a remarkable personality, and is chock full of references to everything from Star Trek to Gordon Ramsay, and the way it manages to sneak these in cleverly does a lot to endear. Even though it's easy to pick up whenever you have time, it's addictive, with the sort of "one more day" style gameplay that makes it hard to step away from. Especially when you consider the replay value from the randomised events and characters. Fans of space operas and life simulations will want to check this one out even if its not for everyone, since Redshirt's creativity and charm makes it stand out from the pack.

Kinda wish there was a demo. Not sure if I wanna spend 10 bucks on a game I can't try. :( Looks interesting, though.

I can understand, and I agree. I know that demos are time-consuming for developers to produce, and there's always a LOT of debate between developers (and players) as to whether a game "should" have a demo, since many developers feel their work should speak for itself. However, for me personally, a demo can have a huge impact on whether I decide to buy a game, and there are things you just CAN'T know about whether you'll like in a game no matter how many reviews you've read when it comes to personal taste, so there have been games I've been interested in but unsure on that I've had to pass over. After all, not everyone has a ton of disposable income. :)