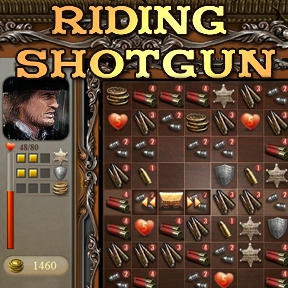 How's your trigger finger feeling today, partner? Itchy? Excellent. How about your noggin? Is it feeling muddy after a night of too many sasparillas at the saloon? Well, try to wrap your 10-gallon hat around this one: cowboys aren't just about gunfights, fistfights, horses, sunsets, and aliens. They're also about thinking, and that's the setup here in Vadim Diduk and Oleg Pereverzov's new Western-themed puzzler, Riding Shotgun.

Riding Shotgun is a turn-based strategy title where your "player-with-no-name" (who looks oddly like Owen Wilson) tries to defeat numerous bad guys in one-on-one shootouts while traveling to town. You do this by strategically manipulating a wagon in straight lines across an 8 x 8 board. The spaces on the board include various attack icons that do 1-4 damage, while other icons are collectable powerups that increase your overall attacks, defense, and health. The rules allow you to move your wagon horizontally by clicking the mouse on any icon-filled tile to the left or right, while your enemy does the same vertically, up or down. If you have more health points than your opponent when there are no more moves possible, you win and get to advance. If you have less health or it's a tie, you have to play the level again. 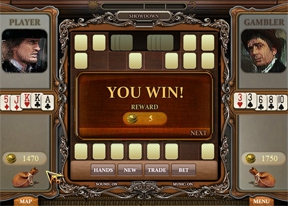 While the basic premise and level structure is the same, Riding Shotgun has some variety to gameplay. Each level has a different board setup, and some levels have certain goals that award you bonus gold to spend at the Trader's for permanent powerups. There are also "timed" levels where you have to defeat your enemy before dusk, complete with the level getting darker as each turn progresses. Finally, one unique level has a basic form of draw poker, letting you gamble some of your earned gold against a computer opponent.

Analysis: There are many things to like about Riding Shotgun. The strategy-turn-based gameplay has an addicting quality to it, and things move fast enough each turn to keep things moving. Riding Shotgun also has a nicely-stylized interface and graphics that helps to set the Western mood, accompanied by solid sound effects and an oddly compelling (though not quite Western-sounding) music soundtrack. The rules require a bit of explaining, but the in-game tutorial during the first few levels is quite effective. If anything, the game's shortcomings lie in its untapped potential. More random elements (offered on one level with the dice icon) would have been interesting to see, as well as more story/RPG elements and items to collect. It's also worth noting that the game gets somewhat unbalanced in your favor once you spend gold on permanent upgrades, though it does make beating the game easier.

The strategy element to the game comes in deciding which icon to move towards. Do you grab the 4-damage shotgun icon if you see that, on the next move, your enemy might take a star to do more damage? Or do you grab a weaker attack icon that will set you up to steal a shield the next round? On the later levels, when your character starts off with less health than your opponent, such movement decisions are critical to success. Riding Shotgun offers you with a fun casual puzzly experience in a setting that often doesn't get enough attention. Care to exercise your both your brain and six-shooter? Then hop on board and start Riding Shotgun.

Note: Two of the same poker hands with different cards are not a "tie". For example, my two pair, queens and threes, beats his two pair, nines and sixes. Grumble.

Cody F, that way is quite standard in most poker rules (that is, all variants I know)

This then makes the rest of the game very easy.

Interesting game, but the music doesn't fit the western and cowboy environment.

in fact, there isn't really an end, is there ? I found myself with some trophy (legendary defenser) and one award (danger bend) among three... I don't see where you can win the two other awards. Weird. :/

Notice that the names of the awards correspond to three of the locations on the map. Those three locations have special bonus requirements; you can complete those after you win the campaign.

I didn't realize I could just pass by the gambler by going back to the map, so I ended up taking all his money and put him in debt :P

I liked the game in general, but the poker module has some definite problems. You can't really make a killing here due to the single bet (and limited bet system), but the biggest problem with poker is in what the game considers a "tie hand". The best example I can offer is that I had "Ace, King, Jack, four, two". The computer had "Ace, Jack, Ten, Eight, Seven." That is not a tie. High card under the ace (my king) should have won. The strategy element is a lot of fun though and the sound effects are nice.

John - because neither you or the CPU player had a hand, ace is the high card; and you did in fact tie. Were you both to have a pair of aces, then your king would be the deciding high card.

@Anonymous: I every form of poker I've played, if the high cards are tied, the tie is broken using the next highest cards. (If those are tied, compare the next two and so on...)