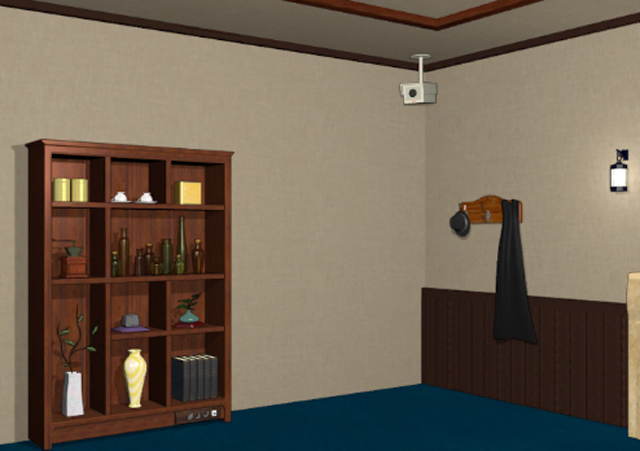 This game is a remake as their other recent installments, the original Room 7 Indigo Blue can't be played anymore. The graphics have been remarkably upgraded, pleasant tune was added and some puzzles slightly changed, and some are new. The room has enlarged and the playing time extended. Well done remake indeed!

You find yourself trapped in a room inside which you were obviously teleported. No teleport in plain sight, true, but no door neither...well, it's not the first time you got stuck in a room without obvious exit so don't get worried about that and start with the exploration. This place is strange. A device with unknown purpose, barred fireplace, alien plant in a vase and switched off surveillance camera. But as in all Ichima Coffeedo's games, everything has its sense and place in carefully and cleverly constructed gameplay, so go on and look for items and hints. You'll find your way through. You won't be dissapointed. It's very pleasant playing experience (again).
The game has autosave and one ending.

Have a good time with another great escape game!

Excellent game, not too easy, not too difficult. I often check Ichima for new games and often replay the old ones. They make some of my favorite escape games, like Tesshi-e and Neutral. Since cell phone apps came out, swf file escape games are nearly gone. I have saved hundreds and can replay them until I am dead! Some cell phone games are pretty good too, if I ever can't use my PC... I'm 56, so I go way back to the first Zork (interactive fiction, non-graphic text games - INFOCOM! later bought by Activision) and escape games
Thanks for posting,
Jaybo

This was a great game! Some surprising twists in there, and longer than I expected. I don't think I ever played the original, but I hope we see more from this developer. Thanks for posting!

Have you played Indigo Blue? This room has the exact same shade of blue, but the puzzles are far from identical!

(Hint system is available in-game and is in general less spoilery than previous games, so feel free to try it out!)

You start off facing a corner of the room for some reason. There's a tall white machine between the two lights. On the right, a bookshelf has a door that opens to perfectly match a stopper on the wall, and inside it you find a box with two buttons that cycle through star shapes having different numbers of points against black and red backgrounds, as well as a row of three books next to a wooden box with three square holes. The bottom of the bookshelf has a sliding door stopped by a tiny gray piece with a keyhole.

In case you missed it: look up above the bookshelf to find a hole in the ceiling.

Turn right to face a set of display shelves holding a wide variety of items. Other than the coffee-related stuff, you also see several glass bottles next to some tiny text that actually reads "the cork bottles are just a distraction", a rock which seems a bit cracked, and an unusual plant in a vase filled with water. The whole shelf has a button panel at the bottom right, but one of the fancy-shaped buttons is missing.

On this screen, you also see a surveillance camera mounted to the ceiling, as well as a wall rack with an empty spot.

Turn right. The fireplace is sealed up and it has a lever slot, but you can open up the clock to find a coin with a tiny hole. The table has a box of shiny gems that has a shiny orange key on its side. And you can zoom in on the stained glass window to view a familiar clue.

Turn right. On this desk, you see a second clock that you can set, as well as some books. One of the blue books has a tiny white hole in its spine. One drawer has an orange keyhole and the drawer below that has four buttons that flash when clicked. If you click on the chair, you'll see a third drawer that contains a rubber band and a jar with an insect on some paper that it has eaten through.

And that's it! Surprisingly, the potted plant that appears on the first/last screens is not important at all.

Use the key to unlock the top drawer, which has a photo and a bottle of plant nutrients.

Look at the plant in the display shelves and then add the plant nutrients to the pot.

Two of the plant pods open up to reveal star shapes!

Use that clue to unlock the box in the bookshelf.

Click the left button 9 times and the right once, then push OK to receive a gold wine glass.

Look in the wine glass to find a paper clip, then click the clip to straighten out the end.

Use the unfolded clip on the coin to reveal a tiny piece of paper that appears to be blank.

Also use the clip on the suspicious book to find a knob.

As hinted by how you found the insect, you can place it on the blank paper. Some tiny holes already start to appear…

and when you close out of the examine screen the holes suddenly appear much bigger in your inventory!

Use that clue to set the clock on the desk.

Use the knob on the lock under the bookshelf, and then open the door to find a clown card and a box with five sliders.

Use the clue from the bottles to unlock the slider box you just found.

Ignoring the bottles with corks, you find that the bottles from left to right are 4th, 2nd, 1st, 3rd, 5th shortest.

Considering the level of the shelf as a baseline, this means you need to drag the sliders up 4, 2, 1, 3, 5 positions.

Open the box to find a remote controller with the word Security printed on it.

Use the remote on the security camera, which moves around a lot.

Use that clue to unlock the bottom desk drawer.

The camera points towards the
⌜⌟⌝ ⌜⌞⌜
corners, so push those buttons on the drawer to open it and find a gold mask.

You can now do something indicated by the photo in the top desk drawer.

Comparing the photo to the room, you find that it shows an extra item on the wall rack: a golden mask!

Place the mask on the empty spot, and a third clown card pops up.

Place all three clown cards into the bottom box in the bookshelf, which give you a button.

Place the button in the empty spot at the bottom-right corner of the display shelf. Now you can click each button there to make it change color.

Use the clue from the stained glass windows to unlock that button panel.

The stained glass panels with the same shapes as the buttons are:
blue, yellow, green, pink.

Set the buttons accordingly and push the OK button, and the shelf slides to the right and reveals a secret room!

This room only has a picture of a lady holding fruit, but moving the picture aside reveals a darker marking on the wall. The tray under the picture holds a gold key.

Looking closely at the floor, you find that the checkered pattern is distorted at its right edge.

So click that corner and lift it to find a lever handle.

Use this gold key to unlock the white machine, which opens up a tray with a gold letter G on it.

All that's in the fireplace is a flight of stairs leading up. While you follow it to the top, you hear the shutter slide down behind you.

At the top of the stairs, you see a portrait of a girl telling you to gather your courage and jump. Easy for her to say when she's just a picture speaking golden text!

Enter the room with wooden floor. The light beam comes from a hole into the room below, but you can't do anything with it yet.

Turn left to find a small table with a four-digit box and a projector with no slides in it. (There's also something else here that we'll get to later.)

Without any clear exit here, you decide to backtrack down the stairs. But the door won't open, so you read the note beside it.

The note tells you of a hidden spot upstairs, opposite the small hole.

While looking at the projector table, click the far left corner to find a trapdoor, then open it and look down to find a couch.

All you can do through the small hole upstairs is look down. What could there possibly be to see anyway?

Opening the bookshelf door places it directly under the ceiling hole, but that door closes when you back out.

So use the rubber band on the handle (and the wall stopper) to hold it open.

Go back upstairs (yes that means pulling the fireplace lever again) and look through the hole (from upstairs) again to find a four-digit clue.

Place the film in the projector and flip the red switch to display a clue. (Click the lit portion of wall to zoom in.)

The clue shows five golden objects and a hand which points to a compartment in the floor where you can take a hammer.

The game isn't giving you a hint for what to do with the hammer. Go look for a suspicious spot you haven't used yet. Actually, two spots.

Use the hammer on the wall behind the lady-with-fruit portrait. Behind it, there's a smooth featureless bust wearing a gold necklace.

Also use the hammer on the cracked rock in the display shelf, then take the gold dog ornament from it.

Use the clue from the projector to do something to the white machine.

You should be holding on to four gold items, while the projector shows five. Of course, the missing one is the mask that you left on the rack. Take it back!

Place each of the five gold items onto the tray of the white machine, and they get absorbed into the display which eventually shows you where the exit is.

No time to gather your courage. The exit is already open and you're leaving through it!

Ichima has shifted their website to a new domain. There's some redesign, and the older Flash games are no longer mentioned.

The shift means that all the old links are currently half-broken because they will redirect to the new homepage instead of individual game pages.

974 Views
0 Comments
chrpa— Jayisgames needs your help to continue providing quality content. Click for details Welcome to Mobile Monday! In the first game by Johnkichi (Masayuki Takagi) is your first objective to open the door leading outside, and cope with an emergency...  ...

6,213 Views
3 Comments
chrpa— Jayisgames needs your help to continue providing quality content. Click for details This Friday we've got a brand new escape by Ichima Coffeedo and it's a big one! Not a remake of an older flash game - it's new, though...  ...

5,660 Views
24 Comments
chrpa— Jayisgames needs your help to continue providing quality content. Click for details Welcome to Weekday Puzzle! The first game with letters by rubyleehs is fun and you can spend A LOT of time with it - notice, that it...  ...