If you like visually striking puzzle-based indie adventures, HandMade Game's Rooms and its sequel Rooms: The Main Building, have been coquettishly making eyes at you. Now with an extra dash of lightly spooky whimsy comes Rooms: The Unsolvable Puzzle, where you play a little girl trapped in a mansion with a big secret. The strange structure appears out of nowhere late one night, and when Anne can't resist investigating, she finds herself trapped inside... though not alone, since her lantern's started talking to her! Inside this place, the rooms don't behave as they should... they're broken up into pieces that can be slid and shuffled around, and locked doors, ladders, and more can help or impede Anne's progress. With a whopping 144 levels strewn across four different mansions, Rooms: The Unsolvable Puzzle delivers a casual, storybook-styled, puzzle-centric adventure that's fun for pretty much everyone that unfolds its tale as you go, 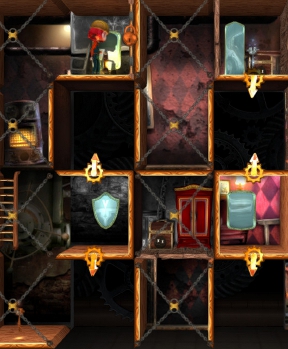 Playing the game is pretty simple. Each level represents a room that's broken into blocks, and you want to help Anne reach the door. You can only move the section that Anne's standing in, and you can slide it one space in any unoccupied direction by clicking on the icons that pop up on the top, bottom, and sides of the room, or by hitting the corresponding controller button. Ladders, as you might suspect, can help you climb between room pieces as long as there's no floor or ceiling in the way, while the colour-coded telephones you stumble across will actually teleport you between them when you click on one. Just when you've got that handled, you'll have to deal with room-swapping wardrobes, and a magical puppet that, well... you'll see. You can move around as much as you like to solve a level, but if you do it in a certain number of movements, you'll gain three golden puzzles pieces, though that number will diminish the more moves past "par" you take to win. There is not, unfortunately, any sort of "undo" function, so when you've really made a mess of things and all your puzzle pieces are lost, you simply have to restart the whole level.

While it may look like a LAIKA film unfolding on your screen, Rooms: The Unsolvable Puzzle focuses more on crafting its puzzles than dazzling you with a lot of unnecessary bells and whistles. That's not to say it isn't lovely, because it is, with its sweeping soundtrack and doll-like characters, and the shadowpuppet style used for the cutscenes fits the tone like a glove. The Unsolvable Puzzle introduces new elements very slowly, however, and by its very nature is one of those games whose carefully crafted levels you can stare at for a long time before realizing the obvious solution was staring you in the face all along. 144 levels is... rather a lot, and nobody will ever accuse The Unsolvable Puzzle of not giving you your money's worth of content. The problem for some people, however, will be that there's so much of it that the story feels almost like an aside, and at times it feels a little repetitive in the beginning as a result. It isn't until later on, when you're juggling more than one or two mechanics at a time, that it really starts feeling like it's flexing its muscles, though it never quite gets as viciously challenging as you might expect/hope given its moniker.

Still, the more I played it, the more I appreciated what it was trying to do, and the more I found the levels whipping by. Your remember when you were little, those big storybooks that were like the size of your torso you could prop up on your knee and entirely vanish behind as you work your way through it? That's what Rooms: The Unsolvable Puzzle feels like, only it engages the child inside you, whatever your age, without talking down to the grown-up "please I am a VERY SERIOUS GAMER and I need VERY CLEVER PUZZLES" part of you either. There's a sense of wonder in its presentation and concept that feels like it completely lacks any of the cynicism popular in other modern games, and everything about it invites you to settle down and solve a puzzle or thirty whenever you have a spare moment. Rooms: The Unsolvable Puzzle is, quite simply put, smart... also sweet and satisfying if you want some alliteration in your day. It's not really the sort of game you'll want to barrel through in one sitting, but it's one you'll want to keep coming back to.

The link to the original Rooms download isn't working for me. Anyone else have this problem?

I'm playing this game for a week, and it is nice and fun.

I am having a blast with Rooms: The Unsolvable Puzzle.

It's certainly not for the feign-of-brain. Some rooms are very, very tricky. A full week of evenings, and I'm only halfway through the 4th mansion.

Next week, how do I sign up to create a walk-through?!

Obsessive person that I am, I have beaten this game and won all the trophies.
Working on recording all the rooms strategies.... can't help myself.
Love this game!