After the rainy season tears apart a series of islands known for their fine crafts, someone has to restore the villages there to their former glory. The king chooses that person to be you, partly based on the criteria that you do not wear a fluffy wig (rich coming from a guy who seems pretty fond of silky slippers...). Thus off you go in Royal Envoy, with the king's adviser in tow, to engage in town planning of such high speed it makes pitching a tent look like a multi-year project.

Royal Envoy is an incredibly addictive mix of strategy, city building and wack-a-mole. Hopping across a series of islands, you have to visit the respective villages on each and repair them. In reality, though, you are playing little logic puzzles. Each village has a set of goals — build certain buildings, meet upgrade requirements, attain a specific level of civic happiness or make a set sum of money. In your way is the clock, obtuse pirates and the odd piece of undergrowth. In your arsenal: workers, tax collectors and a growing catalog of buildings at your disposal. 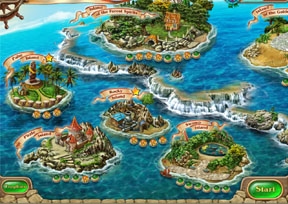 Workers build and upgrade stuff, tax collectors keep your fiscal future intact. Houses — which start with cabins and go all the way to mansions — generate revenue through rent, while sawmills and workshops bring in the wood, and markets and banks let you grow or manipulate money. Finally, there are upgrades that you can use to create more happiness, if the need calls for appeasing the mobs.

So far this must sound like a typical strategy game where you plan a city. It certainly wears that jacket. But Royal Envoy is about finding the most efficient and fastest way to the goals at hand. Let's say a level wants you to build three chalets, each upgraded to three stars. Upgrades and buildings require wood, so you need a sawmill. But two building spots are being blocked by a pirate seeking a bribe, so you'll not only need cash, but you'll need to generate a lot fast. Thus, apart from buildings to provide rent, a bank will be a smart idea. Or you can build a market, where you can exchange a little wood for a lot of cash. Whichever route you choose, now you have to carefully balance the action: sending collectors for tax; workmen to do upgrades or cut wood; when to use cash and wood for what task, etc.

Sounds complicated? It isn't. And once you get started, it's hard to stop...

Analysis: Royal Envoy manages to create a creative range of challenges throughout your island adventures. When a level starts, you have time to take in the goals and think of the strategy ahead. This isn't always necessary, because with the exception of a few levels you can beat any challenge at the first attempt. The question of beating the clock — and thus collecting a golden star — is a different one. And it might sound silly, but you'll want those stars. Initially the game holds your hand, giving basic challenges or guiding you through new buildings that have been unlocked. But later on you are often given a devastated village, a set of goals and a 'good luck' slap on the back. Alternatively a level could have a very specific layout and beating it depends on figuring out what to build when, what to demolish and so on.

At its heart it is a lateral puzzler with a huge emphasis on speed and thinking on your feet. The most frustrating parts come when you have to wait for something to happen, like a load of wood to be finished. In fact, when such pauses seem too long you start to become suspicious that you are going about the challenge all wrong - and chances are you're right. It is all too easy to get engrossed with every growing challenge, so fortunately there are tons of levels to complete and Royal Envoy will keep you busy for a while. But it is equally easy to pick up and put down as you need it. And the controls are a simple matter of clicking: this game could translate very easily to a device like the iPad.

Visually it looks very good, though the attempts at appealing to as broad an audience as possible does leave the vapid story and characters feeling very juvenile. The plot is clearly meant for kids, but the puzzles themselves are perfect for all ages. Less able players will work more at finishing levels while more experienced ones will have the goal of beating the clock in mind.

In the end my greatest regret was that I have had to power through the game quickly for this review. I would have loved to move through it at a leisurely pace, taking in a few levels every day. Then again, a lot of those pesky gold stars still allude me, so I will be going back.

A Collector's Edition is also available. It contains a number of bonus levels along with a smattering of additional, just-for-fun content. Remember that Big Fish Game Club Members pay only $13.99 for Collector's Editions (or 2 club credits), and collector's editions count 3 card punches of 6 total needed for a free game.

Island 5: Island of the Forest Spirits

Island 6: Island of the golden Sands

Island 7: Island of the Mountain Rivers

Island 8: Island of the Fruit Forest

Island 9: Island of the Mighty Volcano

Congratulations, you have finished the game. Now you may replay all levels to get gold where you might have missed it or play all levels in expert-mode.

Special thanks to Kayleigh for this fantastic strategy guide!

Island 5: Island of the Forest Spirits

Island 6: Island of the golden Sands

Island 7: Island of the Mountain Rivers

Island 8: Island of the Fruit Forest

Island 9: Island of the Mighty Volcano

Congratulations, you have finished the game. Now you may replay all levels to get gold where you might have missed it or play all levels in expert-mode.

Special thanks to Kayleigh for this fantastic strategy guide!

I have seen many walkthrough but this one is weird. I'm stuck on level 43. when you are in trouble on a level a walkthrough should have every level available so you can see what needs to be done. I find this walkthrough a waste of time.

[The walkthrough above has level 43 under the heading Island 7: Island of the Mountain Rivers. Click on the spoiler to find what needs to be done for that level and how to achieve those goals. Doesn't that address what you're looking for? -Jay]

I have found the only way to beat level 32 and get the gold star is to build the 2nd workshop BEFORE I reconstruct the bridge.

Thank you for this awesome guide. I was stuck on 3 levels, could not get gold for anything, then found this, and tada, so far gold star on all levels. Addicting game :)

The walkthrough for Level 55 doesn't match my Level 55 for some reason.

The walkthrough says to start two workshops and tear down the third before paying the Bandit or digging the treasure. I only have two workshops...

Is there a walkthrough for the bonus levels? I know there is for the first section on the main site, but there are still 2 additional bonus sections that aren't covered. Anyone have anything?

Level 10 is much easier if you build the sawmill next to the bank, and the 5th cabin on the right side. All houses will be happy, and you no longer need to demolish a market to build a 6th house.

I agree with bfonvill's posting for June 12, 2010 I also only have 2 workshops and the other 3 are blocked by a pirate on level 55. Anyone get past this obstacle to reach a gold star??? Would like to get to the expert level since this is the last one that I have to do. Thanks, Catcat54

Note: some steps can be done in paralell, depending on workers availability

Thanks so much for this walkthrough. It is clear, easy to follow and really helped me on those pesky levels.

how do you build a lantern on level 15 on swamp island?

Thank you so much for this wonderful walkthrough.

There are problems with the walk-through for some of the levels. Particularly Level 39. The first step says to add siding to all the villas. Step 2 says not to repair a villa. Step 7 says to demolish a villa when it needs repair. This is contradictory because adding siding protects the house and it will not need repair.

i dont understand level 24...please help me to finish the task...thanks

Kayleigh's walkthrough is great, but for level 49 it is much easier than her solution. You never have to go to the left side of the screen at all.

That's it. I had at least a minute of time left after I finished :-).