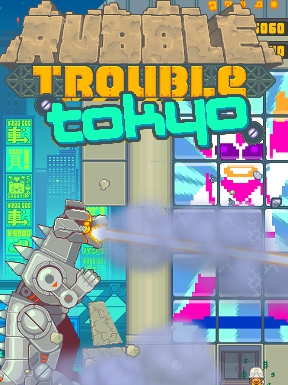 You're in trouble... rubble trouble, that is! The sequel to Rubble Trouble (New York), last year's physics puzzle destruct-em-up from Nitrome, has arrived! Rubble Trouble Tokyo puts you back behind the wrecking ball with the only crew no insurance will touch. After the good work you managed in the last game, the crew has been sent to the bright, shining metropolis of Tokyo to do what they do best; get rid of old, condemned buildings with explosive style. Of course, it doesn't take long for your workers to get sick of boring ol' nitro, and before you know it there's giant mechanical lizards, choppas, grabbers, and more all up ins. Can you do your destructive job and earn your pay without causing any property damage?

As before, on each level you have a monetary goal to meet, and limited tools at your disposal to do so. Demolition items will appear at the bottom of the screen, and it's as simple as clicking the name, and then clicking onscreen wherever you want to use it. But be careful; not only do some items come in limited quantities, but certain levels also have conditions that must be met (or avoided), so think before you go throwing explosions and heavy machinery willy-nilly. You might need to safely retrieve a worker, or manipulate your surroundings so that nearby properties are safe from flying and falling shrapnel... fail at either, and you may find that you don't have enough money to reach your target.

There's a lot to like about Rubble Trouble Tokyo, from its beautiful, catchy soundtrack to its wonderfully detailed, richly coloured environments. The new toys at your disposal are clever and creative, and often really entertaining to watch and play with. (Who among us has not wanted to mechanically burninate?!) On the downside, the physics can still be fairly frustrating; rubble is a little unreliable and can be weirdly "springy" at times, with entire floors bouncing up and down like a pogostick on one solitary square of blocks. Some of the game's thirty levels will also require a bit of experimentation to solve, since the employee patter, while amusing, doesn't always necessarily state how to use new tools as effectively as you might hope. Still, Rubble Trouble Tokyo is a fun, explosive, beautifully visualised little game that will appeal to fans of the original with an appetite for destruction. And speaking of the original, it's since been rebranded to Rubble Trouble New York, and contains two new levels and a very special final stage, so if you're a fan you'll want to check out the new content if you haven't already. In the meantime, slap on your construction hat, pack up your stereotypical red box lunch, and stuff your pants full of poorly contained dynamite... you've got a job to do!

The sumo guys can have a girder attached. Took my 10 minutes to figure that out...

Cams, I was stuck there too for a while until

I realized you could attach girders to the Tsumo wrestlers.

Ah... So that's why they mentioned the

how do you do job seventeen?

Whatever, here's screenshots of both:

How do you beat job 11 without crushing the buildings?

I managed to complete this game without too much difficulty. In my opinion, this one is slightly better than the original.

I'm just getting the indefinite spinning loading circle, no game. I've installed the latest versions of Shockwave and Flash from the Adobe site, no joy. This is on a PC using Firefox.

how do you pass level 7?

how do you beat level 9

how do you beat level 11

OK, so finally I got the time to finish up this game, and here's what I thought:

At first I went in a bit disappointed that the graphics weren't by Simon Hunter, but Stefan Ahlin managed to capture his style pretty well and create a nice-looking game. I wasn't too keen on the rather stiff animations (especially on the Godzilla robot), but otherwise it was not bad.

The new gameplay modes surprised me, and the girders were a particularly good edition. I think if the level design was better, the game could have been a real physics puzzle, a la Transformice (one of the greatest games ever IMO), but instead the girders found use only in preventing things from flying off in every which direction. Instead of making you think, the levels turned the game into a trial of 'let's put this here this time and hope that this little block goes left instead of right!'

Still, cool and funny situations (as usual from nitrome); I especially liked the wrecking ball sumo wrestlers. The game introduced a lot of new stuff almost through its entirety as well, though, as with many nitrome games, I wish the ending cutscene was more satisfying.

I extend my usual complaint with this game as I do with most nitrome games: nitrome is a big studio -huge, in fact, for a free flash game developer- why can't they use all their people and add just that last little bit of polish and effort that makes a game truly memorable. More than one coder can work together, and this game shows that more than one designer can as well, so why not combine forces and produce one really, really, really good game instead of a bunch of just good ones?

One nitro on the bar the sumo dudes are standing on. One nitro between the two big explosives on the right to form a column of three. On the left put one nitro horizontally between each explosive to make two rows of three. The positioning seems to be pretty exact, so you may need to play around a bit.

I need help with 27 please.

Hiya can someone please advise on level 11? I have tried everything. I cant seem to figure out where to use the girders? As all the places I have tried so far they have disappeared :S

how do you pass level 7? please, someone answer!

get the grider first and fix the lowest layer with grider as a protection.

just drill through the middle tube

I need help with level 24! @bearharry How do you fix the lowest layer?

To get the guys down just attach the girders to triangle they're standing on and to the middle of the middle pole.

how do you beat level 9?

If your on Level 30, you should notice this:

There's a screen showing another Nitrome game, "Off The Rails" as a mini-game.

Note that the game in the screen is fully playable.

If you beat the "Off The Rails" mini-game, you'll unlocked a secret level.

Go to the right and use the nitro on the triangle under the crates. Build barriers at the far left in front of the house with no barriers. Use air strikes

I still can't do Level 11. Screenshots anyone?

I only have 2 main criticisms with this game right now: 1. it drives me up a wall how the demolition crew won't pick up a powerup crate unless it lands with no debris (not even a tiny piece) between it and the ground after I blast it off a building (which rarely happens), requiring me to use up precious tools to get it down. It's only a foot over your head! Just reach up!

2. I can't say this for sure since I haven't played through all the levels yet, but one level with that awesome Mechagodzilla tool is not enough. I realize it's ridiculously powerful, but that thing is too awesome to only use once.

I'm stuck on level 14. I use the grabber to grab the steel piece where the little dude is standing and gently lower it down on the ground. After that, I'm free to blow up everything.

Send the first Pachinko ball down the middle (it only travels downward). You should gain 8 more balls, use those on the building

I just finished the game and really enjoyed the ending, with the

To the far right, blow up the blocks holding the green boxes with your nitro. Once they hit the ground you will have barriers at your disposal to place on the ground. Place them at the bottom of the leftmost building and you're good to go.

Seeing as you have infinite tools, you just have to be patient. I recommend drilling off one layer under the Larry clones to loosen the ''box'' holding them in. Then use the grabber to slide it down a ramp. Take off the ''lid'' with the drill then carefully turn it over. Two or three Larries can die, any more and you'll have to restart.

This is almost simply luck : you have to drop the pachinko balls so as to blow the squares on the side of the building (concentrate on either three). Once you manage to clear the way for a ball to get to the bottom, blow it up next to the building and it will do the rest.

How do you get past level nine?

blow up the building left of the dojo... it didn't kill it, right?

there was no exposed shrapnel...

if only there was some way to hold back the debris...

pin it to a wall?

Could someone help me with level 11? Stupid shrapnel...

Please help on level 7? I don't know how.