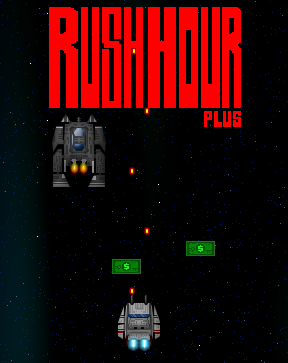 Sometimes in life, you get the feeling that it's time to be moving on. Theo's been working in the Zyborgian Slave Mines for a couple years now, and has finally saved up enough space-dollars to buy himself a cruiser capable of making the Kessel Run in less than twelve parsecs. Now, if he can just get through this orbiting traffic, he'll be ready to start his new life. Originally conceived by Christopher J. Rock, with later additional development by Bryson Whiteman, Rush Hour is a solid retro arcade space shooter.

The mechanics are nothing new: blast enemies, collect space-dollars, purchase upgrades, repeat. However, Rush Hour Plus benefits from a nice dose of humor, especially in the selections of space-billboards you pass (and shoot). The disconnect between the pixelated aesthetic of the cut-scenes, and the sleeker presentation of the main action is, admittedly, a little jarring, perhaps the result of the game's bifurcated development. That said, it doesn't impact gameplay, leaving us with a cool coffee-break length shoot-em-up, perfect for anyone who's ever thought of how a laser would be just the thing for slicing through an afternoon traffic jam.

Perhaps I'm being too picky, but a parsec is a unit of distance, not time.

Tell that to Han Solo, man.

I'm going to be that guy: there is Star Wars Expanded Universe lore that explains how the Kessel Run is usually this big detour around a cluster of black holes, so Han Solo's boast is that he's such a good pilot, he can skirt the edge of this extremely dangerous gravity well close enough to shave maximum distance (and therefore time) off the trip. [/thatguy]

So, was anyone able to get $3500 for the gun upgrade? Or was that a secret theme of the game, "chasing the almighty dollar."

I didn't mind the gameplay, but for a shmup, it falls a little short.

In the beginning try hitting the signs to get some money.
Then, at the first shop you shouldn't buy anything, unless you really need some armor.
Then try to get as much money as possible hitting non-moving targets, or if none are there move alongside targets to destroy as many as possible.
This way you should be able to get 3500 by the time you reach the 2nd shop. if not then again don't spend anything unless you need armor.
and you will certainly have enough by the time you reach the 3rd shop.
it is better to get it at the 2nd shop because with the gun you get cash easily so you can buy speed and armor at the 3rd shop.