Sango - Tales from the Coral Cave 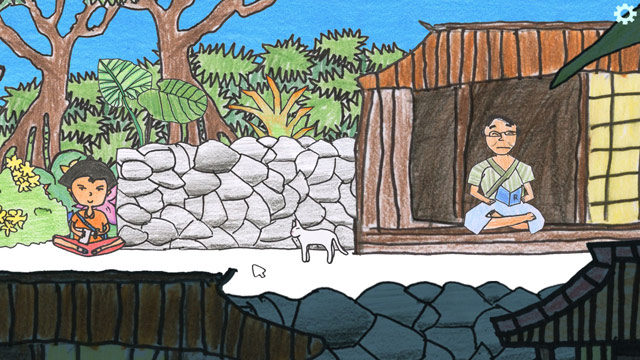 A few months back in the good old days of 2017, I reviewed Yûrei Station, with not only its unique take on the style of narrative driven by beautiful hand-painted scenery, but also as a project accomplished with the help of brilliant young artists. Today it is a pleasure to share another installment in the same spirit of collaboration between adult coders and budding artists. But don't think Atelier Sentô simply rehashed things - this time, you'll explore a pair of adventures in the Coral Cove, and find that although the story is completely new and fresh, the tale is no less magical. A boy lays lazily in the sand next to a cat, with a set of colored pencils, a book, and an unbounded imagination. When you click on it, though, he'll eagerly sit up and show you the world he has created through pictures.

In Tales from the Coral Cave, you'll immerse yourself in Japan's southern islands, Okinawa, where it feels like the summer never ends. There are two distinct characters to choose from - a cat and a turtle - lovingly adorned in a picture-book of sorts describing legends of centuries past. You'll need to pick one, but when you're finished, you'll probably want to see the other story as well!

First up is the story of the Village of Crabs. As a small turtle just born on the beach, your instinct is to head straight for the sea and (pardon the pun) dive in. But something distracts you - the sad gaze of a small girl looking out over the horizon. She says that she is waiting for her brother, recounting the extraordinary tale of how he lives at the bottom of the sea with other marine life. She is awaiting his return so that they can once again live together. The little baby turtle wants so badly to help her and cheer her up, but is this a task too great? How can a little thing like her ever transport a human so much larger than her? 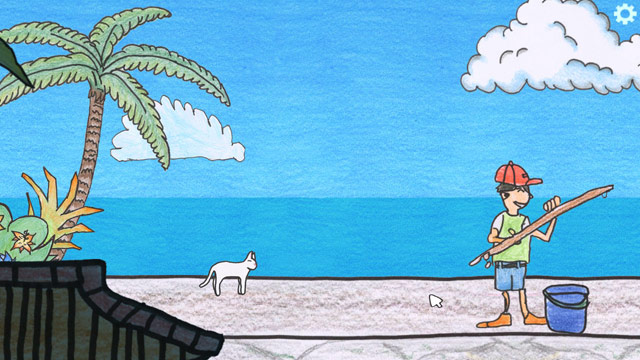 The second tells you the story of the Song of the Whale. It's perhaps hard to notice every little thing going on the world, but you would think people might be more aware of this particular event. Playing as a cat, Mochi, your only care in the world for the moment seems to be your particular affinity for fish and your hope to steal one from a nearby fisherman's bucket - and the bucket, remarkably, seems to be empty! After all, what goes on up in the air does not concern cats - you'd much rather sneak between the shadows. But when the fisherman claims he hasn't seen a single fish the whole morning, despite it usually being a great spot, you know something is amiss. Suddenly, after seeing a huge shadow over the surface of the ocean, you look up to find...a huge whale floating up above! And not only that - it soon starts to sing the saddest song she has ever heard. Is it enough to distract Mochi from her grumbling stomach and go on a quest to help the whale? Can you find out what's making the whale so unhappy, and if the legend of a certain waterfall is really true?

Controlling Sango - Tales from the Coral Cave is pretty simple. You can navigate the entire game by clicking with the mouse, which will move your character left and right. Sometimes when you speak to someone, a list of options will be offered and you are asked to select one. Some of these are puzzles, and others are simply flavor text. When there is an object you can potentially pick up, the cursor will change to reflect that. If you press escape you can change some options, including the music and sound effects volume. The game also offers you a choice of three languages - English, French, or Japanese. The only real "improvement" I might suggest for this game would be the inclusion of voice acting, as with the right choices, it could add even more to the adventure. Maybe the kids themselves would have been good choices, if they speak the other languages...

The immersion of the beautiful graphics is made no less impressive by the fact that they were created in workshops by ten-year-old kids with colored pencils (school in France). The personification of the animal creatures, from small to large, creates an aura of something just beyond the curtain of this world. The music fits perfectly with the tale, transporting you to a wistful, carefree state. It's also suitable for all ages with intuitive, one-button style controls, so whether you want to help a kid explore their imagination or reignite your own, you owe it to yourself to take a visit to the Coral Cave. In the meantime we'll eagerly await Atelier Sentô's next great adventure and mystery.