Sanitarium, the classic 1998 point-and-click horror game from DreamForge Entertainment, is one of those games that's on a lot of "must play" lists. Despite being out for over a decade, and having had it recommended to me by any number of people who know my taste for the macabre, I'd never gotten around to playing it. Now, thanks to Good Old Games, this cult classic is available again on PC for old fans to enjoy, and a whole new generation of gamers to discover.

The night after making a great discovery, you're on your way home to your wife when your car goes off the road... or were you? According to the staff of the asylum you wake up in, you're simply a patient who managed to steal a car and nearly kill yourself in the process. And why shouldn't you believe them? After all, you can't even remember who you are, let alone why you're there. But there's something a little off about this particular establishment, as you'll soon discover, and maybe you're not as crazy as everyone says you are. At least, not yet. Maybe if you can discover the meanings behind the strange... "hallucinations" you've been having you can prove your sanity to everyone. Of course, that's assuming you aren't just a delusional nut case... 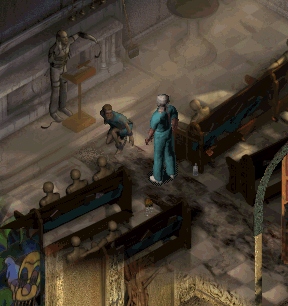 Right-click on the screen and hold to move the protagonist around, and left-click on an area to search there. A wagging magnifying glass means you've found a point of interest, a set of teeth means something you can talk with, and a hand means you can manipulate something or pick it up. Once you're carrying something, simply click on yourself to open a small context menu, and click on an item to select it. If the item you're holding can be used in a particular spot, the item will appear to "shine" when you place it over top of the area, and you can click again to use it. Of course, not every item works in every situation, so make sure you try everything to see what works. After all, it's not like you have to worry about anyone thinking you're crazy!

Analysis: Despite being billed as a horror game, Sanitarium isn't particularly scary. Most things are presented just slightly too cartoonishly to be really frightening. Sure, there are creepy moments, and a fair bit of unsettling imagery, but for the most part the story plays out like the sort of schlock horror films that were popular in the late eighties. You know, like it would have been introduced by Elvira and titled "TALES FROM BEYOND THE 5TH DIMENSION" and prominently featured a synthesizer in the soundtrack? In part, I also blame the lead character, who sounds less like a determined hero, and more like the sort of person who got taped into garbage cans a lot in junior high. (Or, strangely, a lot like Dr Egon Spengler.) This is not a bad thing by any means; there's a sort of ghoulish charm inherent in the occasionally cheesy dialogue or outlandish scenarios that makes the genuinely spooky moments all the more enjoyable. 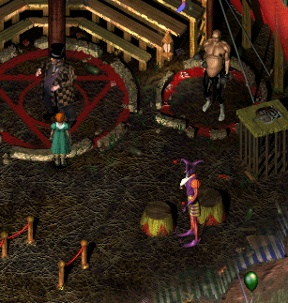 The puzzle solving in the game is all fairly intuitive, provided you're the sort who typically goes everywhere and exhausts all dialogue options with everyone. The problem is never figuring out what to do with the items you've got, but finding them to begin with. Some of the items will give off a very small sparkle when you can interact with them, but it's easy to miss it and the items simply fade into the scenery, usually because they're fairly small. This can lead to a lot of mindless clicking and backtracking around areas as you try to find what you may have missed. Maybe it wouldn't be as much of an issue if your character moved at anything other than a sedate stroll. There are also a few action sequences where you have to fend off attackers that are implemented a little too awkwardly for you to be anything but relieved at how infrequently they happen.

Despite its age, Sanitarium still looks pretty good. The environments are big and detailed, and character models are unique. The voice acting is a little hit and miss, with some characters sounding more believable than others. Thankfully, even the worst of the lot aren't unbearable to listen to, and the whole experience is an atmospheric exercise in storytelling. The vivid hallucinations your protagonist suffers as the story progresses unfold in a clever way, and you'll soon discover there's meaning in even the most inconsequential of exchanges. The story is excellent at giving out just enough information to help you connect the dots, but also to hook you into playing further.

As a classic of the genre, Sanitarium still holds a lot of appeal for fans. In its time, it showed players that horror could be bloody but still cerebral, and as such elevated itself above the more common hack-and-slash scares. Despite some clunky missteps in its pacing and a few annoying gameplay decisions, it's a quality piece of work that shouldn't be missed by anyone who has any interest in a good story... or has a screw or two loose themselves.

Interesting to see some old PC games being revived here. The crucial question is, though, will old Activision and Sierra games get into the fold?

I've still got the disc for this game, and an old computer... I think I've just been inspired to go and play it again!

About 6 months ago, I heard that the guy that did the UI for sanatarium is doing the UI for Diablo 3 so I looked it up. (I think I heard it in a blizzcast episode?)

Anyway, I didn't have the time to play through a big adventure game (I'm terrible at solving puzzles) so I watched an entire 6 hour long playthrough on youtube.

If you listen carefully, the little boy fishing by the car wreck on the farm with all the mutant children has a distinctly homosexual accent. It's pretty awesome, he's REALLY getting into the voice acting.

And thankyou for the feature!

I absolutely loved this game, when it came out first. I imagine it's still as good, but I'm not gonna pay for it twice. But I recommend it to people who hasn't tried it.

Dora, you really know your stuff. Another great selection from back in the day. I had this one and played it too.

It was sooo long ago, I don't remember too many details about the story, but that it was a good, creepy game that played out well. Fun experience.

http://www.youtube.com/user/Adkit2#g/c/E50D27DF4F83907F
This guy's "Let's Play Sanitarium" series is so much fun. His Swedish accent and snarky comments are pretty great. Kept me from getting too creeped out about a lot of the subject metter in the game itself.

Oh, shoot, I didn't realize my comment might be considered a violation of the "no link dropping" rule! Sorry if it was, feel free to delete it. I thought that since it's not my YouTube it would be okay, but there's no way to prove it's not mine so... yeah, sorry again. New here still. >_>

Just wondering; why is this game tagged as a browser game?

[Thanks for pointing that out. Removed. -Jay]

Hoping that someone is still patrolling these comments. As of Sept. 20, 2010, Good Old Games has posted this message:

"First of all, we apologize everyone for the whole situation and closing GOG.com. We do understand the timing for taking down the site caused confusion and many users didn't manage to download all their games. Unfortunately we had to close the service due to business and technical reasons."

The purchase link no longer works. I remember playing this game with my cousin when I was a kid and would have loved to play it again. :(

Is there another link where it's available for purchase?

[At this point in time, nobody knows what will happen at GOG.com. There are rumors that it's a publicity stunt. After all, it came as a complete surprise to some of us who have been following what they've been doing, and they've only just a few days ago released libraries of games from a couple high profile publishers. We'll know more about it on Wednesday this week. Since GOG has been about the cheapest place going for classics such as this, I'd hold tight for a few days to see where the dust settles. ;) -Jay]