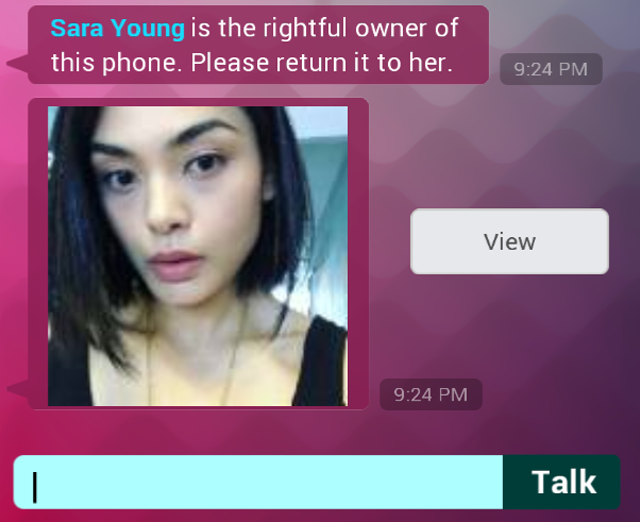 One day, you find a stranger's phone and pick it up to examine it. As you start to dig through it, though, it isn't long before the phone's built-in software, IRIS, senses something is amiss. "Where is Sara?" it demands of you, asking for its owner. It becomes clear that you're going to need to help find Sara, and that this knock-off intelligence system is quite capable. You interact with it in a realistic mockup of a smartphone interface, inputting commands, flipping through apps, and typing in questions or comments with a prefilled palette of options.

If you thought it would be a nice, simple matter of dropping the phone off at Sara's house, you will soon find out that you are sorely mistaken. As you try to piece together the fragmented memory of the phone and unlock photos and information, you figure out a dark secret. Apparently Sara and some of her friends have gotten themselves entangled in some very dark activities, where one can allegedly watch people being killed...live.

The game is played through an interface much like a phone, and can be controlled using your mouse. You can use the keyboard to type options when prompted for responses or when a passcode is needed to access further information.

Although it starts with an interesting premise, the plot and character development is somewhat limited. Most of the choices are quite superficial, and the one meaningful one near the end is presented in a way that doesn't quite make it clear what you're doing. If you're not intrigued by the opening of Sara is Missing, you will probably not be strongly persuaded as you delve deeper in. It does have a number of good points and a few well-timed jump scares though, so if horror is your thing and you want to try something with an experimental feel, give it a shot.

Neat idea, but yeah...too superficial. This game is almost completely on rails: every action you take points you with a big flashing arrow to the next one. There's only one "puzzle" to solve, and only one choice that has any significance, leading to one of three (very similar) endings. Not that I was expecting a "Walking Dead"-sized game tree, especially for a pay-what-you-wish game that goes all the way down to free. But about the best I can say for it (apart from noting the solid visual design) is that it doesn't drag things out too long.

I agree, but the thing you have to keep in mind was that this was made in 24 hours for a contest.
It looks nice, but I think they tried to add to much into the idea, which caused the overall quality to go downhill. Maybe if they tried to make it a bit simpler they could focus more on certain concepts and make a more decent game.