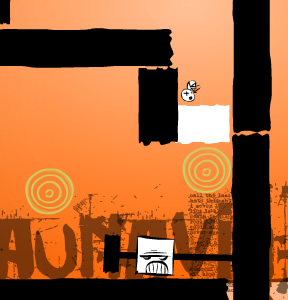 The autumnal showers begin, the air grows cooler, and the seasonal search for warmth and comfort begins once again. Just like our little Saunavihta Vortex fella. He is so vulnerable to the cold, that his little life depends upon making it into his sauna where he can escape life's chills. After Saunavihta and Saunavihta Yetis, Olle Lundahl and Niklas Strom (TalonFC) have created Saunavihta Vortex, another physics puzzle game where your goal is to click away the white shapes and send your little fella tumbling into a nice, warm furnace...er,um...sauna.

The puzzles in Saunavihta Vortex appear deceptively tricky, but in fact, they are a little easier than the first two games, with a couple of exceptions which will have you replaying levels just to get the timing right. But here you will find no yetis, or combi vans with plough-fronts; in this version there are vortexes. These vortexes act like wormholes, pinging your little fella around the screen each time you enter one.

Use your mouse to remove white shapes and send your little fella on his way. At the start of each level, you catch a brief glimpse of the whole screen, but it's short-lived and you soon realise that it's far better to send your character plummeting into the cold rather than leaving him stranded on a platform. Retrying a level, after falling into the cold, gives you another glimpse of the whole screen, where simply restarting takes you straight back to the start point...just a wee bit frustrating. This is where a scroll mechanism, to check out the whole screen would be really handy.

The graphics, music and concept are pretty much akin to the previous Saunavihta's. However this one is edgier and a little more creepy. If you've played any other version, you can pretty much expect more of the same, but the introduction of vortexes certainly presents a challenge. And Olle and Niklas have created a distinctly unusual puzzle game that will warm you to the core with its smokey, crackling fire effects, mostly easy puzzles and the satisfaction of seeing your little guy reach his smokey sauna.

The link doesn't work. The url it takes you to is faulty.

Sorta fun but ultimately annoying and frustrating since I can't see the whole puzzle, so it ends up being mostly a guessing game until I get it right.

That is, the big, green button. The url in the main article is still good. Thankfully. :)

The game was simple and frustrating for the same reason, the large screen that you couldn't scroll. It made it difficult to guess the objective, but easy since a lot of puzzles could only be solved one way and it was chronological based on what was within your field of view.

But way too simple, the only level that required any real effort was 20.

For folks wondering what the voice is whispering when you hit the vortex, it's Finnish for 3-2-1 (kolme, kaksi, yksi; phonetically kolmeh, cox-see, ook-si)