The Scale of the Universe 2 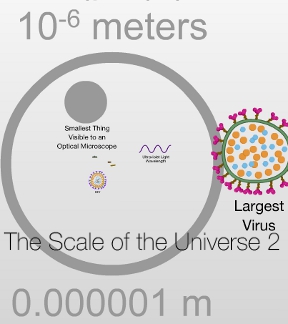 In The Hitchhiker's Guide to the Galaxy, Zaphod Beeblebrox is stuck in a machine called the Total Perspective Vortex, a torture device that grants him the knowledge of how he personally relates in scale to the entire universe. It's meant to make him go insane, you see. The Scale of the Universe 2, by Cary Huang and Michael Huang, is basically that machine in Flash form; it isn't really a game but it'll still blow your mind.

Much like the original Scale of the Universe, you control this toy by using the mouse-wheel or scroll bar to scale in and out. You can also click on various objects to read their amusing text descriptions; these are new to the sequel. You start at human scale and can scroll all the way down to theoretical concepts like strings or all the way up to the potential size of the universe. That's pretty big, and you have to scroll for a long, long, long time time to get back to human scale from there. It's kind of terrifying, honestly. Try not to think about it too much.

It won't last more than about twenty minutes, even if you count reading all of the object descriptions, but The Scale of the Universe 2 is still a quick way to instill some humility in the player. Or, if you're like Beeblebrox, reminding you that even if you're comparatively miniscule you're still the coolest thing in the known universe.

Play The Scale of the Universe 2

Cool @[email protected] I was already blown away when I got to the quantum foam, and when I was about to close it, forgot about things 'bigger' than a human and had to scroll in reverse.

cool, awesome, etc.
thanks for sharing this.

You could away from this and think "Wow, humans are tiny in comparison to the universe"

or you could walk from it and think "wow, humans are huge compared to the structure of the universe"

You could away from this and think "Wow, humans are tiny in comparison to the universe"

or you could walk from it and think "wow, humans are huge compared to the structure of the universe"

AMAZING. Music is perfect and it ran smoothly even on my 7 year old Sony Vaio.

Pretty amazing. Unfortunately I spotted some common errors in there (chop a worm in half = dead worm, not two worms) which makes me wonder what others might be in there, but despite that its a great way to show the kids the true size of things. Or in fact the size of everything!

Unfortunately, the info about meeting a human every second taking 32 years is wrong. That's how long it would take to meet 1 billion people.

Unfortunately, the info about meeting a human every second taking 32 years is wrong. That's how long it would take to meet 1 billion people.

Awe inspiring. Thank you for posting this.

This was amazing. If there are minor inaccuracies -- so what? It's still absolutely amazing. And I kind of wish they'd put the Deathstar in there, you know, for scale. That would have been cool.

Not sure what was cooler, learning the word "yottameter" or finding the point at which "lengths shorter than this have not been confirmed."

YES YES YES YES YES! I already knew before I opened the link that this would be the coolest submission for this week EVER! BTD5 walkthrough will be delayed for a really long time, sorry...

Personally, I also enjoyed the inclusion of fictional objects. It's cool to see them compared on a realistic scale.

This seems to be strongly inspired by a famous 1968 (!) short film: "Powers of Ten" by Charles and Ray Eames. You can watch this on a website that also gives you an archive of sizes in universe: http://powersof10.com/
I think this is worth to be included in Jayisgames;)

I liked the descriptions :)

I disagree that you only get about 20 minutes from this toy. My kids and I will explore this for hours and it will open up new topics for us to discuss. This is brilliant. Reminds me of the old series called "Connections."

Confuses top and bottom quarks with up and down quarks.

Up quark should be the smallest, then the down quark. Bottom should be second biggest, top should be biggest quark

knowledge about limit-less science for everyone,
really love it!
Million universal thanks for this....

Wrong. Neutrinos don't travel faster than the speed of light. It was just measurement error.

@Nato: No errors have yet been discovered to explain the faster than light Neutrino measurement. Most people believe that there is likely to be a measurement error but so far this hasn't been identified. Hopefully by the end of the year there will be separate measurements by Fermilab and/or T2K by the end of the year which will confirm or more likely fail to see the same effect. It will be interesting to see.

Note to the author:
If this was an android (or iphone) app, we would so buy it....hint hint

It would be a lot cooler if they didn't get the definition of "theory" wrong.

I agree with the above comments - a few minor scientific or mathematical inaccuracies (time given for 1 billion people, not 7 billion, incorrect use of 'theory'), but otherwise, it's a pretty well-made webtoy/experiment/thing that does perfectly at what it aims to do. I loved the first one, and this one is even better. :D

Two more errata I want to point out. First, the Eiffel Tower is presented to the right, not left, of the Washington Monument.

Second, the Cave Nebula is difficult to click because the rectangle for the Tarantula Nebula obscures it. It's somewhat easier if you click the nearby Eagle Nebula, then carefully click the last letter in "Cave Nebula." But here's what it says:

It is awesome, but the most amazing thing is that it was created by two teenagers! What great things will they accomplish as they get older??

Last time I went from smallest to biggest. now I will go from biggest to smallest. Wish me luck!

thanks for showing me some great pictures of small and really big things! great to see the differences in size! :) ps i didnt know there was so many variance in sizes of things!

1,109 Views
0 Comments
chrpa— Jayisgames needs your help to continue providing quality content. Click for details Welcome to Weekday Puzzle! We start with bitmagine Studio's platformer. Your goal is to help a blob whose partner got imprisoned in a cage. There is a...  ...

2,066 Views
5 Comments
chrpa— Jayisgames needs your help to continue providing quality content. Click for details Hi, it's Wednesday again and new Weekday Escape here! With Selfdefiant you get to Delaware and Florida for a short visit. The name of Amajeto's game clearly...  ...

The 8 Best CS:GO Matches of All Time

3,176 Views
3 Comments
chrpa— Jayisgames needs your help to continue providing quality content. Click for details Welcome to Mobile Monday! One of the best designers of escape games, Jammsworks (Jammsworks Inc.), is back with a new and enjoyable story from Venice. Follows a...  ...