[Note: This game is available in Pay What You Want format, including free. If you enjoy the game, show your support for the developer who made it by paying what you think is fair!]

In Woodsy Studios' indie visual novel adventure Serafina's Saga, also free for Android, the titular heroine has spent her entire life in the jungle until the day she leaves to rescue her kidnapped surrogate father. She's been raised to believe that all humans are dangerous and untrustworthy, but faced with the possibility that her father might not be who she thought he was, and might not even be human, as she finds herself lost in a world very unlike the one she grew up in, Serafina's got no choice but to reluctantly trust those around her for help and guidance. Especially since, surprise surprise, it turns out her heritage is a lot more complicated than she ever imagined. With ten different endings, customiseable character appearances, and multiple options for romance, including one female/female choice, Serafina's Saga is one seriously impressive work of interactive fiction... especially considering the art, music, coding, and writing was all done by one person, and there's a sequel due out later this year! 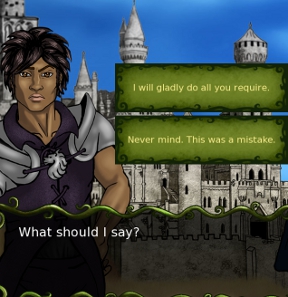 To play, all you need to do is click to advance text, and choose whichever option you prefer whenever the game gives you choices. Right-clicking opens the save/load menu, and you can use the mouse scroll wheel to go back through some of the previous text if you need to. Serafina has several options for romance if you prefer, so you'll want to take how close you'd like to see her get with certain characters into consideration before you make any rash dialogue choices. Some characters may like a little coy flirtation, while others value honesty above all else, and though the game doesn't display it, every choice with them raises or lowers their affection, and you'll need it to be as high as you can get it in order to get the best ending. If you like, you can click the clothing icon in the upper-right corner of the screen to change some aspects of the main cast's appearance, though it won't apply to all the artwork you'll see for those characters. 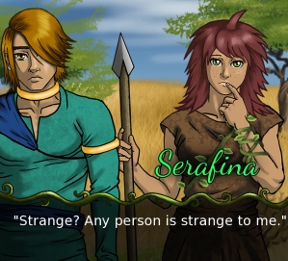 Serafina herself is a little inconsistent as a character, at one point a fierce huntress who sneaks into enemy territory in an unfamiliar land to rescue her father while wielding her spear and shouting how all humans are liars, and at the next a blushing mess because Nikolaos, who she's known for less than a day and has no real reason to trust, is flexing at her and she thinks he's "pretty cute". It's not that you can't (or shouldn't!) have a female character who exists on a spectrum of complexity beyond stereotypes, it's that Serafina seems to swing from one extreme to the other a little too quickly at times, especially for someone who's undergone such a traumatic upheaval in her life. Part of the problem is that your options for her responses are always so polarizing, so that she's either sweet and obliging or rude and blunt to a fault. (Though admittedly considering the fact that Nikolaos views telling Serafina he could have taken advantage of her while she slept both evidence of how wonderful he is and flirting, and how relentlessly sexual his advances tend to be even if you turn him down, and the way he gets sulky about it, maybe bluntness is called for.) Despite that, Serafina is still a likable and sympathetic heroine... while she's willing to accept help and admit when she's out of her depth, she also doesn't spend her time around dawdling or waiting for other people to take action. 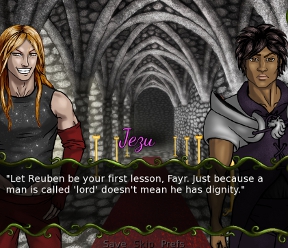 The story in Serafina's Saga is well told, with only a few minor typos, and has a satisfying amount of complexity beyond fluttering your eyelashes at people, though you're still bound to find someone you like. (Jezu's frank respect and admiration for Serafina as a person and a fighter is a welcome respite from Nikolaos' comparatively more shallow advances.) The story weaves political intrigue and magical adventure together well, and while several plot twists are broadcast from a mile away, watching them unfold is still a ton of fun. Characters reveal unexpected depth and complexity alongside real, relatable flaws and motivations, and Serafina's history (and future) unfolds alongside a story about duty, need, and responsibility. The work that's gone into making Serafina's Saga is seriously remarkable considering the one-woman studio behind it, and if you want more, make sure you check out not only the official website which has a 20 minute animated prequel to watch for the game as well as a free prequel novella, but also her other work if you want to support her. If you're craving a visual novel with intrigue, action, and romance, Serafina's Saga is easy to recommend.

Windows:
Get the full version (Pay What You Want)

Mac OS X:
Get the full version (Pay What You Want)

Mac OS X:
Get the full version (Pay What You Want)