With hidden object games dominating the casual gameplay market, what can developers do to keep them fresh? They can try fusing hidden object goodness with other genres and see what happens. Alawar Games has come through and created an odd, unique, and fun hidden object/casual simulation hybrid, Settlement: Colossus. 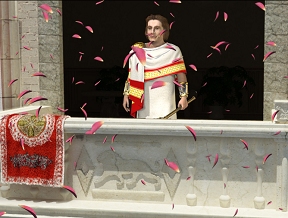 Our story begins with a group of wandering folks, led by their emperor, valiantly searching for a place to settle. Eventually they find the perfect location. It has everything; a plain surrounded by a natural harbor, forests, and mountains. Now that they've found a place to settle down they need food, since they're all a bit peckish after that marathon trek. Oh, and they need firewood, too, to keep warm. And some sort of building material for shelter. And while you're at it...

Like many a casual sim, once the story starts resources need to be gathered, technologies researched, and a village built. Unlike casual sims, though, you are not assigning your little characters to gather those necessities. Instead, you personally will be bringing home the bacon, so to speak, with a series of hidden object scenes in which you can gather the needed food, firewood, or other items. As you do so, your people will politely let you know when other things are needed, like better houses, a farm to produce more food, mines for ores, a blacksmith shop, etc. all the way up to a pagan temple to worship the gods. Along the way as you supply the goods and build the new technologies, you will also face a series of mini-games that allow for better access to new supplies. 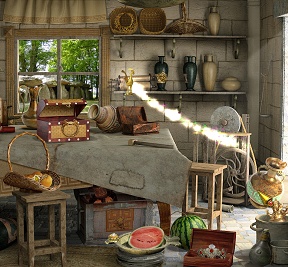 Gameplay is easy to pick up. To begin, areas that have resources will have little bubbles showing what resources are available in that location. Simply click and you are in a hidden object scene. Gathering resources is simple at first, but becomes more complex as more resources are available in an area. Your ability to gather is limited by what you can carry, so it takes some strategy to decide which resources you need more of (food, wood, clay, etc.) and which can wait until later. Adding complications is that every time you enter an area you will see not the same hidden object scene but a whole series of different locations within that area, as well as resources that hide in different places every time. As you add manufacturing buildings to the town you can go to them as well to gather manufactured goods, but each time you do it uses raw resources that you will have to replenish, which in the end means lots of hidden object finding. In the end you will be building a thriving civilization, as well as one of the seven wonders of the ancient world.

The mini-games come in different varieties: puzzles, hidden object type scenes, and even adventure style scenes where you might have to not only find various components but determine how to combine them to accomplish the tasks. The puzzles are all familiar, pipe puzzles, jigsaw types, etc., but are beautifully presented and oftimes quite difficult. Fortunately they can be skipped if you so choose. There is a nice refillable hint timer available for the adventure type scenes and the hidden object scenes, but it is non-directional. It can point out an object, but not a specific type of object, rather one chosen at random.

The story is broken up into chapters, each introduced with a cut scene explaining the story of these wandering people and their mysterious, 300 year old emperor. Each chapter has a main goal, certain primary objectives necessary to achieve that goal, and several secondary objectives that help you along the way. Resources are displayed across the top of the screen, and there's a handy tasks menu to keep track of what has been done and what needs to be done. The locations on your main village map will also let you know if they are out of resources so that you can gather more. As you complete each chapter your little village grows until it eventually becomes a mighty city. 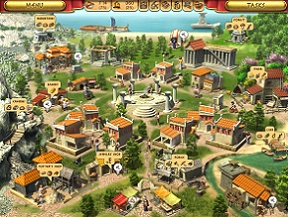 Analysis: With Settlement: Colossus, Alawar has created something unique with its fusion of hidden object gaming and casual sim-style gameplay. The hidden object scenes create a more immediate, immersive experience, rather than the usual method of setting tasks and sitting back to see what happens. With the constant need to gather raw materials and goods, along with the mini-games, that means a lot of engrossing gameplay.

The standouts here are the lovely artwork. The main village map shows not only your settlement but the faithful population as well. The hidden objects scenes are vibrant and photo real and incorporate lovely little touches that make them come to life, like buzzing insects, hopping frogs, rain, etc. Lively music and realistic sound effects add to the experience. The cut-scenes fill in the (somewhat familiar) story of the people, accompanied by a competent voice-over by the mysterious Emperor.

The downside, if you consider it one, is the repetition of the hidden object scenes. Entering the farm to gather food, for instance, can mean using up your garden tools, necessitating a return to the forge to gather more tools, which means a trip to the mountains to mine more ore, then a trip to the forest for more firewood, all of which use up food resources, which means another trip to the farm...basically, there's ample hidden object finding necessary to complete the game. Even though each location has several different scenes that rotate, you will end up familiar with each one during the multiple trips necessary to accomplish every task. Although the mini-games help break things up, towards the end of the game the hidden object hunting can get repetitious.

Settlement: Colossus is still a lot of entertaining casual gameplay crammed into an attractive package. Due to the nature of the frequent visits to the hidden object scenes, it is a game that is most fun played in small bursts of time, rather than in one marathon sitting. Bucking the trend of ever shorter hidden object games, Settlement: Colossus is something that will keep you occupied for hours and hours as you work towards your final goal. Gorgeous to look at and fun to play, this unique hybrid is a winner. Now go build a civilization!

Primary Task - Care for the People

Secondary Task - Bridge to the Caverns

Secondary Task - Lighting in the Mines

Special thanks to Eileen for this fabulous walkthrough!

Pretty lousy few days at JiG. As I write this, here are the posts on the front page:

Obviously I love the site enough to do a crude analysis of its recent posts, so this is intended as constructive criticism. I am amazed by the treasures you find, and the offbeat but intelligent way you write about games.

But this feels lately like an unenjoyable place to be, and I don't think I'm alone in feeling that these are not particularly uncommon streaks of boredom in the past year or so. I would like to say that you're no more responsible for a poor crop of games than a movie reviewer is for summer schlock, but I think we all know that's not an apt metaphor.

We, too, have been underwhelmed by some of the content released in the last week or so, and yet there were several stand out releases. A couple weeks before that, was an amazing week for new releases.

As long as I have been maintaining this site, since 2003, there have always been periods of feast and famine. It comes with the territory and should be expected.

We will continue to work long hours, as we always do, to bring you the best of what we find from the corners of the globe, be certain of that.

For weeks like this, our archives offer thousands of excellent games to enjoy, for I am sure that on one person has played them all. Instead of complaining there is nothing on the front page you enjoy, try looking through the tags listings or the Best Games list for something worthy of your time and attention. There's a treasure trove of fantastic games we've covered over the years.

And if it's browser games you prefer and you're visiting us on a weekend, that listing will omit all the download games that we keep to the weekends only. It can also be sorted by rating to help find all the best browser games we've featured over the years.

Primary Task - Care for the People

Secondary Task - Bridge to the Caverns

Secondary Task - Lighting in the Mines

Special thanks to Eileen for this fabulous walkthrough!