Please note this game deals with a subject matter some may find upsetting.

What do you get when you have a secluded cabin, a rapidly setting sun, and a car that is out of gas? Add a dash of no cell reception, and the mysterious origin of the cabin, and you probably have a set up to a cliche horror movie. But Shadow and Ash a free indie game, isn't your typical story... though it may seem that way. As you go to stay in this shady cabin, you spy a barn a bit deeper into the woods. Against common sense, you decide to check it out, and in there you find a box, a map, and a note about the greatest treasure of the previous owner. Deciding that the sun is still giving off enough light, you venture off to explore deeper this eerie place. This visual novel mixed with a point-and-click adventure by Ardent has its own unique way of telling such a story with puzzles and riddles along the way to keep things interesting. Throw in some creative mazes and the strong feeling someone's watching you just behind your back, and you've got yourself a vastly different kind of scary tale. 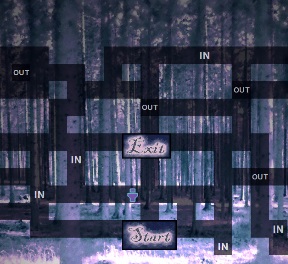 Gameplay is all done with the mouse, though there are some shortcuts on the keyboard such as [M] for mute and [ESC] to drop the game. While you click on the arrow to move on in the dialog, there are also times where a question mark will appear in the continuation area. This means you are now free to search the art of the game for a hidden "?". When you mouse over it, it will appear, and you'll be able to click to look closer. Between scenes you must travel in the woods, and this is represented by a onscreen 2D maze. You must drag your icon slowly to the "Exit" box. If the icon hits a corner, you'll lose it, and have to click it again. The first couple of times it's pretty easy, but then the twists come in. It fits the storytelling well enough that it doesn't feel as if you are taking a step back from what is going on, but getting a different feel than from what the words express.

Shadow and Ash markets itself as a horror game, but really there aren't any strong horror elements. I only say this because if you go in ready for such a game, like The Darkest Woods or The Terrible Old Man, you're going to be disappointed and miss the beauty of this game. It has its creepy atmosphere and the threat of something really terrifying about to happen is always looming, but when the game is finished you won't have any issues sleeping that night. For those who are wondering, there are no pop up scares. Keeping your music up helps you get immersed and doesn't shock you into a heart attack with sudden loud screams or anything like unto it. There is a point where it turns from a dark creepypasta story to a chilling yet lighter folky tale. So if you're in the mood for something a bit supernatural, but not wanting to test the weakness of your bladder, then Shadow and Ash is the right fit for you.

The Terrible Old Man link returns a not found page on my PC.

Whoops! Thanks for the catch. Fixed now.

The ending of this game delivers a rather high-handed ethical value judgment on a topic that may be very sensitive to some players. Just saying.

I really enjoyed playing through this. I thought the atmosphere was established almost perfectly, and the shift in tone toward the end was really good and rather uplifting. While some may have concerns about the ending, I found it to be rather non-judgmental and positive. Definitely worth a play!