According to popular myth, werewolves are pretty much all over the place, leading normal lives just like the rest of us tax-paying citizens. For the most part, they're pretty normal. Walking around, visiting Starbucks, and maybe even holding the door for you when your hands are full. But when it's the full moon, werewolf kind has a difficult time blending in. And we're not just talking about the smell! In the new hidden object adventure game from ERS Game Studio, Shadow Wolf Mysteries: Bane of the Family, you get to dive a bit deeper into the family structure of a family of werewolves, learning all about their curse and how this odd transformation travels from parents to children. 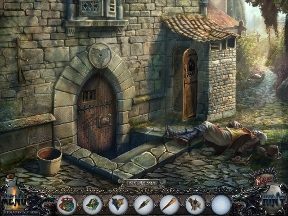 The structure of Shadow Wolf Mysteries 2 is similar to the previous game, Shadow Wolf Mysteries: Curse of the Full Moon, as well as most hidden object adventure hybrids out there. Walking around the bleak landscape (seriously, Count De la Fer, plant a flower!), you'll note a number of highly-useful items just laying around. Naturally, it's your job to gather them and keep them safe in your inventory, all the while looking for puzzles to solve using said objects. Your initial mission is to investigate outside of the manor so you can deliver a message to the Count about his daughter's "unusual" illness. Soon, you discover that illness is more like "pre-werewolfedness", Veronica is the Count's daughter, and turning into shaggy beasts of the night kind of runs in the family. So, yipes and all that jazz. What phase is the moon in tonight?

One thing Shadow Wolf Mysteries is good at is throwing puzzles in your way, and it seems like every time you take a step, a puzzle prevents you from continuing. That's a good thing, of course, as this game wouldn't be much of a game if you just walked around looking at things. Most puzzles are multi-tiered in nature, but they're logical and never too difficult to solve. Getting a light for a dark passageway, for example, might require you to find a torch, locate an oil barrel, break the barrel open with some tool, soak the torch, then light it. Mini-games are just as numerous, but hidden object scenes are far less common, giving this game a strong casual adventure sort of style. 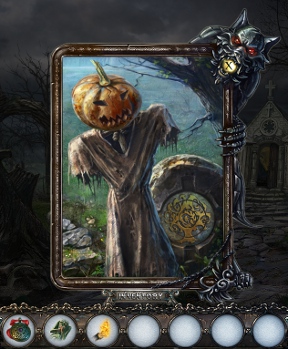 Analysis: ERS Game Studio is well-known for its hidden object hybrids, such as Redemption Cemetery, the Dark Tales series, Haunted Halls: Green Hills Sanitarium, and a good dozen or so more. In fact, if you haven't played one of the team's games, you probably haven't played many hidden object adventures at all. With that sort of universality, you know something is being done right, and Shadow Wolf Mysteries: Bane of the Family is a fine example of that.

Here's some more good news for casual adventure fans: Shadow Wolf Mysteries: Bane of the Family is a fairly long game. Including the bonus content found in the Collector's Edition, you can expect about five hours of game time, almost twice the average release these days. The initial sections offer little challenge, but after things warm up a bit, you'll stumble a few times trying to make your way around. The hint system works flawlessly, so even if you're caught, there's always a way to get a little nudge.

The only real downer with Shadow Wolf Mysteries is the fact that it follows ERS Game Studio's formula so tightly, it almost feels like a retread for fans of the team's releases. The story is unique, of course, as are the puzzles and general setting, but after more than a dozen games, it's tough to overlook the developmental skeleton there. That's not to say the game suffers in quality, it's just a lingering sense of sameness that's always behind a corner, though you never see it straight on.