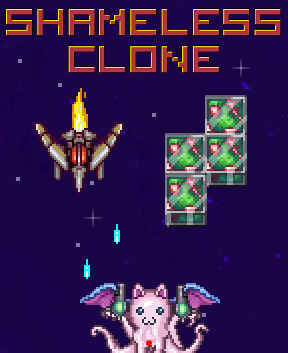 After Star Wars: Episode II and that whole Spider-man fiasco, one cannot help but be a little wary of clones. However, leave it to Roman Gecerov and Yuriy Kurenkov to show us that just because something's a little familiar doesn't mean it has to be bad. Shameless Clone doesn't rip off anything... it rips off everything! A pitch-perfect recreation of every mid-90s arcade space shooter ever, filled to the brim with skewered references and memes, Shameless Clone is a bullet hell whose authors have nothing to be ashamed of.

First, you start by choosing your method of conveyance: Space-Pirate Ship, Cat Octopus or Dancing Cactus, each with their own special attack and a hitbox a mere pixel large. Use the [mouse] to fly around screen and hold the left mouse button to fire on all manner of Sushi Cats, Tetris Blocks, Poison Mushrooms, and Spacey Invaders. Defeated enemies release coins which, when collected, charge up your hate-bar. When full, hit the [spacebar] to launch your super-attack. Collected coins can also be spent on store upgrades between levels. Other enemies may release Bonuses: some which help your progress, some which hinder, and some which turn you into the spread-shot guy from Contra. Three cute worlds of five levels apiece await fiery destruction. Good luck, and may all the force belong to you. 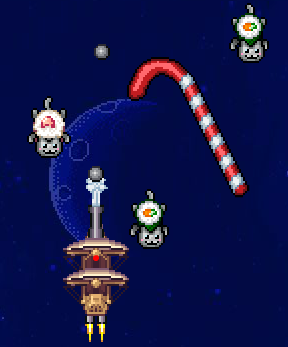 Analysis: Shameless Clone is a twisted mish-mash of elements, but somehow it all comes together and works for an enjoyable time waster. Whether lasering Longcats in Nyan World, shooting zombified pixel aliens in Invader World, or skirting the very edge of copyright infringement in Italian Plumber World, you're sure to find something to smile at, however obscure. The whole thing feels like an insane lost pirated SNES cartridge, which is probably exactly what the developer was going for. Obviously, games cannot be built on memes alone, and the game of "spot the reference" can only last for so long. Shameless Clone has a solid shoot-em-up at its base, with some cool enemy patterns and bosses to battle through. Still, the game's impish sense of humor is clearly what does most to distinguish it from the pack.

There are some negatives. In later levels there are often so many enemies, bullets, coins and bonuses on the screen that a slowdown gets a little inevitable. Also, it would have been nice to have a greater variety of "hurtful bonuses": the "flip the screen" gimmick is a clever idea at first, but an overused one that breaks the flow of the game whenever its activated. Finally, there has to have been a better way to implement the in-game advertising. Yes, it's advertising that keeps casual gaming alive, but the random 10 second commercial breaks between levels are intrusive, no doubt about it.

Shameless Clone marks Gecerov and Kurenkov as developers to watch out for. Their use of memes almost seems a little like a crutch, since its obvious they have sufficient originality and talent to need not rely on Nyan Cat to bring in players. That said, it's hard to fault the assumption that online gamers have a thing for pixelated kitties. Shameless Clone might be shameless, but it's also quite fun.

Funny you should say that, there's a little Flash SHMUP on JIG named Bullet Heaven...

I wonder if anyone didn't start with either peyote or octocat.
-X