Yu already has enough problems. Not only is she one of many citizens suffering under the rule of an oppressive emperor, but her place in the rebellion is to buy the food. Then her childhood friend Zihao is arrested and sentenced to be executed in two days. It turns out that he is the rightful heir to the throne, but the only way he can prove that is with the Jade Dragon Staff (genetic testing being such an inexact science in medieval China). So it falls upon our heroine to find this staff, restore it and help Zihao take his rightful place — before the executioner does his job. 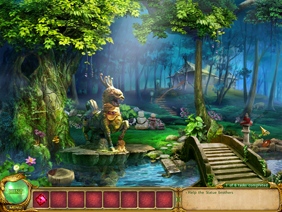 Shaolin Mystery: Tale of the Jade Dragon staff is another enticing hidden object game release. As you travel through various exotic locations, you have to find objects solve puzzles and unlock doors to new areas. The journey is pretty epic, starting in the streets of an ancient Chinese city, through a ruined town, along a spirit-filled forest and increasingly more exotic places, including a world in an entirely different realm (the flying snails were a clue...). In each of the seven chapters you encounter a variety of challenges. One type requires you to find objects scattered in the room to activate something. Every now and then you have to mix a potion, plus you encounter puzzles in fair regularity — both of the familiar type and some more unique challenges. And then there is the ever-present hidden object side, picking up a selection of random objects in a smorgasbord of junk, all towards recovering one vital tool you need to get past an obstacle in the game.

Along the way Yu meets a few interesting characters, though they only serve as one way to narrate puzzles. Like similar games you do a lot of traveling between scenes in a chapter, perhaps quite a bit more than usual, because most objects unveil themselves sequentially as you need them. To make sure things don't get too frustrating, there is the ubiquitous hint button, which never penalises you but does require a bit of time to charge after you use it.

Analysis: Shaolin Mystery doesn't push the genre envelope, so if you have played any of the recent games in this genre (Magic Encyclopedia: Illusions is incredibly similar) you know what to expect. But if you are a fan of these games, it will entertain with some great lateral puzzles and pretty gorgeous locations. The hidden object scenes do feel a bit cluttered at times and some objects look like they have been hastily placed there instead of integrated within the picture, but it's a nitpick. The stuff you need tends to be easy to spot, thanks to the crisp graphics. In fact, visually the game is very good; not much better than other top offerings on the market, but it holds its own. 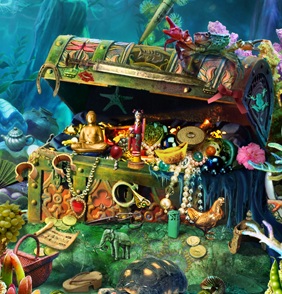 On the puzzle side it is less challenging. Some obstacles take a little bit of lateral thinking, but things are handled pretty sequentially, so you never really scratch your head. If you don't have the item you need, you'll have it pretty soon—most likely in the clutter of a reactivated hidden object screen. The mini-games are a spot harder and cover the gamut of familiar ones: following note sequences, sliding pictures, matching duplicate symbols and so forth. It also has a few new (or rarely-seen) puzzles — overall there are a lot of mini games to keep you stumped. These can also be skipped, but where is the fun in that?

One annoyance is the presentation of the story. The narrator sounds pretty unengaged and slightly bored, something that isn't helped with less than great audio (the exception being the nice soundtrack). And the finale seems a bit like a wasted opportunity - after recovering the full staff you don't rush back to save your friend. Yu does, but it's all represented as a slide show with the narrator's unenthusiastic drawl covering the events. That was a bit of an anticlimax to what is really a fun and rich puzzle/HOG game. Also, you meet one Shaolin guy and all he wants is medicine. There was certainly no mystery as far as he was concerned.

After Magic Encyclopedia this game feel adequate, but hardly remarkable. It was fun while it lasted and had all the standard boxes checked. But Shaolin Mystery lacks the shine and enthusiasm that the top games in the genre enjoy. It's still well worth the seven bucks asked for it, but don't expect it to knock your favourite puzzle/hidden object game off its perch.

Chapter 4: The Forest of Spirits

Special thanks to Jazz for this fabulous walkthrough!

Chapter 4: The Forest of Spirits

Special thanks to Jazz for this fabulous walkthrough!