How do you feel about high-school? In Shira-Oka: Second Chances, a visual novel simulation from Okashi Studio, an angel (the best angel) named Satsuko gives you a chance to relive your life. Literally! After waking up from a particularly horrible fever, you discover that you've actually flown back in time to the start of high school years before. Faced with the opportunity to remake your future as you see fit, how will you change your life? Throw yourself into your studies? Whip your body into a sports superstar? Or maybe you'll try and connect more with the people you never got the chance to know before? Make the most of it in this massive game packed with replay value.

At the beginning of the game, Satsuko walks you through character creation and introduces you to skills and traits, both of which you'll get a chance to upgrade later on from your meager beginnings by spending the points you gain from certain life events. How well you do at certain events and how people perceive you comes down to your various statistics, which covers everything from your skill at school subjects to fashion sense. Choosing to do different activities will cause some stats to rise and others to fall, and how big of an increase you get depends on how well you do. 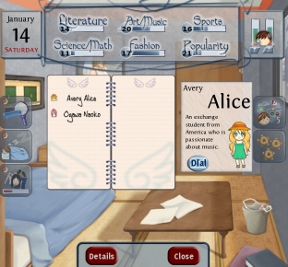 Of course, you can't spend all your time in your bedroom waiting for life to come to you. Eventually, you'll gain the ability to talk to Satsuko by clicking on her angel wing icon and schedule time out at the different locations you've unlocked. While it's easy to forget about this, it's really the only way to interact with people more and advance their individual storylines. Satsuko will let you schedule as many days as you like in one go, so make a point of filling your calendar at the start of each month so you don't fall behind. Eventually, you'll be able to grow closer to the various characters you meet, and doing so will allow you to explore their stories and experience new subplots. There are a lot of endings in the game to uncover, some with more difficult conditions than others, so don't neglect your statistics in favour of partying.

Unlike most visual novel simulations, Shira-Oka takes place over a staggering four years rather than just a few weeks or months. In that time, you'll encounter numerous events with varied outcomes, new characters, and have the chance to succeed stunningly or fail miserably. Even if you do meet with failure, however, Satsuko isn't ready to give up on you yet and will rewind time back to the beginning of the game again if necessary. While this does mean you'll have to play and build up your skills and relationships all over again, it adds an interesting wrinkle; nobody remembers you, but you remember everything. If you do need to restart time, you may find yourself able to use your foreknowledge of the future to help yourself or other characters... or just get in a little extra study time before exams, since Satsuko places a lot of weight in how well you do in school. But you know, maybe angels who can't hold down a job themselves shouldn't throw stones, hmmmm?!... wh... no, Satsuko, I was only kidding, don't cry... aw, geez... angels, man. 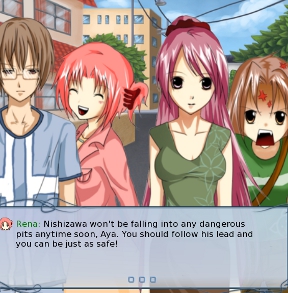 Analysis: With a massive cast, tremendous length, and some really impressive production values in the form of animation and voice acting, Shira-Oka: Second Chances is probably the most ambitious indie visual novel around. The basic concept, that of a high school romance/simulation has been done to death (though not always in ways you would expect), but Shira-Oka's presentation and time-warping plot helps it stand head and halo above most others. Admittedly, while having Satsuko rewind time all the way to the start of the game whenever you fail at a critical point can get repetitive, Shira-Oka's willingness to let you play with your foreknowledge of events in clever ways helps keep things interesting, especially combined with all the random events that can pop up. 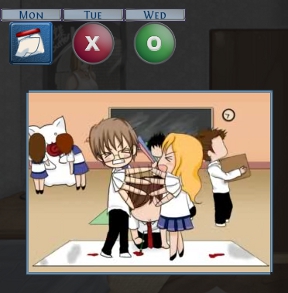 Stat management, unfortunately, winds up being more than a little annoying and even intrusive at times, to the point where it can feel like work. Juggling the constant raise and decline of each statistic with your mental and physical health is stressful enough that it makes the constant comments from the peanut gallery about your appearance come across as shallow. You'll meet a lot of characters to interact with and get to know better, however, so chances are good you'll find someone you like. I found Aya to be almost inhumanly obnoxious, for instance, and Hiroshi exceptionally creepy, but you might be a little less inclined to roll them up in a carpet and throw them off a bridge. (A little less inclined.)

But while the sheer staggering length and depth of the game may put off players looking for something a bit more straightforward, visual novel aficionados with a yen for complexity and a hefty chunk of replay value will throw their arms around it. There is a lot to see and do, and seeing the lives of other characters play out around you as you progress through the years can be both rewarding and even a little bittersweet. Suffice it to say, you can expect to encounter a lot of surprises as you play and get to know characters, and if you have the time to get into it, it can be hard to put down. Shira-Oka: Second Chances will demand a lot of your effort, but is one of the most involving and rewarding visual novels you can make a date with. Clear your schedule and give the demo a try. Shira-Oka: Second Chances is packed with drama, humour, romance, and even some fascinating cultural tidbits... we should all be so lucky to dream of standing on an eggplant Mt Fuji and turning into a hawk one day.

Couple things NOT brought up in the review:

First, you are going to have to get through every single named character's route on the same save file. Feel free to start pulling your hair out trying to figure out how to reach certain characters (although thankfully, the game won't let you go through the same character's route twice in the same file even if you meet the affection requirement for it a second time).

Secondly, YOU CAN END UP IN AN UNWINNABLE SITUATION WHERE SATSUKO'S DEMANDS ARE SIMPLY IMPOSSIBLE TO MEET. As you clear routes, Satsuko raises the grade requirement, eventually reaching the point where (if memory serves correctly) getting too many B's or below will send you back to the start.

I wish it had been mentioned in the review that while you can customize and name your character, they're always a guy. Not really something I would have minded, but it was kind of an annoying surprise.

As for the rest of the game... it looked really, really great at first, and Satsuko's sprite was animated beautifully. Then I couldn't really get past the inherent creepiness of the protagonist (who's still most likely mentally an adult) dating a bunch of high school girls. I was hoping that Satsuko herself would be a dateable character, because she seemed the most endearing and wasn't a teenager, but that doesn't appear to be the case.

None of those girls really stuck out to me as interesting either- they seemed like a bunch of anime character types that we've all seen before. That can be fun if there's something unique about the character as well, but... there just didn't seem to be any of that here. Judging by the somewhat inconsistent look of many of their sprites, the devs had a hard time caring about them, too.

I also felt like the cultural stuff was poorly presented. It seemed to stick out like a sore thumb whenever something uniquely Japanese came up, like the devs were trying to show off how Japanese the game was, or how informed they themselves are about Japan. If the characters grew up in this culture, things like school festivals or whatever wouldn't stick out to them as A Very Japanese Thing That Japanese People Do, right? It's great to educate people about different cultures, but the way it was done here just killed the immersion.