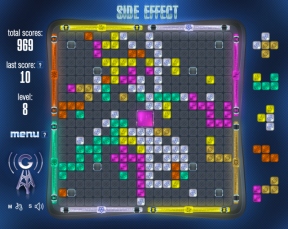 Imagine a game that is part Tetris, part Solitaire, and part Minesweeper. It combines arcade-style graphics and gameplay with forethought and straight-out Tangram-style puzzling madness. Next, imagine a world where any of that makes any amount of sense and you've got a rough idea of how the brilliant Side Effect works.

Developed by The Game Telegraph, this game about putting coloured squares onto a grid is at first hilariously simple, then deviously contrived as you become a victim of your own "that block will be OK to sit there" mentality. The idea is straightforward enough: A glowing box sits in the center of the play area and glowing barriers line the field. You score points by strategically placing blocks on the grid and ensuring they form a continuous same-coloured line to the edge of the barrier.

But making a line touch the side doesn't come without a price, hence the title of the game. Completing a line causes the colours of the walls to change, altering the usefulness of partial lines you've constructed. Sometimes you'll have to build a line from scratch, making the screen cluttered with abandoned structures after only a little time. Placed pieces become more and more important as you progress in the game, and later you'll get frugal and strategic with dropping those blocks.

Should this method of play become too cathartic, the more relaxed mode of play offers a grid with colours already populating the playing field. By carefully placing your given five pieces, you must cause a cascade which connects every colour simultaneously to their outside eges. Though utterly frustrating in its levels of crafty difficulty, the soothing music plays on, urging yet another replay. 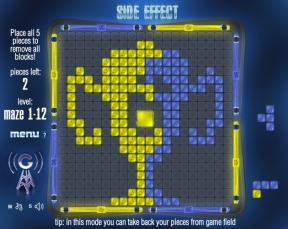 Analysis: Side Effect is a simple game, though its depth becomes apparent fairly quickly. The design of the levels and how complicated the game becomes is up to you and how randomly you decide to place pieces or how carelessly you place a piece that has just one bit of another colour. The puzzle mode is mind-bendingly difficult but ultimately satisfying, especially those levels with only enough room to comfortably house each piece.

The only drawback is the randomness of the border pieces. A planned path can come to naught if you manage to create a different one elsewhere, should the connecting edge suddenly turn into a different colour. Also, while we see pieces magically appear on the board in later levels (along with the immovable concrete blocks), there are no pieces or special moves available to clear a part of the field in order to provide more playing space. This is frustrating as the board becomes more cluttered by natural piece positioning, though, fortunately, the game does provide a custom play, where the game can become much simpler, if one should desire.

Ultimately, the game is cute, charming, very neatly presented and the simplicity with which the games graphics and layout are handled gives Side Effect an immediate draw of appeal. The hook comes when the underlying mechanics unfold and the rules, boundaries and tricks you will need in future games are slowly revealed to you. It's gorgeous to look at, easy to pick up and frustratingly difficult to put down. Just as a puzzle game should be.

So um, this is almost exactly like Mozaki Blocks. Which was designed by the same guy who made Tetris (and whose name I cannot spell).

I'm not sure "contrived" is the right word there. Just sayin'.

Ahh Mozaki, not mochi, lol mixing up games with desserts. I have not played that game in at least 7 years. Except there are a few things different. This game is harder due to the fact that it does not have small 1, 2 or 3 block pieces or wild pieces like Mozaki. Also in mozaki you got bonuses for getting large squares of the same color on the board. Also that game had a bonus round.

This one is much more relaxing in the music and lacking of a timer.

Yes, the original idea was taken from the game "Mozaki Blocks" and we describe this at the credits page.

Although the mechanics are similar, all other parts of the game is original, and I think it is good for both for these games and for players. :)

Very well designed and enjoyable to play. But for me it just seemed to be lacking something to make me want to keep going. After twenty minutes or so I got bored, despite the introduction of new blocks and 'cheats'.

I think I found a bug:

when playing in custom mode with the color changing option turned off, after the first successful path has been made all the colors turn gray and no more paths can be completed

I tested this three times each time the game stopped working.

Fun concept. "Maze" mode holds my interest much longer than regular play. I cannot get puzzle 1-11, though!

Very entertaining, if only it wasn't so ridiculously slow. Which is quite an impressive feature for a block-placing game.
Also, the clickable regions all seem to be a bit off the buttons, but that might be a side-effect of the lagging interface.