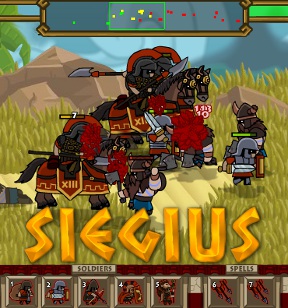 If history has taught us anything, it's that history is neat and can make great content for video games. Case in point: Siegius, a casual real-time strategy / defense game from Juice-Tin (That Gravity Game, A Knight's Quest) that takes place during Julius Caesar's conquest of Gaul way back in the mid-50s BC. Send units out to attack the base of the Gaul commander Vercingetorix. He's streaming soldiers as well, so you must balance defensive units with long-range fighters, melee combat specialists, and unique spells, clearing the battlefields as you march your way to victory! Hopefully!

Siegius takes place on a flat playing field with three corridors to place units: high, low, and middle. You can buy and place fighters on any of these areas and they'll automatically run from your barracks, swords at the ready. As soon as they encounter an enemy on the same corridor, they'll attack. Depending on the attacking and defending units' strengths and weaknesses, the victor will continue forward while the loser goes face-down in the dirt. Harsh!

Your units range from peasants who can mine for gold to close-range soldiers, healers, archers, defenders, and more. Each costs an amount of gold to summon and must recharge before you can send them again. You have to watch your opponent's moves and calculate your retaliation carefully, as sending units on the wrong section of the battlefield or failing to take into account unit type will cost you both time and gold.

Spells can also be used once unlocked, and Siegius is fairly forgiving about the frequency in which you can use them. Before each battle you are allowed to outfit your inventory with soldiers and spells, so pick the ones that you like best (or that, you know, work well together), and head out to battle.

Siegius doesn't do anything fantastically new or inventive, but the presentation is spot-on, and the game itself quite gripping. Each level is filled with epic drama flavored with a touch of internet-style humor. The strategy and action mix is excellent and very well-suited for casual players who aren't looking for an extra-challenging game to vex them for hours.

It takes some time to unlock all of the warriors and spells, but each level gives you something new, so there's no shortage of motivation to keep plugging away, stage after stage. Settle in and get ready to conquer some Gauls. Again!

Is anyone else having an issue with the game not showing up at all? Is the game perhaps hosted on a site other than jayisgames.com that I need to allow to run scripts?

[What browser, OS and Flash Player versions are you using? The game appears to be loading fine. It's hosted on games.jayisgames.com. -Jay]

Not showing up for me either. Vista HB, Firefox 3.6, updated Flash Player four days ago.

If that doesn't work, upgrade Vista to Windows 7, you'll be glad you did. Vista is an aberration.

I don't see it either, using Linux and Firefox. Maybe you need to clear your cache to see the problem.

[I've emptied my caches and still the game is loading in every browser I try on both Mac OS X and Windows 7. I just can't reproduce the issue you're seeing. -Jay]

The end is a bit of a let down and it is a lot easy. Grab gold, spam troops, rinse and repeat.

The game is also not loading for me. Windows 7; on Chrome and Internet Explorer I just see a blank white rectangle where the game should be. In Firefox, there's not even a white rectangle.

[Try reloading the page to see if it loads now. I changed the server where it's hosted on. -Jay]

What's the deal with the game not saving progress??? On the load screen the save game shows I'm on level 10, but when I load that game it goes back to stage 1. Upsetting.

@BobL: That may be a result of me changing the server the game was hosted on due to complaints the game wasn't loading. If that's the case, I apologize for you losing your saved game because of it.

Actually, I think I figured it out. My game was saved, it's just that when you load it puts you back on stage one but you can select whatever stage you left off at once you're re-loaded.

On another note, any one have an idea how t oget past stage 10? The ice battle with littel resources, the one where Rome starts sending you reinforcements every 60 seconds? I am getting killed by their constant onslaught.

Bob, that happened to me too, what you have to do is march the guy on the map all the way to level 10...ie walk to lv 2 then 3 then 4, but you won't have to fight the battles

Have to weather their early waves until all your reinforcements come in! Once they reach your base in large numbers, try making lots of archers/flame archers to push them back.

my game is also not coming up. i kept trying until another website appeared.(the website was not another max game) then i waited for a while and the game just popped up.

[Sorry, but I really have no idea what you're saying here. There should be no more issues with save games for this game if you've played it recently. -Jay]

977 Views
0 Comments
chrpa— Jayisgames needs your help to continue providing quality content. Click for details Welcome to Mobile Monday! Bart Bonte's games are always fun - this time we've got a physics game which mechanism is simple and many players may remeber...  ...

3,397 Views
0 Comments
chrpa— Jayisgames needs your help to continue providing quality content. Click for details Welcome to the Roundup 33 with three games! As mentioned in the previous roundups, only odd-numbered episodes are featured since even-numbered are for Robin Vencel's patrons. More...  ...

1,874 Views
0 Comments
chrpa— Jayisgames needs your help to continue providing quality content. Click for details Welcome to Weekday Puzzle! For a start, we have NoaDev's arcade game controlled by one finger only,. Then come two games where collaboration is the key -...  ...