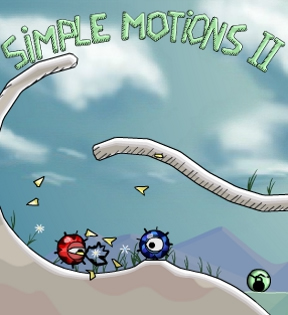 You wouldn't think physics puzzles could be described as "funky" or "grooveadelic", but Atom-Soft's Simple Motions 2, the sequel to the oh-so-mellow original, definitely qualifies. Drag and place badges with different effects onscreen so that when you press start and your roly-poly critter falls into play, they'll follow along a path that (hopefully) leads them on a path to the red flag, snaring all the stars along the way. This time, however, you've also got to contend with other rolling creatures that need to be dealt with according to each stage's directions. If you don't succeed the first time, you can simply drag your badges around and try again, though getting the best score depends on completing the level in as few attempts as possible.

Pressure? Hardly. Like its humble predecessor, Simple Motions 2 combines simple visuals and a groovy soundtrack to make its gameplay feel thoughtful and relaxing in a way that suits it perfectly for coffee breaks, lunchtime, or really just, y'know, whenever. It succeeds as a sequel largely by keeping the original gameplay intact while adding in a handful of new elements that keep it from feeling like a complete retread, though you may need to experiment with these a few times to really grok how they should be played the first time 'round, since their descriptions aren't always that descriptive. But as a means to enjoy some simple and simply engaging physics puzzling trussed up in a pretty little package whenever you need a break? Simple Motions 2 is the perfect choice.

difficult but clever & all around very beautiful. better than its earlier iteration, it does require a lot of commitment, not to mention more than a smidgen amount of time. well worth it, i think, & a good challenge to one's expectations.