Take Tetris, draw little faces on all the blocks, make it about destruction instead of construction (in other words, add bombs) and you have Sirtet, an uncomplicated, relaxed puzzler. To get started, all you have to know is that red blocks are evil and should be destroyed, and their only weakness are blue blocks. In each level, the red rascals pile up quite conveniently, so you can neatly put the right blue Tetris shapes over them and they'll all disappear. Sweet victory! To move blue shapes, use your mouse. To turn them, either right click or press the left and right [arrow] keys. You can't flip the shapes, though, so you're stuck with the ones you have, which makes things a little more challenging. 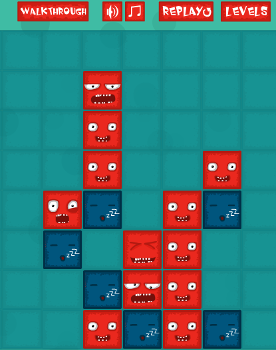 Red blocks vanish when you put shapes on top of them, and you have to clear the level before you can move on. There are also the sleeping blocks, which can only be destroyed by bombs, but you don't have to clear them to finish a level. You must work around them, though, as you never have enough bombs to blow them all up, which can sometimes give you a bit of a headache. The number of blocks rises as the levels progress, which increases the amount of possible combinations and makes the solution a little harder to see. But the game never really becomes difficult – it's usually just a matter of trying out a few combinations and figuring out what works. Sure, an undo button could be useful, but the levels aren't very big, so restarting usually means rewinding just a few moves. Sirtet hits the right balance of simplicity and puzzliness, and even though it doesn't have the revolutionary potential of its role-model, Tetris, it'll entertain you and maybe make you a bit nostalgic.