Alright, I can admit it. There are times, usually when my husband isn't home I'm watching Impractical Jokers and the remote is a few inches out of reach, I wish I was an alien blob of glue with retractable slime appendages. A Slime Hook, if you will. Darren Briden has made my laziest dreams come true with this cute puzzle game about a cyclopean ball of green extraterrestrial goop who is able to shoot out appendages that stick to any green surface and pull it along. Just click to make our boneless hero shoot a hook out to where your cursor is. The goal in each stage is to make it to the exit in as few moves as possible, but you'll also have to contend with guards blocking your path. If you cross in front of them they'll see you, but if you slide through them from the sides or from behind, uh... well... let's just say our innocent looking little friend has more in common with the blood-and-guts approach of The Visitor than, say, ET. Naturally, you also don't want any of the guards to be able to spot the bodies of their, eh, incapacitated coworkers, since that sort of thing tends to upset people. 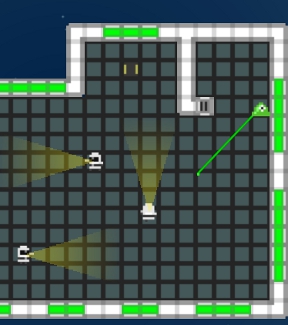 Slime Hook is one of those simple little puzzle games whose simplicity winds up working in its favor. It doesn't need a lot of flash, though its retro visuals sure do make murder adorable, because it's relying on its casual yet clever gameplay to be, well, the hook, so to speak. As levels progress, things get more challenging, with guards going on patrol and changing direction, which makes planning the way the bodies of any you've taken out will fly important so nobody raises the alarm. Admittedly, the lack of real substantial variety in the stages makes a lot of them look and feel the same, but the satisfying challenge that comes with completing a level in less moves than needed for gold, or taking out more than one guard with a perfectly timed sling, gives Slime Hook that extra cerebral oopmh it needs. Assuming you don't mind the tiny pixel explosions of blood (just pretend it's jam), Slime Hook is a perfectly pleasant and engaging little puzzle game I'd love to see a more complex sequel to.

Another game ruined (for some of us) by the simple failure to include separate controls for music and FX.

I'm with you, partially.

It didn't ruin the game for me, but there is a commonly annoying trend in games recently to not let you mute the music or SFX seperately, and lots of the time I like playing with the SFX on and my music in the background, not the repetitive annoying tracks usually seen in games.

Developers should be looking towards more options not less.
It's not a big deal for me just muting it, but if I wanted to have a full game mute, I want to be able to do it by muting individual things myself.

Super annoying as many times you COULD escape if you didn't HAVE to kill everyone which is kinda complete BS.