Vera wanted nothing to do with Pilgrim's Hook, the gloomy seaside town she grew up in, but her twin brother Arthur was always drawn back... and now a frantic phone call from him has brought her back to a place she always swore she was done with for good. Why? Well, the unspeakable evil lurking beneath the waters for starters. You know. The usual tourist-y trap stuff. Gunnar Games delivers a cheesy but enjoyable hidden-object adventure with Small Town Terrors: Pilgrim's Hook. When Vera arrives at the island to find it a bit more hilariously overrun with dark forces than she remembers, it's a race against time to find Arthur and get out before a crab the size of a small pick-up truck carries him off, or he gets throttled by all of these sinister inky black tentacles, or he falls into one of these mysterious sinkholes opening up everywhere or... something. Man. And I thought my hometown was a dump. 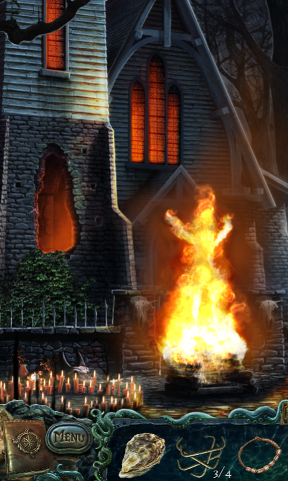 As it turns out, Vera has bigger problems than her brother being a flake and whatever bad memories Pilgrim's Hook is giving her. It seems like there's something bigger and darker going on here, and a war between the land and sea is brewing with some truly ancient forces behind it. Vera may have set out looking to save her brother, but she'll quickly discover there's a lot more at stake than that, and something very old and very sinister has had its eye on her from the day she was born to use her as a pawn to tip the tides of war.

Click around to gather clues, solve puzzles and hidden-object scenes. You know you've found an item when you get a very Inception-y BWWUUUUNNN sound-effect. Every time. You'll also get a trusty map that will display locations you can currently do something in, and even let you hop around to places you've visited at a click. Additionally, the game has an extremely helpful hint system that will lead you right to your next objective without repeatedly clicking, and a whole score of optional achievements and bonus morphing objects to track down. 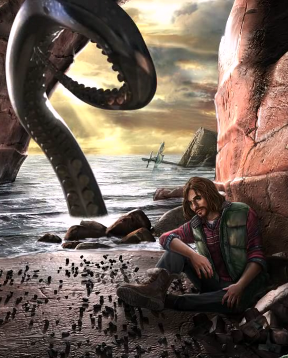 Analysis: I admit, I spent the first half hour or so good-naturedly ridiculing Pilgrim's Hook. When Vera complained about bad memories from her childhood, I wasn't expecting to be greeted with massive crabs and sinister sentient kraken, and it seemed so over-the-top as to be laughable. And yet, the more I played, the more engrossed I became. Pilgrim's Hook has a surprisingly good story at its core beyond the whole "rescue your brother" bit, and its some captivatingly unique mythology that winds folklore and magic with just the right amount of creepiness. It's still cheesy, but it feels unique and story-oriented in a way that few casual downloads really try this whole-heartedly to be. It doesn't hurt that the game is gorgeous, too, with stunning design, vibrant colours, and an atmospheric soundtrack. Just get used to BWWUUUUNNN, because you're going to be hearing it a lot. BWWUUUUNNN. BWWUUUUNNN. BWWUUUUNNN

On the other hand, the gameplay holds few surprises, and often feels like the hidden-object scenes are almost lazily tacked on. It's one thing to be rooting through a pile of junk to find a useful item. Quite another to hunt down nine of each type of random sea creature before the game will let you pick up the saw you knew you needed that was sitting in plain view the entire time. Some of the adventure-game logic will be annoying too, forcing you to, say, find a sharp item to cut through a single thing, then toss it aside, only to need yet another random sharp object a few minutes later, over and over. Fortunately, the puzzles require a bit more brainpower than usual, even if they're familiar designs, and the plot constantly sitting at the forefront of the experience will keep you intrigued even when the gameplay drags a bit in comparison. It's also on the long side, and most players will probably spend over five hours on the main campaign alone. The bonus chapter in the Collector's Edition is significantly shorter, but at least actually feels like a bonus instead of an integral chunk of the story that Standard Edition buyers would otherwise miss out on. Try the demo and give it a chance to get its hooks into you, and you may just find it a creative and captivating hidden-object adventure of a gem that deserves to be experienced.