Ah, l'amour et les escargots... Nothing more romantic than a slimy mollusc falling in love. Snail Bob has found his soul mate, who happens to be a very successful singer, and she's performing clear across the forest full of dangers and puzzles. But dear old Bob would do anything for love, and with a little help from his friends, he'll soon be walking on sunshine. I could do the entire review in song titles. Anyway, in Snail Bob 5: Love Story, Hunter Hamster's new point-and-click puzzler, you get to play Cupid's little helper and make sure Bob reaches his love by manipulating all sorts of buttons, platforms and other contraptions and finishing all twenty-five fun-packed levels. Bob moves on his own until you stop him, either by clicking on him or pressing the [spacebar], and you can control his speed and direction by clicking the two buttons in the upper right corner. 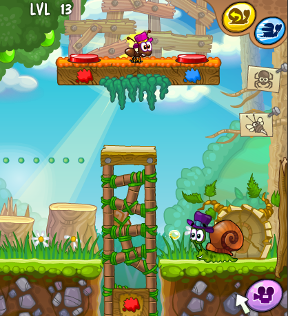 Snail Bob 5: Love Story is certainly the most polished episode in the series so far. Everything is just on the right side of adorable, the mechanics work like a charm, and there are enough new elements to make this instalment clearly stand out from the ones before. The sweetest of these is the little ant in a top hat, who is polite enough to help Bob out by standing on some buttons. Every level still has three stars you can find, and this time round they seem even more fiendishly hidden than before. Uncovering them is a challenge in its own right, especially because they unlock mini-games, an all-new, all-cute side feature. With the amount of things to do in every stage, it was a good decision to keep everything on the same screen. This way you have the time to stop Bob at the beginning of the level, quickly survey all the options, plan your strategy and execute it. Or, if you're feeling extra brave, try to solve puzzles as Bob slides along. In any case, do give this game a try, because the Snail Bob series deserves it. It has managed to stay fresh, original and funny in that silly, snail way, and is sure to delight its fans all over again.

Can anyone tell me where the 3rd star on level 24 is please?

It's the only star I am missing in the whole game, help me out?

The third star on level 24 is

hidden on the grass on the bottom left.

The 3rd star on Level 23 is in the grass between the 2 mushrooms on the cliff below the ticket.

Cute. I'm still trying to figure out why, when Bob freezes, he looks around surreptitiously, and then smoke starts coming out of his "chimney." Is he perhaps a member of the Choom Gang?