I don't think anyone who had access to a computer or a mobile phone hasn't played some version of snake, like Rattle Racer or Nibbler or even Snakes on a Cartesian Plane. Every spin off has been greater than the last and we always are left wanting more. But Snake Rewind is not just another copy. How so? Well, all credit to the game goes to Rumilus Design and Taneli Armanto. Yes, that's the Taneli Armanto, the original creator of Snake for the Nokia phones. He has once again graced us with a free snake game for the iOS and Android. It keeps to its old roots with simple, but beautiful, graphic, and the simple idea for the gameplay; eat "fruit", get bigger and faster, avoid your growing bod and repeat until you either fill the screen with your snake or die trying. But with upgrades, items to nab to help you on your way, and achievements to gain unlocking new level designs things are fresh enough for you to be sucked right in again. 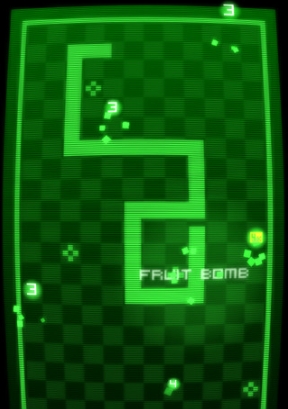 Snake Rewind is a tall glass of nostalgia with a dash of lemon to keep things zesty. The fruit you eat counts as cash for the store where you can get upgrades for the power ups you nab in game, like a fruit bomb that will collect everything on screen, or a mystery box that gives you some sort of reward the next time you play. While you can optionally pay out of pocket for these via in-app purchases, if you keep an eye out for the multipliers that show as orange dots, you can easily rack up your score and fruit count. The fruit does more than just buy upgrades, it can also pay for your rewinds, which backs up your snake after hitting a wall, or itself. But the price increases rapidly, so be careful not to fall into its trickery of an easy redo. Speaking of tricky, moving your snake can be a little finicky. You do so by taping on the screen on the direction you want it to go in relation to where it's at. If the snake is above your finger on the left and you tap, the snake will turn right and if you tap again, it'll move down. It sounds a bit confusing, but you'll get a finger on it in no time once you start playing, because, really, who can pass this up? Seriously, playing this game is like finding your old tree house, only someone has given it a fresh coat of paint and placed bells and whistles in all the right spots. So climb on up and let all the childhood memories come back to ya.

So, I guess this would be an official sequel to Snake, then? Huh.

Well...no, not really, since the cell phone port was not the first version of Snake.