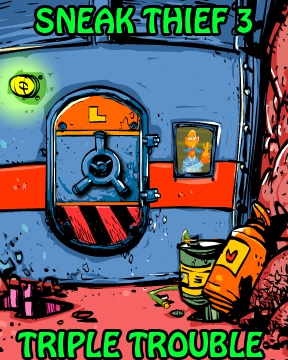 For point-and-click fans, if there's anything they love as much as getting out of a place, it's getting into something they shouldn't be. Hence the success of Pastel Games' Sneak Thief series. In the third entry, Sneak Thief 3: Triple Trouble, the titular thief finds himself in some kind of underground lair with a number of code pads and a safe. Thieves are a lot like adventure gamers, I guess; they just can't resist these things. Will it turn out to be his downfall?

The mechanics are similar to other games of the same genre: point at stuff, click it to manipulate it in some way or pick it up, pick up things in your inventory and click to combine them with other inventory items or the scenery, point, click, point, point, click, click. As a part of a puzzle, you'll have to have keen eyes and note down a number series, but there's no math to be done or such. In fact, one particular puzzle takes advantage of the veteran player's assumption as to how a particular object is generally used. To say more would spoil it.

The game features the same busily off-kilter Kamil Kochanski art and animation that Pastel Games fans have come to know and love, which particularly shines in the ending. A brisk fifteen minute-ish diversion, this game will send you off into the weekend whistling. I just want to see if and how Sneak Thief 4 handles that ending!

Good game, would like it if there were a indication that we leave the screen. Anyway it was fun, wonder what happens next.

Interesting how our thieving protagonist always recklessly constructs and tries out every invention he discovers, whether it'll help him or not.

Ah, that's more like it. I had so many issues with the last installment, and it's really nice to see that none of those issues are present in this third game.

And the ending was... unexpected. I'm looking forward to Sneak Thief 4!

In the same boat as pesky. Worked on getting everything on my own just fine for a good 2 hours...then finally caved and checked the walkthrough. After reading that first bit, I had it.

I also love the goofy inventions and art scheme here as was present in the House Escape series. I guess my only problem with Pastel Games is that it seems like they have 10+ series they are working on, but never resolve. I want the next installment of Fog. :(

@Tomas: How do you not see it? It's not only in plain sight, it's in the screenshot!

Regarding step 1 of the walkthrough,

you have to watch the video. The code appears after a few seconds.

I don't see step 1 either. Not even after watching and clicking on the video for several seconds. Other than that, I got everything. Felt stupid to build the whole (spoiler) and be told I needed the (spoiler).