Very few people think creating a soap opera is a complex and time consuming process, but PlayFirst's new time management game, Soap Opera Dash, simplifies the formula even further. Assemble your actors, do their hair and makeup, make sure their wardrobes are set, and shoot each episode one scene at a time. It's a bit different than other games in the Dash series, but it's every bit as well-made and engaging! 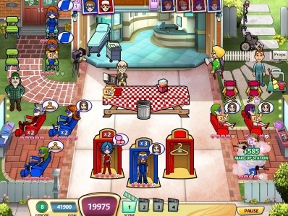 Step one in making a soap opera: choose parts for the actors. From the available roster, you'll select the jealous best friend, the supportive pal, set who the quarreling lovers are, etc. Once the roles are cast, the real work begins. Actors appear on the left side of the screen and take a seat. Each wants a script of a certain color, and it's your job to deliver it. Once they've read their lines, actors will want their hair done, then need a trip to wardrobe, and probably a visit to the makeup department. With each step, you'll move the actors by clicking and dragging, then give them a hand by dashing Rosie over to their positions to get the work done.

Once the actors are ready and on stage, it's time for a quick prop check. Need a table on the set? Drag one from the props area to the right. Fill all the shadows with the right equipment and you can finally start shooting! Drag the camera man over to his position and the actors get to work. Once the scene is complete, a volunteer clears the stage and you're ready for the next round!

Soap Opera Dash also incorporates color-based combos that function much like Airport Mania: First Flight. Red actors, for example, will turn a gray makeup chair red after they've used it. Drop another red actor in the chair after that and you'll get a tidy bonus, a number that keeps increasing the more same-color actors you utilize. The key to reaching the expert goal in each level is to spam combos like there's no tomorrow! 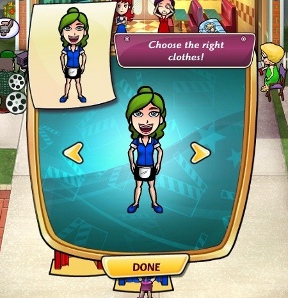 Analysis: Another game in the Dash series, another excuse to perform a menial task that's somehow made fun! Creating a television show isn't as simple as, say, serving a burger or parking a car, but it's still a greatly simplified version of something much more complex, and it's every bit as engaging as the other time management games. Only now, instead of worrying about baked goods, you've got persnickety actors to deal with!

Soap Opera Dash doesn't take any chances when it comes to its design. Just about everything you encounter hits right up the middle for this genre, providing everything you would expect and not much more. That may seem like a down side, but it really isn't, as the game doesn't need to innovate in order to be entertaining. And because of the set-up (actors, makeup, stage props, etc.), the game doesn't play like the other Dash games before it, so the experience is new without having to reinvent the formula.

One shortcoming worth mentioning is the easy at which you'll play through Soap Opera Dash. The game doesn't offer too much challenge, and aside from some hectic levels where you're managing a dozen things at once, you probably won't even break a sweat.

Thankfully, you don't have to be a fan of soap operas to play or enjoy Soap Opera Dash. It's a good looking and easy to play time management game with high quality everything. And without the cheesy soap opera storyline!

I played the demo version and I must say I'm quite disappointed. I think the soap opera theme lends itself well to having quirky characters, funny dialogues and challenging situations. "Miss Management" is the game that springs to mind when looking at how to blend a storyline beautifully into a time management game.
Soap Opera Dash feels empty because it has chosen to show the process of making soap operas as a mechanical bunch of steps - there's a lot of stuff that goes into it and I think this game could have done better to use the premise. I'm quite a fan of the whole Dinertown franchise, but this one would have to be my least favourite.