Let's face it... when you're an NPC in an RPG, your options for glory are pretty limited, especially when it comes to your ability to plumb the depths of the unholy dungeon next door for treasure. But what if you could find some way to motivate all those hapless heroes to do the work for you? In Soda Dungeon, a light simulation RPG hybrid from Armor Games, The Pox Box, and AN Productions for iOS (coming soon to Android), you'll have your pick of heroic hires to choose from as the bartender at the most popular soda tavern around. Seems people are willing to do anything if you have their favourite sugary drink on tap, and by purchasing different kinds, as well as increasing your reputation by upgrading your humble establishment, you can entice different hero classes who you can then add to a party, outfit, and send into the dungeon for you. You won't have much in the beginning, but as heroes are defeated, they flee, leaving behind all the gold and treasure they earned, so you can use them to improve your next party. The gameplay is a series of progressively difficult battles you can either fight manually in classic turn-based style, or have the game auto-battle its way through for you. Once your heroes are all soundly thwomped, and they will be eventually, it's back to the tavern to make use of what you've earned to try again. Once you've conquered all of the dungeon's levels, well, that's just the beginning, and even greater awards and treasure await in different dimensions. With limited ads and completely optional in-app purchases, Soda Dungeon is truly free-to-play with no timers or special currency whatsoever, allowing for endless addictive soda-guzzling fun. 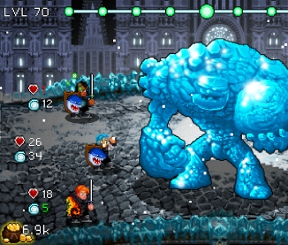 With its fantastic pixel artwork and easy to pick up gameplay, Soda Dungeon is one of those games that's easy to get trapped playing... but in a good way. While its gameplay is repetitive in the sense that you're hacking-and/or-slashing your way through endless battles to grind cash for upgrades, the simplicity of the RPG mechanics is buffered by the way you can customise your team and their abilities with so much equipment and special items, while the lack of a need to grind for levels means combat comes down to care and planning. The auto-battle system... mostly works, though it isn't smart enough to keep your characters from spamming all their special attacks and wasting them early on against critters they can easily dispatch with a severe look. If you get sick of slogging through lower levels of the dungeon over and over, the Wizard upgrade lets you teleport to any floor you've previously visited for a minuscule fee, which is handy for farming gold. Refreshingly (pun intended), Soda Dungeon is completely free. Its ads are short and spaced far apart, and all its in-app purchases, even the removal of ads, can be purchased for the gold you'll earn in game, without it feeling like that's an impossibly out of reach goal. It's a game that honestly feels like it respects the player's time, and in an era of seemingly endless timers and other frustrations, that's incredibly welcome.

It also would have been nice if soda itself had actually featured more prominently in the game. Considering it features in the title, it feels like a missed opportunity to not take the theming beyond the opening cutscene and having it "on tap" to attract adventurers. Why not soda "potions" that give status bonuses before entering dungeons? Finding a fountain of a particular soda type in a dungeon that grants a temporary buff to the class that enjoys it? Coulda-wouldas aside, however, there's still a ton of charm to be had in Soda Dungeon, and it's one of those games that only gets bigger the more you play, opening up things like relics, essence, special combat challenges, pathways that could lead to treasure or traps, and more. If you're craving a plot for your RPG gaming, Soda Dungeon isn't going to offer up much of one, and you'll need to be able to appreciate it for the streamlined experience of stab-reward-more stabbing it is to be able to stick with it long term. If you do, you'll find Soda Dungeon a real gem. Lovingly crafted, surprisingly robust, and a breeze to play, Soda Dungeon is a pocket-sized RPG that'll quench your thirst and leave you coming back for more.

Thank you for all the hard work you do writing for Jayisgames! Your entries never fail to make me smile or laugh. I have to say, your profile is looking brighter than usual as well. Smart and pretty. ;)

Oh... oh.. and the game. I'm glad JIG is always recommending something like this. Best of all, it's free. I might actually put this one on my phone. I'm so glad to read about the ads and such being able to be purchase using in-game gold. Those microtransactions have ruined too many potentially good phone games for me. They're the reason my phone games are the least played.

I have a couple of recommendations concerning that:
Tiny Dice Dungeon
Fallout Shelter

Two GREAT phone games that can be played with minimal-to-no in-app purchases. Thanks to JIG and whoever else submitted this one!