Hey, I think we should have some bonding time. Luckily, Sokobond by Alan Hazelden and Harry Lee is a puzzle game that gives you just that. The goal of each level is to bond all of the atoms together to make one molecule, by controlling one atom that guides the rest into position. However, when the rest of the atoms are trapped in a Sokoban-style maze, you've got to get your electrons in order in order to bring everything together! 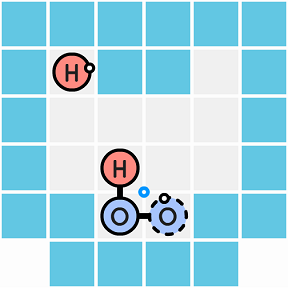 One of the nice things about Sokobond is that you don't have to have any chemistry experience in order to play; you just need to focus on the number of valence electrons each atom has (that's how many loose electrons are floating around the atom, waiting to make a bond with something else). Hydrogen always has one valence electron, Oxygen always has two, Nitrogen has three, and Carbon has four. You control the atom with the dotted outline with the [arrow] keys. When you move into a square next to another atom, a bond will form between the two of you (assuming you both have a valence electron to spare), and you'll move together as a group. When you connect all of the atoms in one molecule with no electrons left over, you've beaten the level.

The tricky bit comes in when you're asked to create the molecules in a tiny space with walls that block your movements, especially when you've accumulated a large molecular chain behind you. In some levels, you may find red splitters that break atoms off if it passes between them, green bonders that add an extra bond between two already-bound atoms, and blue pivot points that your chain will wrap around, allowing you to change its shape without disconnecting. As in many old-fashioned Sokoban puzzles, you'll spend a decent portion of the level rearranging the atoms to get yourself into a good position before you make your final moves to pull everything together. When you do, you're rewarded with a quick fact about the compound you've just created, and unlock a little bit more of an expanding map with a certain familiar shape.

Even if you're not a science nut, Sokobond is very accessible puzzle that only requires you to learn a few simple rules to play. If you're looking a good game to bond to, you need not look further than the element-ary design and tricky challenges Sokobond has to offer.