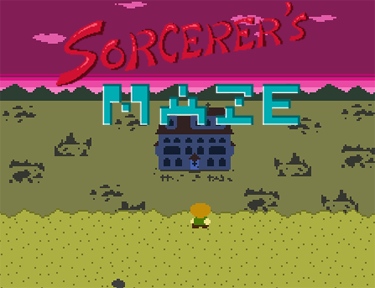 Haunted houses are a dime a dozen in videogames: if Luigi, Lara Croft, Leon Kennedy or the protagonists from any number of other horror games weren't trapped in their spooky prisons, it'd have to take a pretty unique game to make us pay attention.

Sorcerer's Maze is one such title, a challenging and compelling retro puzzler from David Frankel, Alex Camelio, and Tommy Pedrini (No Vinegar Productions). You play as Clyde Michaels, intrepid explorer, who must explore a mysterious mansion that stands alone in apocalyptic desert where he lives. It plays similar to Bomberman combined with one of the NES Metal Gears: using the [arrow] keys, you guide Clyde through the labyrinth of the house, avoiding or destroying skulls, ghosts, mermen and other creepy-crawlies on the way.

It sounds simple enough, but each level plays out like a logic puzzle where you can't run into any of the pieces. As Clyde navigates each floor, he doesn't have the advantage of Snake's radar: you can only see what he can see, and there are a lot of blind corners. If that weren't enough, it's impossible to open some doors unless one has killed all the monsters in a level. By the way, the monsters are color-coded, and the magical blobs that let Clyde kill them only show up once a level. And you don't know where they are until you die a few times.

Some items exist to help you out. While one scroll shows the entire map, another tells you where the exit is. Fluffy kittens give you multiple 1-Ups, which is useful when trying to puzzle out your enemies' patterns by running into them. If you get frustrated, there's a level select option to let you skip to the next floor. Occasionally you'll run into a mysterious cloaked figure who follows Clyde from floor to floor. Who is this figure, and what do they want? 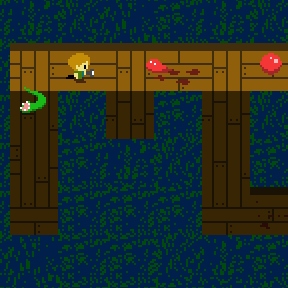 Analysis: It almost feels wrong to play Sorcerer's Maze on a modern computer. It feels like something better experienced on an Amiga workstation or an old NES. The team at No Vinegar Productions replicates the retro experience perfectly, from the cryptic sprite-based cutscenes to the bloops and beeps that serve as sound effects and the pleasant chiptune soundtrack. The detail and care shown in presenting the game's art style are a large part of the game's charm; as I continued playing, for some reason I kept flashing back to playing Bard's Tale 3 on my old Commodore.

Although there isn't much story, there also isn't much need for one. The attraction is all in the gameplay: if you remember trying to fit a rectangle with sharp corners into your palms, then chances are you'll like Sorcerer's Maze for its retro-inspired gameplay style and aesthetic. It's difficult, at times almost impossible, but you're always free to skip to the next level. Just be careful; in your rush to get to the end, you might miss something important. Like the platformers and adventures of old, Sorcerer's Maze rewards persistence and attention to detail. If you want to get the best ending, you'll have to play the game like you would sitting in front of the TV in 1980: trying again and again until you can do the whole thing perfectly, without missing a beat.

does the menu screen freeze for anyone else, like constantly, on any screen other then the new game and main menu screen?

That was a lot of fun! Unfortunately short, though. The music, too, is great. :D My only real complain is that sometimes it feels like it's "sticky" when switching colors while moving.

Is there a better ending than getting the three robe-guys?

also, can anyone explain the storyline of

I'm probably having a dense moment.

@C. Olimar - I found four. That's my guess, is that there's more to be found, and finding them all does something special.

As far as finding the

robed people, I found 2 living ones, and then another one that turned out to be dead (a skull fell out of the robe, and it fell to the ground). When I got to the end,

the two guys were knocked to the ground by the enemy-boss-thing that the game automatically fights for you, and then "I" defeated it.

The game itself was quite fun, and fairly easy (and pretty short). Awesome music. And as @C.Olimar788 pointed out, switching colors can sometimes be hard (it doesn't always respond when you press Z or X).

@bigbrit: The same thing happened to me - I assume it's the transition between levels that does it.

Oh, and @Shudog: No, that's pretty much how games looked back then, if not worse. I thought it looked nice.

There are three living robed figures and a dead one. Can't remember the levels they are on though...

Heh, I finished the game without knowing about switching colors (with 25 lives left over too). At only 20 lvls, so it's a quick trip til its over. With so many opportunities to get lives (especially as 1ups respawn, not sure about kitties though), being too careful (and thus slow) is more of an issue than anything else.

One of the robes I found was just a skull. I think I explored everything though.

For the issue about changing colors not being very responsive: If Clyde is moving, he will NOT change colors.

Very fun, and I agree that the music was really nice.

I did have problems with the controls though. If I wasn't really careful the little guy would go an extra step. There were a couple of times when I accidentally went up the stairs when I meant to go back and explore some area.

Wait, you can switch colours? I thought picking them up in a certain order was part of the challenge! I have been digging this hole myself, apparently.

I couldn't play it at all. Every time I tried to move up or down, the browser window would scroll instead.

Fun game. Although I think it's more appropriate for a link dump instead of a full review..

Quite a nice game. I found the interactions of the cloaked guys interesting. Since I found all 3+1 cloaked guys, I got a "happy ending" kind of ending.

I liked the game, but as other point out: It's short. I don't agree in the review that it would seem "difficult, at times almost impossible". I think that it's way too easy to pose any real challenge. My first playthrough in a casual style left me with over 20 lifes and I only died a few times.

1st level is full of monsters that chase you, or sit and block every hall, and nowhere to go but their mouths. No orbs, no way to get past them or even hide. At all.

What's the point again? Shouldn't the monsters at least move (in directions other than "straight at the hero as soon as they see him") so you can maybe get past them?

I went the whole game without changing colors, too! I had to plan the order I picked them up in. :(

The high score list would greatly benefit from a fixed-width font.

Lovely maze game. Deserves its place in the jay archives. Another example a good story for a game is better than more effects and graphics.

Sure there are improvements: I was never sure (points wise) whether it was better to go through a level quickly or by collecting and killing everything. Preferred the latter - it was more fun.

One lesson I learned: At first I thought all those extra lives were unnecessary (and they are) but I can see now why they should be there - its nice to be able to get them so you can play through the game to and end.

At first I was confused as well. There are orbs on the first level. but the similarity tot he blob monster made me think they were monsters. Hint: the orbs don't move.

Whoa, I was trying to use the Level Select thing and accidentally

triggered a New Game+ . I think it happened when I pressed Z or X. It's a lot harder than the original game, because the timer is so much lower.

I didn't find all the robed figures, so I don't know if the best ending hints about this, but since no one mentioned it before, I guess it's some kind of secret!

I didnt really like this game. It wasnt to fun. I thought it was funny though, how at the beginning, there was a bored boy tripping on dirt, and then he randomly ends up in a haunted house.

I know where all three of them are. Yet I died so I only have two(bummer).

This is right between Atari and NES. Which gives us Technicolor!

Superbly cute, this must have a sequel. By sequel I do not mean the same theme, but a puzzle maze with elements like these and build on it from there.

I'm dominating the high scores!! Seriously though, this game is weirdly un-hard for me. I got through on my first try......it was surprising, usually when a reviewer says the game was challenging, I've broken the keyboard in anger at my stupid, clumsy meat fingers.