It's been a long, strange year, hasn't it? First your great uncle passed away, then you had to move to the odd little town of Queensbury to help your grandmother run the family soup stall, then a curse hits the town and suddenly the only thing standing between the townsfolk and complete chaos is your great-uncle's magical spirit soup recipe. Wait, wha? Seriously, that's the premise behind newcomer Twilight Games' fabulously goofy new adventure, Spirit Soup: The Queensbury Curse. Yes, seriously. 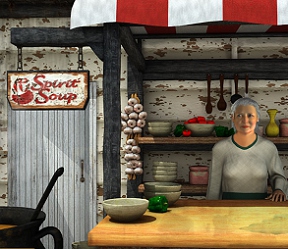 One morning on your way to help grandma at ye olde soupe stalle, the curse begins to manifest itself with strange formations opening in the earth and even stranger spiked trees popping up out of nowhere, slowly strangling the sunny medieval village of Queensbury and it is up to you (and grandma) to find the recipe, suss out the ingredients, solve a few puzzles, maybe get arrested, and (hopefully) eventually save the town from the malificence that is overwhelming it. You know, the basic adventure staples that include an ungrateful dude whose cart keeps breaking down, a slimy merchant who pays non-union wage, an absentee Queen, and her efficient (and officious) guards. As you do.

Spirit Soup: The Queensbury Curse may be billed as a hidden object hybrid but it really isn't. What it is, fantastically so, is a pure point-and-click adventure game with maybe three tiny hidden object elements in the entire story. Spirit Soup hearkens back to the classic adventure days of yore and involves a lot of wandering around using only the click of a mouse to navigate, pick up objects, and solve puzzles and problems along the way. Included within this wacky story are the usual suspects: a changing cursor to indicate areas of interest, a map to keep track of where you've been, a journal to keep track of your keen observations, a scrolling inventory of odd items to be used at a later point, and a rapidly refilling hint timer to help you along the way. All you have to do is solve a lot of puzzles and problems to help this poor town in distress. Or, you know, leave them to their fate. 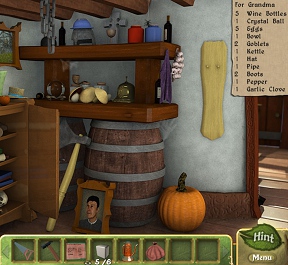 Analysis: Spirit Soup: The Queensbury Curse is over-the-top, goofy, cheesy, adventurey fun of a type not seen for many, many years, hearkening back to the days of such amusements as Monkey Island and the like, a breath of fresh air in a market increasingly crowded by dark, dank, angsty adventure hybrids. You've gotta love a game where despite the curse the townsfolk go about their everyday business, gouging you for free labor, free repairs, and tossing you in the can for picking berries where you shouldn't.

The graphics are sharp, clear, cartoony 3D of the Pixar school, with appropriate, vaguely Elizabethan era music to back up the adventure. The atmosphere is relentlessly bright and sunny despite the urgency of the curse, and the characters you meet along the way are all amusing and so self-absorbed that most don't even seem to know that a deadly curse is destroying the town around them. The puzzles are a bit of a mixed bag, ranging from amazingly simple to complex, and most of them variations on the standards like pipe puzzles and the like. The few (very few) hidden object elements are so fleeting you might almost miss them in the rush to rescue the townsfolk from a doom that doesn't seem to bother them overtly, which is just part of the fun. 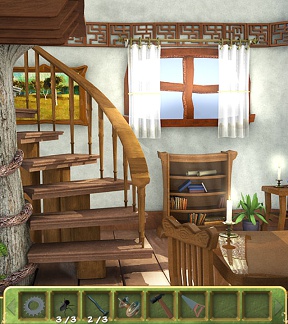 Amazing fun though it is, Spirit Soup: The Queensbury Curse contains a few flaws. Some of the puzzles are almost excruciatingly easy, the hint timer, despite its quick filling time, is of very limited help in some areas, there are a few minor glitches with clickable areas, and the gameplay is rather...well, short, especially if you are not a novice to adventuring. For those who've got more than one quest under their belts we're talking maybe two to three hours playing time, which is pretty short even for these days of incredibly shrinking gameplay.

On the plus side the wacky characters and situations are quite fun, along with the whole premise of the story. How often do you get a chance to play a game where a tasty soup saves the day? Not too often, these days. There are also some extra puzzles of certain varieties that unlock after you've passed a similar type in the game, giving a little extra bang for the buck when the adventure is over. Frankly it's worth it just for the joy of playing a game that doesn't take itself too seriously, opening the way for the amusements of the town of Queensbury and its strange, strange inhabitants.

Can you make a delicious batch of soup to soothe the tortured souls of the curse? Will that dude with the broken down cart (that keeps breaking down) ever get out of your way? Does the Queen really give life sentences for picking berries? Will the stall-holder ever pay minimum wage? Oh, yeah, and will the curse get lifted in time to save the town? Spirit Soup: The Queensbury Curse is worth playing just to find out.

It's a beautiful game! Not being a fan of the spooky genre myself, I might have overlooked this one based on title alone -- that would have been a mistake. I love that it's mostly adventure and puzzles, not just hidden object scene after hidden object scene. It's a bit like a longer version of The Trader of Stories: Bell's Heart.

I need the walkthrough.

I could use a walkthrough as well - stuck at the slimy oyster. I put it on the log, hit it with the hammer and it goes flying into the water. Can't find anything else in the game to do but this.

I understand there is a walkthrough in the works, so hang in there.

Use the Cloth from your inventory to cover the oyster shell after you've placed it on the log. Now you can smash the shell with the Hammer and the cloth will keep it from slipping away.

To open the oyster:

You have to use a cloth (you can find it in the church) make it wet in the fountain and then you can open the oyster.

This is about the lousiest "adventure" game ever offered by Big Fish Games. It lacks everything: good graphics, atmosphere, story, funny remarks, infotainment -- you name it. This is just a game that should never have been made! Taka a look at games as Monkey Island or the old Sierra adventures -- that is what game makers should aim for. "Spirit Soup" is really foul-tasting. Phuiii!

Please someone tell me how to get past the slimy oyster part. I have tried everything and nothing works. Is this a glitch in the game? Help!

fire-fly13 -
Check the walkthough above the comments.

I was not impressed by this game. Kind of funny and interesting but for the most part completely inane. Horrible puzzles. Unfortunately I actually paid for it :-( Don't waste your time!

am stuck at the slimy oyster. I put it on the log, hit it with the hammer and it goes flying into the water. Can't find anything that helps .can anybody tell me what to do?

See the comment above that says: To open the oyster.