Spirits of Mystery: Song of the Phoenix

ERS Game Studios has decided to add more to the fairy tale story of their Spirits of Mystery series in Spirits of Mystery: Song of the Phoenix. Again take the role of the princess of the Dragon Kingdom as you set out to save your groom-to-be of the Phoenix Kingdom. Take down the sinister wizard of dark magic who's trying to turn the wedding of your dreams into a nightmare. It's time to put on those hidden-object/adventuring boots and kick some evil butt! 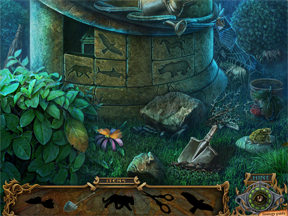 You saved the day, your family and kingdom in Amber Maiden, so now it's time for your happily ever after; you're set to marry the handsome Thyrian and unite your two kingdoms to create peace across the lands. Only there's one problem... another witch has conspired against your happiness, having your fiance kidnapped so that you can't marry, bring the kingdoms together and maybe live out a normal princess life. Maybe. You never quite know if another sequel's in your future, which usually just spells more trouble.

Song of the Phoenix offers the usual fare for a hidden-object/adventure hybrid as far as game mechanics. Use your mouse to navigate through each scene or to manipulate objects, as indicated by the changing cursor. In addition to the usual journal and hint meter, there's also a Golden Phoenix device that can be used in certain locations to hunt for magical symbols. Hidden-object scenes, on the other hand, come in two forms. There are the regular old scenes that we're all used to with the list of objects to find, but then there are the ultra cool silhouette scenes. These work differently in that you're tasked to find the objects that correspond to the silhouettes that you're given. But it's not just finding them, you then use those very objects back on the scene which leads you to find other objects until you arrive at the ultimate one that ends up in your inventory. 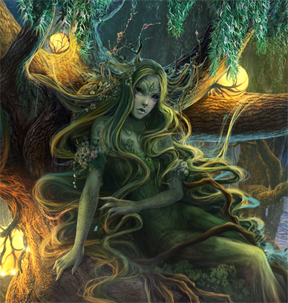 Analysis: There's a lot going for Spirits of Mystery: Song of the Phoenix. It has amazing graphics, decent voice-overs and a wide range of difficulty in its puzzles. That's not even getting into the hidden-object scenes, which as previously mentioned, are not only interactive, but also have more of a sense of realism to them (at least as real as an adventure of a princess in a magical land can be). If hidden-object games are going toward scenes that aren't just a laundry list of items to find, then sign me up for more!

What's also great is that this game offers three levels of difficulty. There are the usual 'casual' and 'advanced' which differ in refilling time for the hint meter and also in whether interactive areas will glimmer, but then there's 'hardcore'. This insane difficulty not only has a slow filling hint meter and absense of glimmer, it also mostly gets rid of the hints that are usually given in areas you can click with the magnifier cursor to let you know what kind of object you need to use there. So just in case you thought these hybrid games were getting too easy, here's one that'll give you more of a challenge.

With all these great things going for it, the part of Song of the Phoenix that doesn't measure up to the rest is the storyline. It's nice to have the addition of the love interest in the mix, but the bad guy just seems like a rehash of the villian from the first game. There's just not as much excitement as you would expect from a great setup given the attention the develpers obviously gave to the other parts of the game.

All-in-all, ERS has created another enjoyable hidden-object/adventure title that shows them moving forward in the genre by adding new and interesting elements to the gameplay. Song of the Phoenix promises many, many hours of fun, and I'm sure I won't be the only one hoping for a third Spirits of Mystery.

Spirits of Mystery: Song of the Phoenix Walkthrough now available!

Chapter 2: Outside the City Gate

Path to the Phoenix Kingdom

Spirits of Mystery: Song of the Phoenix Walkthrough
Chapters 5-9

Chapter 5: Castle on the Rock

Isa's Office and Prison in the Rocks

Outside and Inside Isa's Quarters

Scorpion Rock and House in the Woods

Chapter 2: Outside the City Gate

Path to the Phoenix Kingdom

Spirits of Mystery: Song of the Phoenix Walkthrough
Chapters 5-9

Chapter 5: Castle on the Rock

Isa's Office and Prison in the Rocks

Outside and Inside Isa's Quarters

Scorpion Rock and House in the Woods