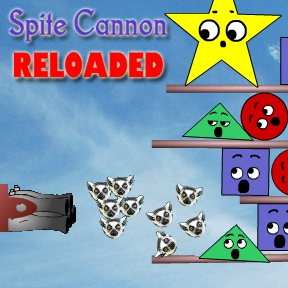 How often do you get a chance to shoot lemur heads out of a cannon towards a bunch of colorful geometric shapes with alarmed eyes and gaping mouths? Not often enough, that's for sure. That said, do you wake up each morning with a yearning to inflict pain on anthropomorphic circles and polygons just for spite? If so, we have the perfect game for you.

Spite Cannon Reloaded is a significant expansion of Tomf's Spite Cannon from 2010. In this projectile physics puzzler, you control a cannon (a very spiteful one, apparently) to fire cannonballs at a series of cute-looking shapes to either destroy them or make them fall off the screen. You aim and shoot with the mouse, and you don't need to worry about shot power, since every shot is equally strong. While shots cost money, you earn additional cash by damaging and destroying the different shapes on screen. You spend extra money in the upgrade store, where you can increase your cannon's firepower, select different cannonballs, and unlock other bonuses.

If you're looking for a truly casual game experience, Spite Cannon Reloaded should certainly satisfy. Its levels (an impressive 80 instead of 30) are quite simple to pass, the graphics and tone is light-hearted, and the upgrades are appropriately silly. The game has quite a bit of charm and personality, and feels just right as a fun break game. Spite Cannon Reloaded is not without its faults - some levels can't be beaten without visiting the upgrade screen and switching ammunition, but thankfully it's possible to skip troublesome levels with a little earned cash. There's even a bit of replayability thanks to the included level editor and ability to copy and paste level codes to attempt a challenge from the greater community. All told, Spite Cannon Reloaded is a nice game you shouldn't ignore out of spite.

I don't know if it was by design, or a flaw, but I found an exploitable situation that a patient person could use to get every upgrade easily. I don't know that it detracts from the game that much since some levels the highest upgrades will actually hinder your efforts, but worth pointing out.

Resetting the level doesn't reset your money to what it was at the start of the level. On first brush this appears to be a drawback, as if you mess up you can lose money easily. Bun on certain easy to beat levels

you can easily rack up close to 4K then reset the level before the last piece is gone and keep rolling.

It may be by design, but it may not.

Even if you lose money when resetting,you can gain some with some levels...

Is anyone else getting super annoyed with level 29, the hourglass? How many times must I knock out the bar and hope that all the balls will fall out without getting stuck? I guess the only way to do it is to make enough money to get the exploding ammo, which is easy to do when you reset the level enough times.

"...the graphics and tone are lighthearted"
HAHAHA no. I'm not buying that. Unless by "lighthearted" you mean "toddler doodles knocked up in 5 minutes on MS paint".

@Username: That's actually where I accidentally made a ton of money. I had to try the level like 10 times to get them all to fall out the bottom.

Game was fun enough, relatively easy to beat, and "short" in time spent but "long" (aka just right) in the number of levels provided.

The graphics appear to be straight out of Super Stacker.

I enjoyed the game but would like to have seen the level number appear in the level. And/or the ability to switch weapons with the level itself. I you've played through the game and want to return to certain levels to try them with upgraded ammo, it's hit and miss to find a particular level.

Entertaining idea here but semi-trained lemurs could finish all 80 levels without breaking a sweat.

The difficulty curve is non-existent.

3,662 Views
5 Comments
chrpa— Jayisgames needs your help to continue providing quality content. Click for details Rinnogogo left you astray in a small train station. All alone, you wander around not knowing what to do - you can't leave the station because there isn't...  ...