If you want to build the greatest gem trade empire, you've got to hire the best gem collectors, network the best gem shippers, and attract the richest gem enthusiasts. As luck would have it though, they all want to be paid for their services... in gems. In Splendor, the mobile port of the strategy board game by Space Cowboys, gems beget gems, and you've got to get to them first. Gems taken from the supply are used to buy your workers who provide more gems for you to use, but you've got to prevent your rivals from doing the same! 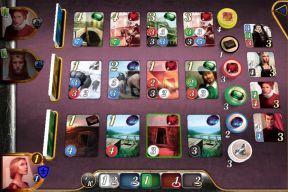 The tableau of play consists of three rows of four cards, and six stacks of gem tokens on the right. To buy a card, you must be able to pay the cost in its lower-left corner, using gem tokens you take from the supply. On your turn, you choose one of four options:

All of the tokens players take and cards players buy are visible for other players to see (tap an opponent to see their stock). At the end of your turn, you can't have more than ten tokens in your stock, and you must return excess tokens to the supply. "But wait," you ask, "how do I buy those crazy top-row cards with costs of over ten gems?" That's where the cards come into play. Every card has a bonus gem in the top-right corner; when you buy a card, that bonus gem counts as a permanent gem in your supply, which can be used to pay for cards, instead of using tokens! Bonus gems can also be used to attract the nobles waiting on the sidelines; when you have enough bonus gems (tokens won't count) to meet a noble's cost, they join your company as a three-point bonus.

Some cards (mostly in the top two rows of the tableau) have numbers in the top-left corner; these numbers are the prestige points you earn from buying those cards. Once one player has 15 prestige points (including points from nobles), the endgame triggers, giving other players up to one more turn, such that all players have an equal number of turns. Whoever has the most prestige points wins the game, and the envy of the gem-trading industry! 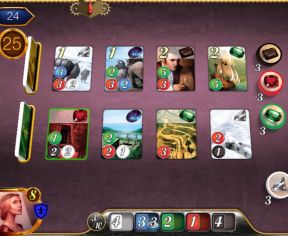 Analysis: While it doesn't take much to learn the rules of Splendor, its price is probably the largest barrier to entry. At the time of writing, the app costs USD$6.99 with no demo available; it's a high price, but it's still somewhat middle-of-the-road as far as ports of popular and award-winning board games go (Ticket to Ride is $1.99, Carcassonne is $9.99). Considering the boxed versions of these games can run from $30-$50, a fully-functional digital version for under ten bucks is appreciated, though it still feels like a steep commitment to go in on blindly. (Also, you don't get to play with the satisfyingly heavy gem tokens that come in the box.)

Of course, they're going to justify the price with some decent features. While playing against the AI, you don't play against typical easy-medium-hard opponents, but rather opponents that use certain strategies, like a balanced jewel collector or an opportunistic card grabber. You can pass-and-play the game with up to four players, though there isn't any online play yet (hopefully in a future update?). Also, the app provides a challenge mode with 18 puzzles, where you have to reach target scores within a certain number of moves, or try to pass a slowly growing target as quickly as possible.

There are only a few rules to learn in Splendor, but the changing setups lead to challenging strategies as you try to control the board. Featuring art from the board game, this mobile port adds in a bit of extra Renaissance flair with period music (though you wouldn't be faulted for turning down the volume while playing). While the price might be a hurdle, Splendor is a game that's worth its weight in diamonds. (Actually, maybe that metaphor doesn't work for a digital product?)