Role playing games aren't an uncommon sight, and neither are fling-based arcade games. But if you combine the two, throw in a dash of strategy, dozens of fish/cephalopod puns, and layer on some gorgeous artwork, you've got something truly rare. SQUIDS Wild West is the follow-up to the original SQUIDS game, combining a number of gameplay elements into a casual game that can ride two seahorses at the same time! 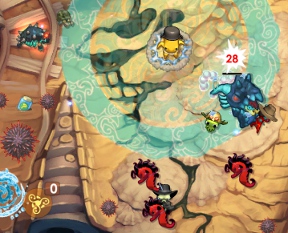 A lot of critics compare the SQUIDS games to Angry Birds, but this isn't entirely accurate and, honestly, doesn't do SQUIDS the justice it deserves. The game takes place in a top-down perspective and puts you in control of four squids at a time, each with his or her own personality, stats and abilities. You move by pressing on a squid and drawing back, stretching its tentacles to create a good snap that will send them flying off in the opposite direction, collecting items, opening treasure chests, and damaging enemies in the process. You have limited traveling power per round, and once your entire team has a go, the enemy gets to have its turn, so there's just as much strategy at work here as there is arcade skill and blind luck.

Each level has a set goal, ranging from defeating all enemies to making it to the exit point or something unexpectedly in-between. Before each stage you can pick your party, mixing and matching the different classes to form a proper posse that can tackle the challenge at hand. Healers, for example, tend to be weaker on the attack but can heal friendly squid by bumping into them. Shooters have a nice ranged special ability, and scouts can travel long distances with each move. You can level-up these party members, equip them with hats (some of which bestow stat upgrades), and purchase items in the store using pearls you collect in the stages, so there's a nice RPG flavoring to soak up in addition to all of the action and strategy. 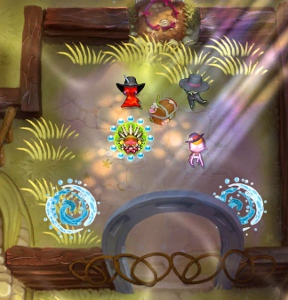 SQUIDS Wild West deals with terrain as well as enemy and party placement, and you have to be just as aware of your surroundings as you are your hit points. Urchins are often sitting around the stage, just waiting to damage anyone (friend or foe) that happens by. Exploding coral, swirling vortices, and bottomless chasms that swallow all who slip off the side must also be dealt with, making SQUIDS much more than just a "use the most powerful moves to win" sort of game. You have to exercise subtlety, you have to employ smart tactics, and you have to use your items wisely!

Analysis: SQUIDS Wild West is the result of developer The Game Bakers tweaking the original formula based on player feedback. The core of the experience is the same, but plenty of new things have been added, including twice as many missions as the first game, new enemies, four new heroes, new helmets, rideable seahorses, and a handful of other new gameplay bits.It's the very definition of a good sequel, and best of all, you don't even need to be familiar with the original SQUIDS to get a kick out of this one!

For all its attention to being casual-friendly and incorporating elements from many genres without watering down the experience, SQUIDS Wild West still takes a little time to get into. It's charming and unique when you first start playing, of course, but the game's real strengths don't set in until you're several levels in and start unlocking new characters, seahorse mounts to ride, and deal with smarter enemies. At this point, you'll see that SQUIDS isn't messing around when it comes to smart gameplay or creative content.

SQUIDS Wild West It's a remarkably well-polished game that looks gorgeous and is an absolute joy to play. No level grinding and no frustration, but there's still challenge and character improvement to be had. The SQUIDS series is a prime example of what happens when a developer loves their game so much, they actually pour their hearts into making it the best product it could possibly be.

My biggest complaint with the original Squids is the crazy high prices of the in-app purchases. Maybe I'm just not that good at the game, and there's some really clever strategy I'm missing, but I'm about halfway through the missions and I'm having trouble beating any levels without doing some serious grinding. To buy enough pearls to avoid grinding for the rest of the game costs about $20. I can't imagine paying that much for any mobile game, let alone one I will be done with as soon as I finish all the missions.

Does Squids Wild West mitigate any of these problems? Are the in-app purchases less expensive, and is it easier to earn pearls by replaying levels?

I didn't really need to buy any pearls, but I'm also notoriously frugal and thorough when I play RPGs. I always kept a supply of reviving items on hand, because I HATE falling off cliffs. Other than that and one or two hats, I always had a good stock of pearls on hand at all times. I also fastidiously opened every chest and gathered every shiny thing I could find, so that might have something to do with it. :-)

The IAP packs aren't just bundles of pearls this time around, they actually give you items and things. They're also much less expensive and much more dispensable than in the original.