Please note that this game deals with themes such as child abuse that some people may find upsetting.

Alice lives in Shadeling Village in the Land of Time, a place where nothing ever changes... until the day the great clock's hands go missing and time everywhere grinds to a halt in the dangerous Land of Life. With her friend Tiska stuck working on repairs, there's nobody else but Alice to venture out into the Land of Life and retrieve the clock fragments. Standstill Girl, a free indie RPG by Sky Scraper Project and translated by vgperson, puts you in the role of stubborn, silent Alice as she travels the Land of Life to put things right. But who is Alice, really, and why doesn't she live in the Land of Life with other humans? What history do she and Tiska share? With multiple endings and secrets to unlock, Standstill Girl is both unsettling and intriguing in equal measure. 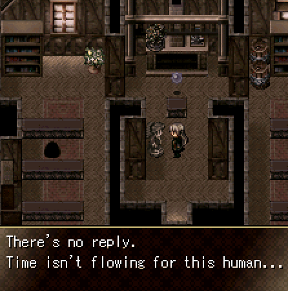 Because time has stopped, the Land of Life is overrun by aggressive impurities known as Time Scares that it's up to Alice, as a fledgling Time Warden, to destroy. While you'll encounter a lot of them as random battles, your primary concern is to destroy all the coloured Cogs in each area protecting the Clock Hand Fragment. Though combat is turnbased, Standstill Girl handles things a little differently than your typical RPG, both by allowing you to equip and swap out various skills and abilities, as well as relying on Emotion Crystals. Granted one per turn, ECs are what allow you to use those skills you've equipped, and stockpiling them by using moves like Guard (which doesn't cost EC) allows you to use even more powerful hidden abilities. Some attacks also use LP (Stamina), or both LP and EC, but since that also functions as your hit points, more or less, don't get go using it up willy-nilly. Instead of experience, when she defeats enemies Alice gains Force Points she can spend to increase her Stamina, Power, and Speed. Force can also be traded at shops to buy more of any item Alice has previously found. 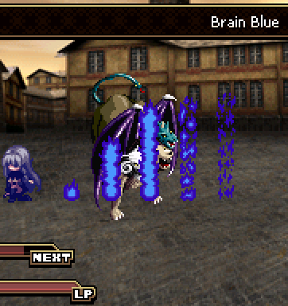 Admittedly, while its combat mechanics are different, they're mostly different just to be different, if you catch my meaning... you'll still have to grind, just for Force Points instead of levels. Since Alice regenerates LP out of battle, it's easy to develop a tactic that simply overpowers most enemies in two turns once you've put some Force Points into her Power and Speed. (In my case, Guard followed by Brain Blue.) Despite being a relatively straightforward RPG, but one of the ones I've enjoyed the most in a long time. It crafts a compelling, mysterious world bit by bit, feeding you clues rather than hammering you with clunky exposition, and keeps you hooked as a result. Pay attention to your surroundings and you'll notice some unsettling things. Those enemies and areas have some strange names, don't you think? And what's up with that building on the south side of Shadeling Town? So much about Alice's past and the world is hinted at and implied rather than stated outright. Alice's story isn't a particularly happy one,and the gameplay will develop a pattern early on some may find too repetitive, but it's still an impressive experiment in contextual storytelling that looks great and will keep you hooked for the few hours it takes to play through.

Please note that this game requires the free installation of RPG Maker 2003 RTP to run, although alternatively you can run the included RTPFaker.exe file in the download for Standstill Girl if you prefer.

The RTP download link is not working for me... It redirects me to crankeye.com

I'm nearly done this awesome work of art, but...

I'm totally confused at The Garden of Creation. I can only walk so far before there are no more bridges. How do I get on other platforms without using a bridge?

Get a running start to the dark circles, you can jump over them.

Depending on your ending, you may get a chance to fight Order. If you manage to beat her, do let me know, because I have no idea how...

(Or the bonus boss.)

How do you beat the second boss? I've tried over 10 times and still haven't!

Be stronger? *shrug* Go grind some more. I recommend having high speed so you can heal every time he attacks, for example.

Maybe... but he has an ataack that can keep me from healing for 3 turns. Have you beaten him?

I used the AGL+ accessory. Also, have "pleasure fruit" in your disposal. It's immune to dizzy.

I've beaten five pink orbs and now that guy (Tiaka or whatshisname) has ran off somewhere and I can't find him anywhere?

Walk through the info hut.

Where's the info hut? I found Alice's Room, Dreamling's shop and a Mental Hospital, but I can't find the info hut anywhere in the village?

You can't see the door, but it's there.

The entrance is obstructed nearby the planting pot.

I finally beat all the bosses. Yay!

If you got "Element Wall" and "Colorful Corset", then no fight is unbeatable.

I am searching everywhere in Pit Beyond Town but I cant find the red shadeling.. can someone help me?

nevermind.. looks like the power of posting is really true! :D

Ugh, I think I messed up my save file somehow -.-

I died somewhere in the Pit and when Tiska brought me back, no matter how I move I always face forward. I can't go down the stairs, I'm guessing because it requires a different animation facing sideways, so I'm stuck unable to do anything. I made the mistake of saving before I closed it to try and restart it, and now it seems stuck that way. Does anyone have any idea how to fix this? I'd really not like to have to start over so close to the end...

You saved every time into the same slot?! When there are 15 for you to spare?!

Why is there still no walkthrough? And how do I defeat the Red Shadeling in Scholar Town who uses Meaningful Double Suicide?

That accessory only gives you a 1 in 10 chance of blocking an attack. I'd wait until The Pit area where you fight the final red Shadeling (There's a hidden passage in the area before the last red cog) as that one gives you Element Wall which is guaranteed to block the attack. Either that or use Seraph's Six Wings during battle as you shouldn't need it for either the boss in the Pit area or the final boss if your stats are decent. Although if you want to fight the secret bosses, I'd save it.

And now my turn to ask a question. Need help defeating the secret boss Apparition Mother as her strongest attack catches me off guard every time. Do I just need to be stronger?

Nevermind. Finally beat her by increasing my agility. Now just one more to go. Might need to grind more to beat him.

When I exit the game it causes a blue screen? Does anyone have the foggiest idea why that may happen?