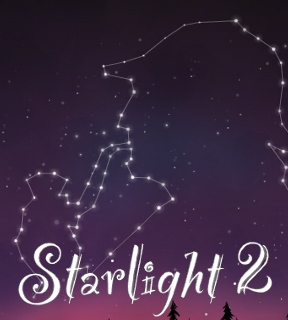 Starlight 2, the sequel to the first Starlight game, is a puzzle game about finding pictures in the night sky. Click and hold on the screen and move your mouse around to rotate the stars. The object is to move the connected stars around on screen until they snap into place and form a picture. Whereas the original was extremely liberal about awarding you success, the sequel demands you be a bit closer to the final product before it grants a level win. This time around, the game features a "Pro" mode with more difficult images, a "Quiz" mode, where you try to guess the image hidden just by looking at the stars displayed.

Whether Starlight 2 sweeps you off your feet largely depends on what your grievance was with the original. The difficulty has been increased, somewhat, and the additions of a level editor along with additional gameplay modes are a nice touch. Despite the new additions and the same lovely music and visuals, it feels like there's still something missing from the game. It's hard to nail down what, exactly, that is, but it just isn't as engaging as you might think. Part of this, at least, is down to the extremely random assortment of images; finding actual constellations would have been nice, but instead you're flip-flopping between pop culture characters and unrelated animals and symbols. Maybe a story mode, where the pictures, when revealed, displayed parts of a narrative, would have provided a much-needed bit of immersion to the game. (Perhaps a job for a few hardy souls and the level editor? I smell a challenge!)

Starlight 2 doesn't quite make the most of its original concept, but that doesn't mean it isn't enjoyable, and it's a big step in the right direction. While some people will find it more fun than others, the simple gameplay and striking visuals makes it a clever concept with a lot of potential and charm.

Pixel hunting, really? I played the original, and the controls were not as touchy last time. The stars don't react as quickly, which means you could be in the right spot but you won't know for a second. Or vice versa.

When i saw Sherlock Holmes I just had to play :D

This game is rendered UNPLAYABLE by the horrendous s - l - o - w - n - e - s - s of the movement. Did the pointer somehow get coated in glue? Are the stars swimming in molasses? How am I supposed to make tiny adjustments in a timed game when I have to wait three to five seconds to see the effect of each alignment?

The first version was over-simplified but entertaining nonetheless. This version is exasperating.

I'm not having any slowness at all like what you describe, AaronzDad. Did you somehow anger the internet Gods? The movement speed for me is identical to the original. Have you tried making sure the game is the only window you have open? If you have a less than stellar computer, the game may be demanding more resources.

Pixel hunting indeed. It took me up to one full minute to find the proper point even though I identified every image in less than 5 seconds.

The quizz mode is incredibly annoying, with additional stars that are not a part of the item you're trying to identify.

And last but not least, there is absolutely no replay value.

It's funny, the developers have obviously retooled the sequel based exactly on the criticisms levelled at the first game, but I agree- there's something unsatisfying and cold about this one, something I can't quite identify. I played this one pretty far along, but just couldn't really care.
Coign of Vantage, reviewed long ago on this site, is still the benchmark for this particular game style as far as I'm concerned. Great game.

Not impossible, but annoyingly sluggish...and I finished all the levels, to end up with a score of...0.

My biggest complaint about the first one is still present: that stupid screen-fill flash deprives me of the satisfaction of actually seeing the thing snap together.

It's almost there, a little closer, then I see nothing, then I see a completely stationary picture.

I laughed so hard when I saw Dr. Gregory House! And I screamed when I saw the USS Enterprise! (I'm a big fan) I think the details that are in the "star pictures" are fantastic, especially for the people like Shakespear and stuff. It's a nice easy going game although my game was sluggish as well...

Well I'm glad I'm not the only one swimming in syrup here.

I tried rebooting the computer, shutting off all extraneous processes and playing the game in a solo window.

Still terrible lag on the movement. Fine tuning the adjustments is maddening this way.

was hoping "quiz" mode would be trivia, as in type in the reference after you've completed the picture

anyone know the name of the music in this game?

Sorry to hear about the slow performance many of you have been having; I've had only one instance of lag so far (lucky me :P).

If they made the game for iPhone, that'd be great!

I can't play--I get a message that Adobe flash is requesting access to my cache, but I can't click on "allow" "deny" or anything else. Too bad.

I didn't experience any delays and complete Classic game in 19 minutes with 7440 points, since I've seen this game today at the first time. And it seems to be Ludovico Einaudi music, but I'm not sure.

They have released a similar iPhone app, blueprint 3d works well on the old touchscreen. Another great game