Any self-respecting definition of steampunk must involve goggles. Goggles, goggles, and more goggles. And Sean Connery. Sean Connery is pretty much essential to any discussion worth having.

For a more entertaining schooling on the nature of steampunk than Wikipedia's, and a less nonsensical one than mine, download a trial of Steam Brigade from Pedestrian Entertainment. Believe it or not, this downloadable game is a side-scrolling real-time strategy game, and an exciting one at that. 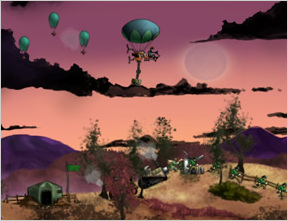 The only unit which you have direct control over is your unarmed steam-powered Airship, which has a magnet attached that allows you to pick up and move units, yours or your enemy's. Your goal in every level is to get an engineer into the opponent's factory, which is always placed at the opposite end of the map from your own. You accomplish this through the use of several different unit types, pitting them against your enemy on the field of battle. Money is your main resource, though thankfully you don't have to collect it like in traditional RTS games. It simply builds up over time.

You have several different units to choose from, ranging from basic infantry to armed whirligigs. There are also several map elements that you and your opponent will vie for control over, including bunkers and gun emplacements.

After building a unit it appears outside your factory and begins its inexorable march to the right. You can only affect its fate by either keeping its path clear from harm or by directly picking it up and dropping it somewhere more strategic. You may also pick up and drop enemy units from great heights and watch them fall to their death, but your foe is a master at that tactic as well. 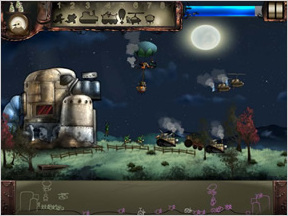 As you whizz around the battlefield and take fire from enemy anti-air units, you lose steam, which in this game is your airship's health bar. You replenish your steam by floating near your factory and filling up, but this may force you all the way to the rear of the battle at a key moment, so it's usually in your best interest to stay just short of the front lines.

Analysis: I enjoyed this game for a lot of different reasons. The production values are superb; and not just the graphics, which are beautifully stylized. The music is well-done, the story is well-written (cut scenes are in verse, no less), and the game as a whole has the polished feel of a retail offering. The designers' dedication to their work is present in every element of the game.

The gameplay is fast and fun. I never spent more than 15 minutes or so finishing a level, of which there are 12 total in the campaign. There is also a configurable skirmish mode, though at this time they only offer games against the AI. Multiplayer, as well as a level editor, is promised soon on the developer's website.

My one quibble with this otherwise excellent game (besides the lack of multiplayer) is how each level, over time, blends into the next. Despite the interesting story elements and different units that are gradually introduced, you are basically playing a giant game of reverse tug-of-war. You churn out unit upon unit until you gradually push your opponent back far enough to be able to drop an engineer in their factory. The missions lose their distinction once you've gotten the hang of gameplay.

One way to remedy this would be to implement different objectives for different missions: hold a particular bunker for a certain amount of time, build a certain number of units or unit types, shoot down 3 enemy airships, etc. This would create a need for a different strategy than just the scorched earth strategy that I found most effective in each level. At some point down the road maybe even adding a vertical component to the ground units would be interesting, like a watchtower or a bridge over low ground, allowing two different levels of play while still keeping the side-scrolling paradigm.

In spite of that, Steam Brigade is a fantastic game from an independent developer that deserves our support. In addition, your purchase will also help us maintain this site and allow us to continue to bring you the very best in casual gameplay.

Yes this game is fun, that's why I submitted to be reviewed but dancemonkey you beat me to the chase. Nice review!!!

This game looks amazing! The "steampunk" genre of games and movies have always excited me and entertained me. Has anyone seen a Mac version of this... anywhere? :(

This is essentially a remake of a game that a friend of mine and I used to play multiplayer on his macintosh network. I think it falls a bit flat without the multiplayer.

Anyone remember what the original was called?

Bad game. The first level in the campaign with balloon bombs is pretty much unbeatable on medium difficulty. They say to use the flak tanks, but they do not hit the bombs until they are right above me anyways, and then I lose 3 units. Not to mention that the bombs negate any possibility of moving forward and dropping his units.

Brandon, you're wrong, it's quite possible on either medium or hard. A few tips:
1. Have your steamship soak up some of the damage that would otherwise be dealt to your pawns. If you get back to factory before losing too much health, you've lost nothing but time.
2. The anti-air thingie can shoot at farther balloons, as well as at the ground, if you pick it up. Jiggle it to get it at the right angle.
3. Drop the enemy's tanks on his other tanks/units. From high up, this blows the dropped tank, which in turn kills whatever's too close.

Ed, was the game you're thinking of "Rescue Raiders"? The developers credit that game as a major inspiration.

Here's a link I meant to include in the review but that just fell through the cracks. It's a page by the developer with some background info on the game, including the Rescue Raiders reference.

Some good news for those of us out there using Macs!

"Do you think Steam Brigade will run on my computer?"
Probably! That is, if your computer meets the following requirements:

I hope soon is sooner than.... soon. This looks very cool, i hope the demo lives up to my expectations.

Thanks Drew! Turns out it was Armor Alley, which the wikipedia entry on Rescue Raiders also mentions.

Funny, I remember it being black and white, but now I see the screens it's all coming back. My friend worked in a desktop publishing house which had plenty of macs on a network. We used to go in after hours just to play games, and an all-night Armor Alley MP match was common. Good times.

And bj8rn - I hope you remember what the ZX robot game was - sounds cool.

I'd be more comfortable with your reviews if the "sponsored" status was a little more prominent than a single, tiny tag and an ambiguous paragraph right at the end (I usually stop reading before 'analysis' so that I can give it an unbiased go myself). Maybe something more visible at the top?

To be honest, this game is probably quite good but not for me. However, I'm concerned that we're just seeing so many arcadetown games here - yes, we can go on arcadetown and see these games ourselves. It's disappointing that I go onto this site time after time and recently most of what I've been seeing is shareware with the same feel from the same publisher.

> "I go onto this site time after time and recently most of what I've been seeing is shareware with the same feel from the same publisher."

I'm sorry you feel that way. "Most" of what you're seeing on this site continues to be a hand-picking of the best creative and innovative free content available on the Web. That will never change.

Arcade Town provides us with downloadable games that we also hand-pick to select only the best of these try-before-you-buy casual games. We have a partnering arrangement with them in that we make a commission from the games that are sold directly from our reviews. This has become necessary for us because as the website continues to increase in popularity, so does the cost of providing the site. I hope you can appreciate that.

We will continue to provide the same or similar content you have come to expect from us, and also these sponsored reviews to help support the site.

I can make it so that you don't see any sponsored reviews if you make a donation to help support the site directly. Is that an option you would like to have?

bj8rn: I believe you might be thinking about the game Z, by Bitmap Brothers?
http://en.wikipedia.org/wiki/Z_(computer_game)
It used to be one of my favourties and we'll see how this goes when I get it. Xd

An hour-long trial is not long enough to play the whole campaign. :(
A tip:

You can "arm" your airship by picking up a flak truck and flying around. Very useful for dealing with balloon bombs. (Your adviser suggests this at the start of the level, if you remember.)

We have a partnering arrangement with them in that we make a commission from the games that are sold directly from our reviews.

That seems reasonable - I didn't realise this before.

I agree with Colon--I'd rather the notice that this is a sponsored review be more prominent and higher up in the article. (To be honest, I'm not crazy about the whole idea of blending criticism with sponsorship to begin with, though I sympathize with the situation you're in. But things like this have a history of not turning out well other media.)

Somehow Armor Alley is more fun for me, but maybe I'm just not a big fan of steampunk..
For all you steampunk fans go watch the movie SteamBoy, the game creators were obviously influenced by it.

While I agree that a sponsored review ought be clearly labeled, really, I thought it was clear that this was a trial version. I enjoyed it enough to buy the game (I had a recent loooong plane ride :))

Different goals would be nice, and I found the non-mouse controls a bit clunky. But the artwork and overall atmosphere made up for a lack of depth in gameplay, I thought.