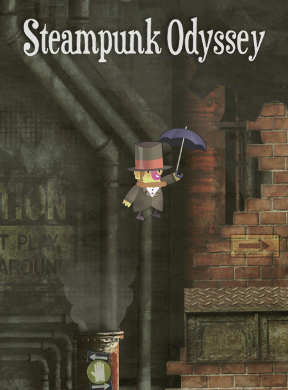 The 16th American president was one truly awesome dude, capable not only of ending slavery, unifying a nation, and pulling off the swankiest of fashion statements, the stovepipe hat, it was recently reported he was also most skilled at making vampires itch from a cardiac wood allergy. So when Abe (Abraham Lincoln, ladies and gents) needs your assistance through his Steampunk Odyssey, how are you going to refuse?

Move ramps, spin gears and employ steam to escort the distinguished bearded one out of the dark, mechanical city in this point-and-click puzzle adventure from Mif2000. Despite the Homerific title, this undertaking is more amusing afternoon stroll than arduous, decades-long journey and, once you get the timing down in a couple areas, poses little challenge. Meditative music, a smoothly responsive interface and a landscape that's aesthetically appealing despite the soiled grittiness of the steam era, inviting the eyes to gander freely, offer up the majority of entertainment, relegating the gameplay to merely a tactile way to engage in this artwork. It's enjoyable yet too short, leaving you wanting more great moments with Mr. Lincoln. But, while not the Gettysburg Address, Steampunk Odyssey might be just symbolic enough to perk up the rosy-cheeked optimist in you.

Terrific graphics and mechanics! But to me, gameplay seemed slightly redundant, and it was way too short.

I liked this little game! I kept waiting for the stakes to go way up, but instead it maintained a slow pace and simpler challenges that are great for someone who gets stressed by platform type games. I could have played tons more and had already decided to keep trying even if it got faster and harder because I so enjoyed the combination of pointy-clicky fun and the lovely art and sound.