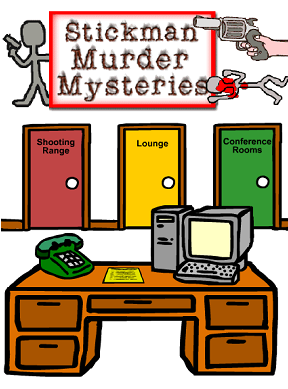 The story you're about to hear is a fib, but it's short. The names are made up, but the problems are real. Stickville is like many other towns. It has churches, two car washes, three movie theaters, bike paths, sparkling beaches, a synagogue, fishing spots, and the best darn doughnut shop in the tri-state area. However, scratch off a little of the MS Paint, and you'll discover its seedy underbelly: murders, drownings, corpses, arson, manslaughter. When a crime happens, the town's innocents may rest assured that the Stickville Police Department will stop at nothing to bring the perpetrators to justice. You're a homicide detective, working the day watch at the SPD. Right now, the inbox has five open cases to solve in Stickman Murder Mysteries, a series of point-and-click mystery adventures by Norm and Company.

Apart from the first chapter, which has been remade into flash, the Stickman Murder Mysteries are done entirely in HTML, though they run fine on modern machines. Use the mouse to click on objects to examine them, doors to travel to them and, when on the map screen, buildings to travel to that location. There will be times where you will be prompted to enter addresses or other information to continue your investigation, so be sure to take notes. If you're stuck, taking a nap or checking around the precinct might help you head in the right direction. Once you have collected all the evidence, go to Da Chief's office, and he'll ask you a series of question to make certain that you have the correct culprit. Good luck, detective!

Analysis: By the standards of the internet, the five Stickman Murder Mysteries are old. Like, more than ten years old, and from a time when people thought the ability to display a .gif of a dancing rodent was the height of web design. It's certain that its relative primitiveness will turn some away. Those who stick with it, however, will be glad they did, because this is a fun little collection that every lover of mystery games (and Scene of the Crime in particular) should appreciate. 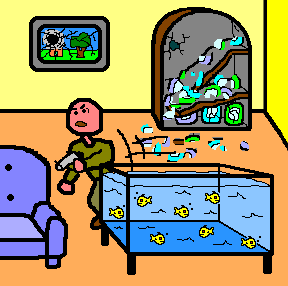 The graphics may be crude, and the programming kludgey by modern standards, but where Stickman Murder Mysteries shine is in its plotting. Chapter 1 starts with a relatively straightforward case of murder, but as the series goes on, the crimes get ever more devious, and the investigations ever more complex. Don't let those smiley stick-people fool you! These are some serious crimes being investigated, with criminals that mean business. The content may not be to the level of Law and Order: SVU, but it definitely reaches Law and Order classic (CHUNG CHUNG). That said, a sense of old-school internet wackiness is present throughout, which keeps the tone light. There are a ton of little touches, easter eggs, and red herrings to find, for no other reason than to be goofy, and will keep a pleasant half-smile on your face as you play.

Besides the overall MS Paint-iness, some downsides are worth mentioning. The few times that you must type an answer in are generally forgiving, but there are quite a few things to keep track of. Clever investigators might want to open up Notepad before heading on in. Likewise, the medical examiner sections where you use the CDX machine is a little unintuitive to work with, which is a shame since it is often necessary to discover a vital clue. Finally, it's worth noting the site from which we have hosted the games had some ads and links to questionable content, so, in the words of Sergeant Esterhaus, let's be careful out there.

The five chapters of Stickman Murder Mysteries will keep you puzzled and entertained for quite a bit, and saddened that the promised sixth chapter never quite materialized. Still, while they are oldies, they are definite goodies. So play through them, and earn your place in the Stickville PD hall of fame!

Oh wow, haven't seen these in FOREVER! I used to love these games...I think they're what got me so into casual internet games. And they hold up pretty darn well after all these years, too. *sniff* Now I'm feeling all nostalgic... :D

Thanks for posting these!!!

I agree with Sessie, thanks so much for posting these - the Stickman Murder Mystery series were the first point and click games I played, and it was definitely love at first click (so I guess they are to blame for a huge amount of time when I probably should have been doing grown up stuff!)

In fact, I have just started replaying them and still completely love them. A good find for anyone who likes a little bit of pointery and clickery.

I had a great time until, on the fourth game, I clicked on something on the computer that took me to ad sites and there was no way to get back to my saved game. Ruined it for me.

You might try using your mouse to right-click in the game window and choose "Back" if that ever happens again. These older games are HTML and are a tad clunky in their implementation.

Oh WOW blast from the past. And a good one! Thanks for featuring this, jeeze louise I forgot this even existed...

@Tricky: LOVE the nod to MathNet.

skin color in the database. I was clicking just a few pixels too high and missed the "pink" bar.

I ultimately figured out what I was doing wrong, but the lack of feedback was frustrating. 'Course, now I feel a little like I'm criticizing a Model T for lacking power steering. :P

Haven't played much yet but there's something I noticed that I hope is the only time it occurs...

Some very minor spoilers of the first case below

I first head to the morgue to check the body, find the cloth in his teeth, and the marker numbers on his wrist. I write down the number in notepad, and it occurs to me that maybe it's a phone number, because I had noticed I could use my office phone beforehand. I head back and there is a magical police officer here to tell me directly that it's a phone number, along with the locations of clues for areas I haven't even investigated! While the opening does say that you yourself need to create a theory on what happened in the case, it would be nice if the game did not save you if you were not attentive in your investigation and missed vital evidence. Getting stuck in games is a good thing sometimes.

Guess I'll see in a bit if that keeps happening.

The officer's briefing is a one time event that only occurs after you leave and then return to your desk. When I was writing the walkthrough, it happened after I took a nap in the Lounge. I agree that the officer overshares quite a lot of information, I think the intent is to help beginners get the hang of the game since it is Case 1.

The downside is, like you mentioned, rather than giving a guideline, he basically flat out tells you several of the most important clues. Fortunately, this is the only instance in the case where such an event takes place.

These were fun to play. I agree with the comments on the officer's briefing in the first one especially

As I spotted it a mile off, having read his mother's email

Some of the pictures and stuff in the computer were really good, and as an eq fan I enjoyed spotting a few references through the series.

So 5/5 from me - despite nearly discovering more about orcs than a dark elf could ever want to know. Tricky was well in order to warn about some of the links!

oops, my bad, didn't refresh the page ^^; I see FallOutBoy has posted a solution.

I am getting images that fail to load when I'm trying to make a conviction :(

So I enjoyed the series thus far, even though I have to keep clicking the WayBackMachine bar away.
Except for one thing: the stupid medicine-and-gambling quizzes dat pop up everywhere.
It took me way too long to find ONE answer for the airport-quiz, some gambling-related-answers seem to be obscure terms not in use anymore or used differently. I have read way to much about them and not a single accepted answer.

Okay, I have looked into the HTML code ans it turns out I forgot the American spelling of neighbour. But to be honest, accepting 'eighbor' (thus ignoring case) but not 'neighbour' is plain mean.

It should be pretty obvious that the original point of those questions is that you use the search machines to look up medicine and take up gambling.
The biggest beef I have with these quizzes is that they take you completely out of the game, especially for the more obscure answers.
It's a shame, because the games are still fun, even though they are very old. Some old treasures are VCRs, pre-Google search machines, computers with built-in keyboards, tapes and rotary dial-phones. The cases do not have their kiddie gloves on with respect to their contents (especially the corpse in case 5!), but the puzzles are straightforward.

3,153 Views
0 Comments
chrpa— Jayisgames needs your help to continue providing quality content. Click for details Welcome to the Roundup 34 with three games! As mentioned in the previous roundups, only odd-numbered episodes are featured since even-numbered are for Robin Vencel's patrons. More...  ...

4,405 Views
0 Comments
chrpa— Jayisgames needs your help to continue providing quality content. Click for details Welcome to Weekday Puzzle! The first game by M42 Studio is purely relaxing playing with shapes absolutely not demanding. In Rob Alvarez's puzzler you need to use...  ...

5,180 Views
7 Comments
chrpa— Jayisgames needs your help to continue providing quality content. Click for details Hello, it's Wednesday again and a new Weekday Escape here! We still have halloweenish games - some devs are a bit late, as every year, and so...  ...

3,596 Views
1 Comment
chrpa— Jayisgames needs your help to continue providing quality content. Click for details Welcome to Mobile Monday! After a few months, a new lovely Nicolet's game is out and you can return to their cute rodents' world. With APARTMENT BACON...  ...