'Come on, big money, no whammies!' An entry in the 2015 Indie Game Maker Contest for a shot at more than $25,000.00USD, Sapiboong's new combat-free chibi adventure game Stock Trader Hiyo! looks every bit the part. Responding to wave after wave of human heroes looting and pillaging the Japanese monster world, these mythological creatures have taken a page from the human realm's playbook and established their own fantasy corporate empires in what must be the most extreme example of 'the weird turn pro' ever. Enter Hiyo, a plucky storybook chickadee who's out to make his fortune playing the monster stock market, but who's also utterly clueless about what stock markets even are or the intricacies of the corporate financial world. Fortunately his friends provide him — and you! — with a handy tutorial and it's up to Hiyo to dig around three different — and boy howdy, do we ever mean different! — otherworldly corporations in the hopes of gleaning some rare and valuable insider stock trading information. 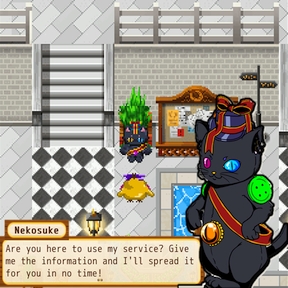 Sapiboong masterfully uses RPG Maker in an unconventional way to supply you with the creative and original adventure story they intended. Foregoing all traces of combat and nearly every role-playing game stat, even the title screen is adventure-based rather than menu-based! Use the [arrow] keys to maneuver, [Z] to confirm, [X] to cancel and [Esc] to bring up the menu. Dash around making casual conversation with netherworld spectres, vivacious angel fashion models, a very lovelorn hydra, and storybook animals in an attempt to get past the corporate facade and determine what's really going on in these companies. Often it'll vary drastically from the image they're portraying to the public, and there may be ways to act on that information to improve their effectiveness — and their share prices! — or to right some hidden shady goings-on which will also affect their share value in ways you can make the most of yourself. 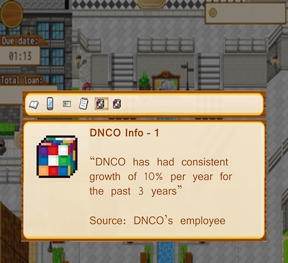 Besides just confabbing with the colorful and outlandish NPCs, exploring the corporations, and making the world a better place, characters will occasionally give you inside info that's useful in-game and depicted as jumbled puzzle cubes in your inventory representing each item of data. They're in number sequence for each company, and the last one always displays as a solved puzzle cube instead, so it's easy to determine when you've gotten all the goods on a company. Whenever you feel ready you can hustle these over to the debonaire Nekosuke, a business-minded cat who will spread the information around for a nominal fee which will in turn cause the company's share prices to climb or plummet. The severity will be affected by the credibility of the source, and also whether you couple the information with 'macroeconomy info', more generalized data you can glean here and there about what trends are forming broadly in the monster political and financial world. 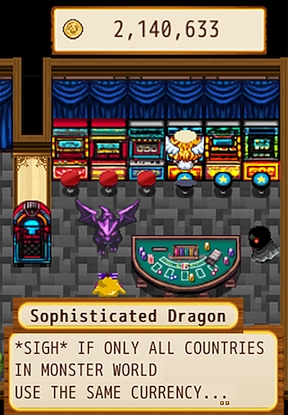 Your childhood friend Bunny just happens to run an underground casino where the very elite monsters meet, and buying a VIP pass will grant you access to some eyebrow-raising macroeconomy information. When you're feel confident enough to play the stock market, a very enthusiastic loan shark will be more than happy to provide you with a secured or an unsecured loan for spans of about a minute and a half of game time, and you'll need to pulse around frantically buying up stock, using your inside information with Nekosuke, checking the stock price effect, unloading your shares, repeating the whole process as many times as you can and then making a mad dash back to the loan shark to pay it all off before he makes you chiken fricassee. Seriously, it's one of the more bizarrely amusing desperate romps we've encountered since the Alice in Wonderland-themed obstacle course at the last Jay Is Games company picnic. Incidentally, do leave us a message in the Comments section if you know how to get out treacle stains. 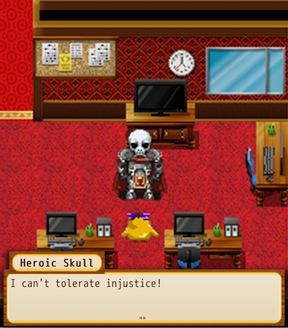 No one-trick pony, Stock Trader Hiyo! brings together plenty of adventure gaming in a role-playing format with a stock market simulation element that provides a sense of achievement. After all you're attempting to nab a spot among the top three richest monsters in the world, though with all the beautiful scenes, memorable characters and kawaii dialogue somehow racking up the numbers never feels like much of a priority. With 13 unique endings and the Best Ending only achievable once you've uncovered and used all of the 36 pieces of info, we'd hunkered down ready for a long and grindy spate of fetch-questing only to find that the characters and storyline made the actual gameplay here its own reward. Offered at the very best price of all — free! — Windows users ready for compelling, outre storylines and willing to forego the usual combat sequences found in role-playing games will definitely want to check this one out.

I didn't like the game, I spent 10 mins reading boring text until I closed it. The dialog sound is really annoying, my girlfriend asked me to mute the game as she cannot stand at the sound.