Subway Surfers is a third person endless running game similar to Temple Run. The inspector and his dog are prowling the subway tracks, but you and your friends are bent on getting your graffiti on the walls. The fuzz inevitably stumbles across your artwork, kicking off an epic endless running scenario where you slide between trains, glide across power lines, duck beneath road blocks and fly your hoverboard across the tracks. 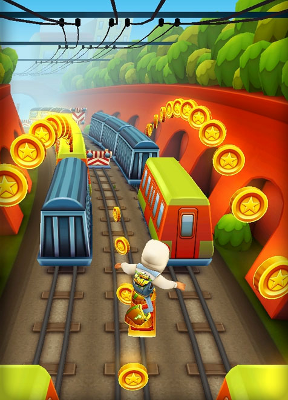 There are three lanes you can run along, switching between left, middle and right with a quick horizontal flick of the screen. Jump to avoid low-hanging obstacles, and swipe down to slide and pass through small gaps. Subway Surfers lets you combine these moves in a very elegant way, opening the door to half-jumps interrupted by slides and leaps that span lanes so you can keep running on top of the subway trains without interruption. It's all pulled off in a very seamless fashion, avoiding awkward lags or frustrating last second "not your fault" screw-ups that end the game prematurely.

An endless running game isn't just about the running, however. Power-ups can be nabbed that help you collect coins, increase your speed, or give you a boost to clear obstacles on the track. There are also missions to complete that add more dimensions to the game apart from "keep running", such as collecting 500 coins or scoring a certain number of points. Simple stuff, but it encourages you to take chances and increase your skills as subway surfing.

There are two currencies to keep your eye on, both of which can be refilled through regular play or via in-app purchases. Keys serve as simple continues so you don't have to start over from the beginning each time you fail. Coins let you buy items in the shop, refill your hoverboard charges, and even upgrade your sneakers, magnet and jetpack one level at a time.

Subway Surfers shares a lot with its 3D endless running cousins, but that doesn't detract from the fact that it's a very well-made game. The controls are top notch, bringing the free-flowing feeling of actually surfing the subway while staying as simple as can be. The in-app purchases are unobtrusive, as well, clearing the way for you and your graffiti pals to get some real work done!