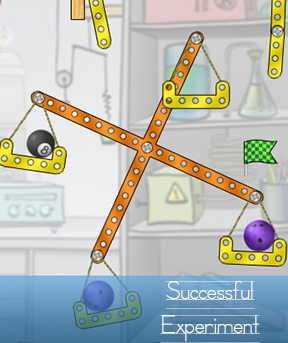 When I was a kid, occasionally for my birthday or Christmas or whatever I'd get a science experiment kit. It doesn't matter that the "experiments" mostly proved already known principles like "you can make a potato into an impractical battery" and "if in a fit of scientific zeal you use all the potatoes in the house that mom was planning to make for dinner you're going to get it". These things didn't matter, because it was all FOR SCIENCE! A magic phrase indeed. Oh sure, you could say that Successful Experiment by Toffee Games is just another physics-based puzzler where you fiddle around with balls and targets, but just check out that sweet laboratory set you've got as a background, and the Einstein-look on the logo character. You're fiddling around with balls and targets for science.

You're presented in each level with an eight-ball and a green flag, and your goal is to get the ball to the flag, via ramps, water hazards, bridges, and whatever else is around. Your only tools of manipulation are bowling balls, basketballs, and bubbles. Bowling balls are heavy, but sink; basketballs float in water and are medium-weight; bubbles float upward. You are given a certain number of each kind of ball and must figure out how and when to release them to guide the eight-ball to the flag.

There are only 18 experiments in the game, and they must be beaten in order, which is a bit of a drawback as the difficulty level seems to go up and down. Some levels are more focused on careful placement, others on planning, others on timing, and the most fiendish of all require all three. The physics is handled well, and I really like how there usually is more than one solution for an experiment. You're usually given more balls than you need, and as long as you get the eight ball to the flag, the game accepts it as a solution, so you can do things in an absurd and inefficient way if you prefer. It's a fun little coffee break game for when you want to drink your coffee and play a game... for science.

You're the luckiest guy on earth for even getting to 14, SonicLover, since there's no way to actually beat 12 except by random chance.

I'm so fed up with badly done physics games that I actually took the time to screen-cap the placement of the bowling ball from the walkthrough video, blow it up to the exact size of the game window, and place windows on my screen to mark the exact horizontal & vertical measurements the guy playing the walkthrough used. And I still can't get that stupid basketball to hit in the right spot to complete the level after 50+ tries.

Any physics game that is so utterly dependent on luck is broken, I say. Well, at least that level is. The rest of it was OK, as these games go.

You don't have to hit the screw down directly. It's actually being held in place by the propeller-thing, which turns counter-clockwise on its own

Bubbles are your friend.

Use bubble to lift screw to jam windmill again

I liked that - short sweet with some good level design.

12 Can't be done even if you ape the walkthrough video exactly.

You folks that made it to 14 must be supremely lucky.

Nice game, I only wish it had more than 19 levels.

I don't know what the walkthrough shows, but (I think this is right) I dropped a bowling ball from about 2/3rds, launching a basketball.
It took me two or three tries.

For experiment 14 (a different answer from what other people have said):

You don't need three bowling balls to push the middle screw down. One basketball followed by two bowling balls will do the trick.

In the walkthrough I found, the beachball hit the second horizontal from the bottom.

nevermind - 16 done - it's much easier than i was making it

Sure this isn't the best physics puzzle game out there but they tried. My only major complaint about the game is the star system. Sometimes they give you no stars other times 3. It seems very random and doesn't tell you what you need to do to get a full 3 stars for each puzzle. I didn't get 3 on everyone but anyone who has, is there any benefit to it?

Kinda addictive!
x16 is doing me in though. Easier you say, lydocain?
?

Drop bowling ball from height to give 8 ball some momentum.

It's not too difficult but takes a bit of experimentation to get right.

Bummer. Another cute phuzzler that turns out to be a timing game.

I guess I've played enough Angry Birds that I found I can do 12 pretty simply.

Level 12 does require a bit of luck, but I can easily succeed about half of the time... *wonders if there was some trolling going on*

stuck on experiment 11. Any help?

@Person: The top ramp can be done beforehand.

You need to drop the yellow bit without it falling all the way down.

You need to raise the yellow part so the 8 ball can travel down it without obstructing the way.

After getting the 8 ball rolling, use a bowling ball in the yellow cup part as soon as it hits the lower yellow ramp part.