Meetreen Games' Swapster is a physics puzzle game whose premise might ring a bell. The goal is to remove all the nasty shapes and keep the good ones, which is a concept that has been done before several times, but there's a twist. Your incredibly under-qualified and is that security badge written in crayon can I see some other form of ID please scientist, who caused this mess when he accidentally spilled some radioactive goop on his sentient shapes, has a teleportation ray gun you can use to swap the positions of any two objects. How can this help? Well, aside from potentially plonking a scowling shape down on a slope that could send them sliding off the screen, it also activates explosive cubes, which will trigger on a swap and blast anything nearby away from it. Make no mistake, as physics puzzles go Swapster is still a fairly simple one, but one that offers a lot of charm and polish. In fact, by forgoing a lot of bells and whistles or piling on new elements, Swapster actually feels like a cleaner and smarter little game. 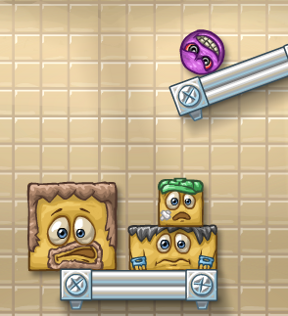 Levels are tidily designed so that figuring out a solution feels like strategy rather than guesswork or relying on finicky physics, making swaps on the fly to utilize momentum or balance in just a few moves rather than triggering elaborate chain reactions the way some other games in the genre prefer. Of course, this does mean that Swapster can sometimes feel repetitive given the relatively small scope and lack of complexity in its stages. It's the sort of game you enjoy your time with, but probably won't spare much thought for after you're done, which is a bit of a shame given how nice it is to find a game that's simply well constructed in almost every way. The difficulty curve is satisfying and accessible, though some of the levels that require more timing and reflexes feel a bit at odd with the slower, thinky pace of the rest. Still, with its great presentation and clever level design, Swapster is well worth a play, and a reminder that you don't need a whole lot of extraneous elements to be engaging, intelligent, and fun.

Level 28 has me completely stumped. Does anyone have a hint?

Hi,
Thanks for great review!
About level 28, check walkthrough video there: http://www.youtube.com/watch?feature=player_embedded&v=X6MU6Mne8as#t=293

swap long block with that purple again after it have fall
3.

swap long block with the bomb